Malaysia Airlines (Kuala Lumpur) flight MH 370 (operated with the pictured Boeing 777-2H7 ER 9M-MRO, msn 28420) departed Kuala Lumpur at 0041 local time on March 8 bound for Beijing, China. The flight has gone missing and did not enter Chinese airspace.  Radar contact was lost with the aircraft near Vietnam airspace over water (Gulf of Thailand). The aircraft was last reported to be flying at 35,000 feet. There was no communication from the crew about any problem. Search and Rescue units are now searching for the aircraft.

However no debris has been located.

There are now reports that at least two stolen passports were used to board the aircraft which is now raising the question that this may have led to a possible terrorist attack.

The Telegraph explores this issue (along with a picture of the oil slick): CLICK HERE

Phu Quoc Island is on the border of Vietnam and Cambodia, southwest of Phnom Penh and west of Ho Chi Minh City (Google Maps): 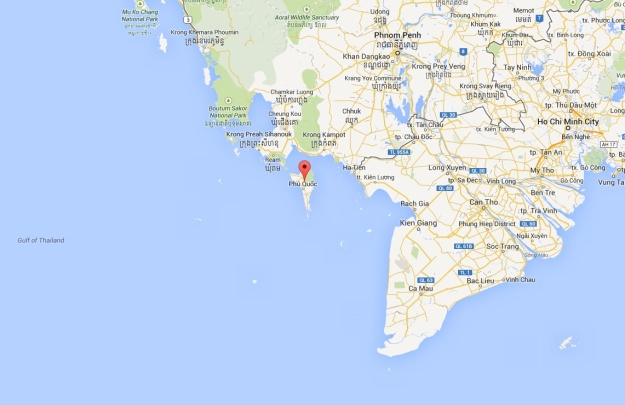 The airline initially issued this statement:

We deeply regret that we have lost all contacts with flight MH 370 which departed Kuala Lumpur at 12.41 am earlier this morning (March 8) bound for Beijing. The aircraft was scheduled to land at Beijing International Airport at 6.30 am local Beijing time. Subang Air Traffic Control reported that it lost contact at 2.40 am (local Malaysia time).

Flight MH 370 was operated on a Boeing 777-200 aircraft. The flight was carrying a total number of 239 passengers and crew – comprising 227 passengers (including 2 infants), 12 crew members. The passengers were of 13 different nationalities. Malaysia Airlines is currently working with the authorities who have activated their Search and Rescue team to locate the aircraft. Our team is currently calling the next-of-kin of passengers and crew.

Focus of the airline is to work with the emergency responders and authorities and mobilize its full support. Our thoughts and prayers are with all affected passengers and crew and their family members. The airline will provide regular updates on the situation.

The airline will provide regular updates on the situation. Meanwhile, the public may contact +603 7884 1234 for further info.

Malaysia Airlines is still unable to establish any contact or determine the whereabouts of flight MH 370. Earlier today (March 8), Subang ATC had lost contact with the aircraft at 2.40 am. The last known position of MH370 before it disappeared off the radar was 065515 North (longitude) and 1033443 East (latitude).

We are still trying to locate the current location of the flight based on the last known position of the aircraft. We are working with the International search and rescue teams in trying to locate the aircraft. So far, we have not received any emergency signals or distress messages from MH 370. We are working with authorities and assure that all sources are deployed to assist with the search and rescue mission.

The passenger manifest will not be released until all families of the passengers have been informed. The flight was carrying a total number of 239 passengers and crew – comprising 227 passengers (including 2 infants) and 12 crew members.

We are deploying our “Go Team” to Beijing which will depart Kuala Lumpur International Airport at 4.30 pm with a team of caregivers and volunteers to assist the family members of the passengers.

The passengers are of 14 different nationalities. All crew on-board are Malaysians.

Please take note that the earlier statement did not include the number of Indian nationals. This was due to confusion between the country code of Indonesia and India.

The below table shows the latest number of passengers and their nationalities:-

Our focus now is to work with the emergency responders and authorities and mobilize our full support.

Our thoughts and prayers are with all affected passengers and crew and their family members.

Malaysia Airlines humbly asks all Malaysians and people around the world to pray for flight MH 370.

It has been more than 24 hours since we last heard from MH 370 at 1.30 am. The search and rescue team is yet to determine the whereabouts of the Boeing 777-200 aircraft.

An international search and rescue mission from Malaysia, Singapore and Vietnam was mobilized this morning (March 8). At this stage, they have failed to find evidence of any wreckage. The sea mission will continue overnight while the air mission will recommence at daylight.

We are dispatching all information as and when we receive it. The situation in Beijing is also being monitored closely. As many families of passengers are in China, we have deployed our “Go Team” to Beijing with a team of caregivers and volunteers to assist the family members of the passengers.

Immediate families of passengers are advised to gather at Kuala Lumpur International Airport. Travel arrangements and expenses will be borne by Malaysia Airlines. Once, the whereabouts of the aircraft is determined, Malaysia Airlines will fly members of the family to the location.

Our sole priority now is to provide all assistance to the families of the passengers and our staff. We are also working closely with the concerned authorities in the search and rescue operation

We will update this initial report with more information as it becomes available.

Satellite Weather – Southeast Asia from Meteoblue. The current weather appears to be mostly clear over Vietnam: