Qatar Airways has looked back on its achievements in 2018:

As the first airline in the world to take delivery of the Airbus A350-1000 in February 2018, Qatar Airways proved once again that it leads where other airlines follow in providing passengers with the most technologically advanced aircraft available. As well as receiving the first Airbus A350-1000, the airline received 25 additional aircraft to the fleet throughout the year, increasing the total number in its fleet to 226.

Qatar Airways Group Chief Executive, His Excellency Mr. Akbar Al Baker, said: “Our achievements in 2018 prove that Qatar Airways has not wavered from its strategy and vision of constant growth and development, in order to provide our passengers the finest onboard experience every time they travel. We have demonstrated that we will not rest in our determination to push the boundaries in redefining the travel experience for each and every one of our customers.

“As we conclude 2018, we remain committed to setting the highest standards of excellence and quality in the industry, and look forward to welcoming an exciting 2019.” 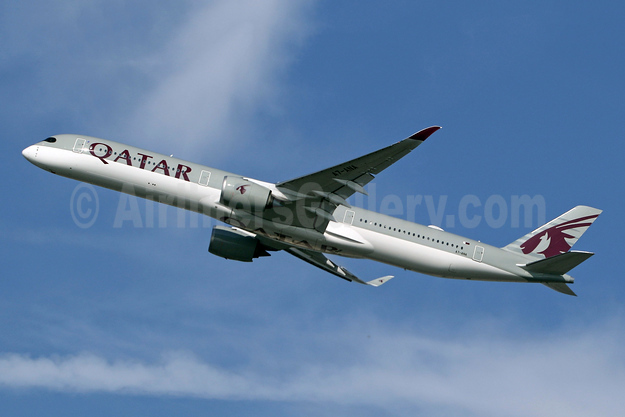 A350-1000: In February, the airline took delivery of the world’s first Airbus A350-1000 as the global launch customer of the world’s most technologically advanced aircraft. The new A350-1000 went into full commercial service on the airline’s Doha-London route, on which the A350-900, the A380, Boeing 777 and 787 Dreamliner already operate, offering six flights a day between Qatar and the United Kingdom’s capital to Heathrow Airport and 16 weekly flights to London Gatwick. It is the first Airbus aircraft to be fitted with Qatar Airways’ revolutionary Qsuite Business Class seat. In October, the aircraft was added to the airline’s New York route.

Cargo: 2018 was a highly successful year for the airline’s Cargo division, with cargo volumes having increased by 10.6 per cent in 2018 compared to 2017. The highlight has been the launch of transpacific services, direct from Macau to Los Angeles and Mexico City. The new freighter service demonstrates the carrier’s commitment to customers in helping their business grow, offering them reduced flight times and quicker service without a stopover in Doha.

Sponsorships: The airline signed a record-number of sporting sponsorships with top-tier teams in 2018, further cementing Qatar’s role as a global centre for sport.

AS Roma: In April, Qatar Airways signed a multi-year partnership agreement with Italian football club AS Roma, further strengthening the award-winning airline’s commitment to Italy. The agreement, the largest ever signed by the club, sees Qatar Airways become AS Roma’s Main Global Partner, with the airline’s logo to adorn the team’s shirts through the 2020-21 season.

Boca Juniors: In May, Qatar Airways became the Official Jersey Sponsor of the world-renowned Argentinian football club the Boca Juniors through the 2022/23 season. The new partnership further strengthens Qatar Airways’ global partnership portfolio and will see the airline’s logo proudly appear on the club’s jerseys, allowing the Qatar Airways brand to be seen by millions of football fans around the world.

Barclays: In October, Qatar Airways became the Official Global Airline Partner of the NBA’s Brooklyn Nets and the team’s home, Barclays Center, the Brooklyn, New York venue that hosts many of the world’s most exciting entertainment and sporting events. This marks the first major partnership between the airline and an NBA team or venue.

CONMEBOL: In October, Qatar Airways became Official Global Airline Partner of The South American Football Confederation (CONMEBOL), adding another strong sporting partnership to its expanding portfolio. As part of the agreement, Qatar Airways will be the sponsor of CONMEBOL’s professional football club competitions across South America for the next 4.5 years, with immediate effect through 2022, including the Copa CONMEBOL Libertadores, South America’s most prestigious football competition, as well as the Copa CONMEBOL Sudamericana and the CONMEBOL Recopa.

FIFA 2018 World Cup Russia: As the Official Partner and Official Airline of FIFA, Qatar Airways brought football fans from around the world to Russia for the 2018 FIFA World Cup RussiaTM, one of the most highly-anticipated events on the global sports calendar.

Oryx Kids Club: In March 2018, Qatar Airways launched the Oryx Kids Club, designed to encourage children to explore the world by making their in-flight experience even more fun and inspiring. As part of the club, the airline introduced five new hero characters: Orry the Oryx and his twin sister, Orrah; Kamil the Camel; Faaiz the Falcon, and Farah the Desert Fox. Oryx Kids Club offers an enhanced experience for its youngest travellers by providing them with specially designed plush toys, activity packs, and special meal boxes featuring their favourite super heroes from the Oryx Kids Club.