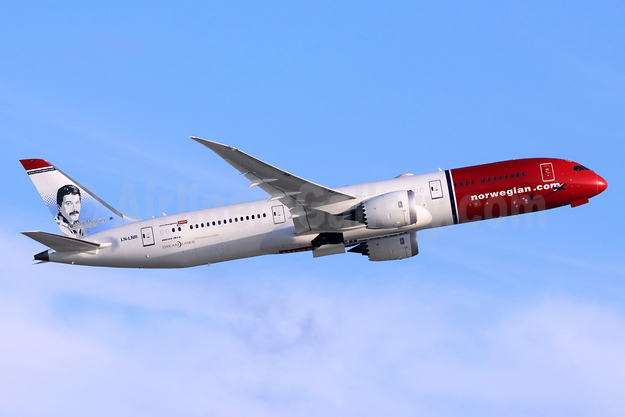 Norwegian’s second quarter results are characterized by reduced growth and improved profitability, in line with the company’s strategy. Despite the reduced production growth and grounding of the Boeing 737 MAX aircraft, the underlying operating result before ownership costs more than doubled from the same quarter in 2018.

The underlying operating result before ownership costs was more than 2.3 billion Norwegian kroner (NOK), the highest ever in a second quarter and NOK 1.2 billion higher than last year.The unit revenue (RASK) increased by 13 percent, and the revenue per passenger per kilometer (yield) increased by 11 percent. For the second quarter, the total revenue was more than NOK 12 billion, an increase of 19 percent from the same period last year, primarily driven by intercontinental growth. Almost 10 million passengers flew with Norwegian this quarter, on par with the same quarter in 2018. The load factor was 88 percent, up 1.2 percentage points from last year.

Norwegian’s key priority is returning to profitability through a series of measures, including an optimized route portfolio and an extensive cost-reduction program. The production growth (ASK) in the second quarter was six percent, down from the peak growth of 48 percent in the second quarter of 2018. The company’s internal cost reduction program #Focus2019 continues with full effect and achieved cost reductions this quarter were NOK 554 million, consequently reaching the goal of NOK 1 billion so far in 2019.

“Norwegian’s Q2 results show that we are delivering on our strategy of moving from growth to profitability. Despite operational issues outside of our control, like the grounding of our 737 MAX fleet, we are delivering the highest second quarter operating revenue in the history of Norwegian. I am also pleased with the booking figures for the coming months, especially on long-haul,” said CEO of Norwegian, Bjørn Kjos.

During the second quarter, Norwegian has introduced four Boeing 787-9 Dreamliners to its fleet. With an average age of only 3.8 years, Norwegian’s fleet is one of the most fuel efficient and most modern in the world.

MAX update
In March, Norwegian temporarily suspended operation of 18 Boeing MAX 8 aircraft. The company has combined flights, booked customers to other departures within Norwegian’s own network, consequently reducing the impact on passengers. The company will continue to limit passenger disruptions by also offering flights with wetlease companies whenever necessary.

The 737 MAX grounding has affected both demand, operating expenses and production negatively. Norwegian expects the negative impact on the 2019 results to be approximately NOK 700 million.

In other news, CEO Bjorn Kjos (above) has stepped down.

After 17 years as the CEO of Norwegian Air Shuttle, Bjørn Kjos will leave the position and continue in a new role as an advisor to the Chairman, with effect from July 11th. Until Norwegian appoints a new CEO, CFO Geir Karlsen will act as interim CEO, while Chairman Niels Smedegaard will take on a more active role in the management.

“I am very pleased Bjørn will remain at the company as an advisor to the Board and the Chair. As Norwegian moves from growth to profitability, it will be an advantage for the company to benefit from Bjørn’s extensive network, in-depth knowledge of and experience with global aviation. We have already started the process of recruiting a permanent new CEO,” said Niels Smedegaard, Chairman of the Board of Directors at Norwegian.

“I am confident that the Board of Directors will find the best qualified successor to lead the next chapters of the Norwegian story together with the top management team. Leaving the exciting future tasks to a new CEO and taking on a new challenge as an advisor, is a set-up I am very happy with. I look forward to spending more time working on specific strategic projects that are crucial to the future success of Norwegian,” said Bjørn Kjos.

Bjørn Kjos is one of the founders of Norwegian Air Shuttle. During his tenure as CEO, the company has developed from a small domestic operation with 130 employees and four aircraft to a global and award-winning low-cost airline with more than 11,000 employees and 162 aircraft.

“Bjørn has played an unprecedented role in Norwegian’s success. His vision of offering affordable fares for all, combined with his enthusiasm and innovating spirit, has revolutionized the way people travel for pleasure and for business, not least between the continents. Bjørn is definitely one of the most influential European entrepreneurs of our time,” Smedegaard said.

Following a demanding period of financial and operational challenges, fueled by significant investments, Norwegian changed its strategy from growth to profitability in 2018. Going forward, the company will harvest from its rapid global growth and investments. Running a profitable business and boosting company value to the benefit of shareholders, customers and employees will be key for the CEO going forward.

“We have to ensure that Norwegian is well prepared and positioned to handle volatile markets and unexpected events. It is crucial that we continue to deliver on our cost reduction initiatives and that we constantly ensure that we have a route portfolio that yields profit. It is also important that the new CEO develops an organization that embraces continued improvement and operational excellence,” Smedegaard added.