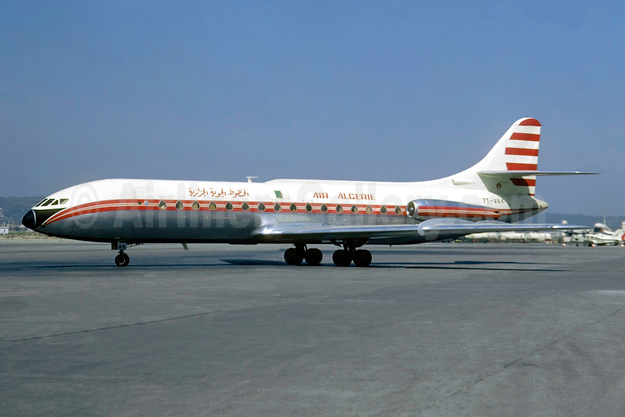 Air Algérie has been gradually placing its last three operational Boeing 767-300s (7T-VJG, 7T-VJH and 7T-VJI) on a reserve back-up status. The last known revenue flight was on September 15, 2018 with 7T-VJI.

This month all three have been sold and have been ferried to Brooksville, FL for storage via Portsmouth, NH.

The first of three ATR 72-600s ordered earlier in 2014 will join an existing fleet of 12 ATR 72-500s currently operating at the airline. The deliveries will continue until June 2016.

Air Algerie first ATR flew for the first time in 2003.

Swiftair (Madrid) McDonnell Douglas DC-9-83 (MD-83) registered EC-LTV (msn 53190) operating for Air Algerie (Algiers) as flight AH 5017 from Ouagadougou, Burkina Faso to Algiers with 110 passengers and 6 crew members is missing. Contact with the airliner has been lost over Mali near Gao about 50 minutes after the takeoff. Both airlines have announced they have lost contact with the crew.

According to Reuters, the country of Burkino Faso stated the flight had asked ATC to alter its course due to a storm. There was a known sandstorm in the area according to local reports.

Swiftair said on its website the flight took off from Burkina Faso at 0117 GMT and was supposed to land in Algiers at 0510 GMT but never reached its destination.

Two French Air Force Mirage 2000 jets based in west Africa have been dispatched to try to locate the missing airliner according to Reuters.

Reuters is now reporting the plane has crashed:

“An Air Algerie flight crashed on Thursday en route from Ouagadougou in Burkina Faso to Algiers with 110 passengers on board, an Algerian aviation official said.”

Update: The wreckage has been found near the city of Gao, Mali (see the map below). There are no survivors of the 116 passengers and crew members on board.

Read the full report from The Telegraph: CLICK HERE

Following a meeting with families of the victims, Hollande said flags will fly at half-staff on government buildings from Monday through Wednesday.

Fifty-four of the 118 victims were French nationals.

The second flight data recorder from has been found in Mali, a U.N. official said Saturday (July 26).”

Boeing (Chicago and Seattle) and Air Algerie (Algiers) today announced an order for two Next-Generation 737-700C (Convertible) airplanes, valued at $152 million at current list prices. The order continues Air Algerie’s fleet renewal and expansion following January’s order for eight 737-800s.
The addition of 737-700Cs to the Algerian-flag carrier’s fleet will provide the airline with increased flexibility depending on passenger and cargo demands. The order was booked in May 2014 and previously posted as unidentified on the Boeing Orders & Deliveries website.

Air Algerie (Algiers) has signed a purchase agreement for 3 new ATR 72-600s.  The contract value is $74.1 million at current list price. The entry into service is expected from end of 2014 through 2015. When delivered, the 68 seat new-comers will join an existing ATR fleet at the airline that currently includes 12 ATR 72-500s flying primarily on domestic and short regional routes. The new order will take Air Algerie’s ATR fleet to 15 ATR 72s consolidating its position of the largest ATR operator on the African continent.

Air Algerie (Algiers) and Boeing (Chicag) today announced a commitment for eight Next-Generation 737-800 airplanes. When finalized, the order will be worth $724 million at list prices.

Air Algérie (Algiers) has signed a Memorandum of Understanding (MOU) for three A330-200 passenger aircraft as part of the carrier’s continued growth plans. This order has been placed at Dubai Airshow 2013.

The new aircraft will be deployed on medium and long haul routes from the Air Algérie hub in Algeria. Air Algérie has already ordered a total of five Airbus A330-200s, which have all been delivered to date.

Boeing (Chicago) reached a major milestone with long-time customer Air Algerie (Algiers) this week when it delivered the 50th Boeing jetliner – a Next-Generation 737-800 – to the North African carrier. The 737 was the fourth of seven ordered in 2009. This delivery also marked the 40-year partnership between Boeing and Air Algerie.

Since receiving its first Boeing airplane in March 1971, Air Algerie has expanded to include 18 737s and three 767s.