SATA Azoress Airlines and Binter are working together with a new codeshare agreement:

This possibility occurs thanks to the codeshare agreement established between the airlines.

The connections between the Azores and the Canary islands start July 2 until September 24, 2022 with a weekly flight, operated on Saturdays. The direct connection will open up other opportunities for travellers who want to get to know other islands, thanks to the network of inter-island flights that both SATA Air Açores and Binter operate.

Arriving in the Canary Islands, passengers will have the possibility of connecting to the airports of Lanzarote, Fuerteventura, Tenerife North and Tenerife South on the outbound flight, and on the return flight, with La Gomera, La Palma and El Hierro.

Flights will be operated with an Embraer E195-E2, with a capacity for 132 passengers. The flight will last approximately two hours and ten minutes. 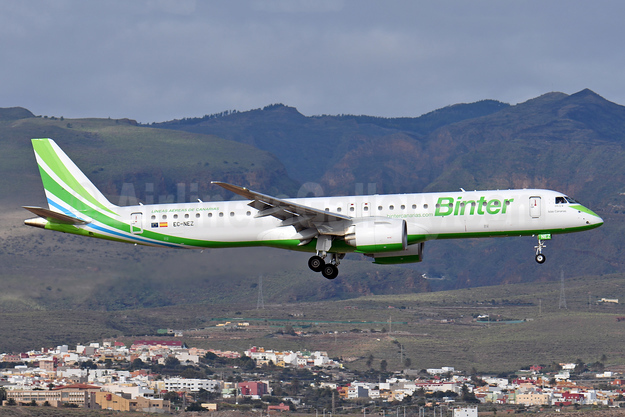 The airports of Fuerteventura, Lanzarote and Tenerife South will have direct flights with Madeira and the connections of Gran Canaria with Marrakech and Agadir are reinforced. The airline reinforces the hub in the archipelago making it possible to connect national and international destinations with Dakar, with a stopover in the Canary Islands

Binter has announced a significant improvement and expansion of the connections of the Canary Islands with Madeira and several destinations in West Africa, such as Dakar, Agadir and Marrakech, from the month of July.

The main novelty of this change of programming is the firm commitment to Madeira, a destination to which Binter began to fly in 2005, when it began its international programming, and in which it will almost double its route programming, going from four in 2021 to seven, with an offer of more than 100,000 seats, which means exceeding by 38% the figure of the previous year.

From July, Binter will open new direct routes with this attractive Portuguese destination from the airports of Fuerteventura, Lanzarote and Tenerife South, in addition to strengthening connections from Gran Canaria, with flights every day of the week. To this is added an unprecedented route outside the Canary Islands, which will connect Marrakech and Madeira in summer, the result of joint work between Binter and the National Tourist Office of Morocco (ONMT).

Position the Canary Islands as a hub for connections with Africa

Another key to the programming presented today by the Canarian company is the creation of an operational hub, with the Canary Islands as an interconnection center, between Dakar and several national destinations – Murcia, Mallorca, Pamplona and Zaragoza – and international – Toulouse, Lille, Turin and Venice -, which is based on the reinforcement of the route between Gran Canaria and the airport of the capital of Senegal and the adaptation of flight schedules to allow connecting routes in both directions.

In this way, from the end of July Binter will have three frequencies a week between Gran Canaria and Dakar, since the flights on Mondays and Thursdays will be added a new frequency on Tuesdays. These flights depart from Gran Canaria at 22:35 hours and make part of the outward journey and the entire return journey at dawn, which facilitates the connection with the flights that have arrived in Gran Canaria that day, on the way to Dakar, and with those that will depart from Gran Canaria to national and European destinations the next day, on the way back from Dakar.

More connections to Agadir and Marrakech

The airline has also announced a reinforcement of the flights scheduled from July with Marrakech, which will have three weekly frequencies with Gran Canaria and one with Tenerife, and with Agadir, which adds one more to reach three weekly. Again, the joint work between Binter and the ONMT has been a key factor for this improvement in connectivity, as in the case of Madeira-Marrakech.

To the flights between Agadir and Gran Canaria on Tuesdays and Saturdays, a new one is added on Thursdays with departure from the Canary Islands at 10:30 am and return from the Moroccan airport at 12:50 pm.

In the case of Marrakech, Binter will offer three direct links from Gran Canaria with a new connection on Tuesdays with departure at 10:30 a.m. and return at 1:15 p.m., which adds to those already made on Thursdays and Sundays. In addition, it also offers a weekly link to Tenerife North Airport – Ciudad de La Laguna on Saturdays.

ATR and Binter Canarias have written another chapter in their long shared history, as the Canary Islands airline signs a firm order for four ATR 72-600 aircraft, with an option for a further one.

The deal marks the final step in Binter’s plan to replace its remaining ATR 72-500 aircraft with the latest-generation ATR. The airline will use the aircraft to ensure the continuation of the vital air links that the ATR fleet has provided. Regional air connectivity has been shown to support economic growth in the communities it serves, with a study showing that a 10% increase in regional flights leads to a 6% increase in local GDP. Thanks to its efficiency and versatility, serving locations other aircraft simply cannot go, the ATR -600 has become the leading turboprop on the market with a share of 75% of orders over the last 10 years.

Binter Canarias has cancelled all flights to the island of La Palma due to the spreading Cumbre Vieja volcano. Three more towns on the island have been evacuated. The volcano has already destroyed hundreds of homes and forced the evacuation of nearly 6,000 people.

La Palma Airport, operated by Aena, stated air traffic was suspended “due to the accumulation of ash” in the air.

The ash cloud from a volcano's week of eruptions caused the La Palma Airport to cancel flights to and from the Spanish island. https://t.co/GehKG36uUo

Binter Canarias is maintaining operations at La Palma Airport despite the active nearby Cumbre Vieja volcano on the island of La Palma in the Canary Islands, Spain.

The airline announced on social media it was monitoring the current wind conditions and would continue to maintain operations on the island if safety permits.

The airline is using the new jets with new routes to Toulouse, Marseille and Lille, in France, and Turin and Venice in Italy.

Binter of Spain celebrates the incorporation of the first Embraer E195-E2 jet into its fleet at a ceremony held on November 21 at Embraer’s main facility in São José dos Campos.

The airline is the first European customer to receive the biggest of the three members of the E-Jets E2 family of commercial aircraft. Binter has placed firm orders for five E195-E2s.

The acquisition of the E195-E2s is part of Binter’s overall fleet modernization initiative.

Each aircraft is configured with 132 seats in single class. The new aircraft will be deployed across a route network that includes eight cities in the Canary Islands, nine cities in Africa and two in Portugal.

Embraer announced today, at the 53rd International Paris Air Show, that it has signed a contract with Binter, of Spain, for two additional E195-E2s, confirming purchase rights from the original contract, signed in 2018. The two new E195-E2s will be included in Embraer’s 2019 second-quarter backlog and have a value of USD 141.8 million, based on Embraer’s current list prices. The airline is celebrating 30 years of operations in 2019.

Binter will receive its first E195-E2 jet in the second half of 2019, becoming the first European customer of the E-Jets E2’s largest model. The airline is configuring the aircraft with 132 seats in a very comfortable single-class layout.

All images by Binter.

Embraer announced that Binter Canarias, of Spain, will receive its first E195-E2 jet in the second half of 2019, becoming the first European customer of the E-Jets E2’s largest model. The airline signed a firm order with Embraer for three E195-E2s. The contract also includes purchase rights for two additional aircraft of the same model.

This agreement was previously announced as a Letter of Intent (LOI) with an “undisclosed customer” at the Farnborough Air Show 2018, in July. With all options being exercised, the contract has a list price of $342 million. The order was included in Embraer’s third quarter backlog of 2018. The airline will configure the aircraft with 132 seats in a very comfortable single-class layout.