Boeing delivered to Saudi Arabian Airlines (Saudia) its first 787-10 Dreamliner, which will play a key role in the airline’s fleet and network expansion. The largest member of the Dreamliner family sets the benchmark for fuel efficiency and operating economics and will complement Saudia’s fleet of 787-9.

With the delivery to Saudia, the 787-10 continues to expand its global presence. More than 30 of this Dreamliner model have been delivered to seven operators since the airplane entered commercial service last year. As a stretch of the 787-9, the 787-10 adds about 40 more seats in a 2-class configuration and cargo capacity, offering 25 percent better fuel per seat and fewer emissions than the airplanes it replaces. With a range 6,345 nautical miles (11,750 kms), the 787-10 can fly more than 95 percent of the world’s twin-aisle routes.

Since entering service in 2011, the 787 family has enabled the opening of more than 235 new point-to-point routes and saved more than 40 billion pounds of fuel. Designed with the passenger in mind, the 787 family delivers an unparalleled experience with the largest windows of any commercial jet, large overhead bins with room for everyone’s bag, comfortable cabin air that is cleaner and more humid, and includes soothing LED lighting.

To optimize the performance of its 787 fleet, Saudia uses Boeing Global Services digital solutions powered by Boeing AnalytX such as Airplane Health Management (AHM), Maintenance Performance Toolbox and Crew Rostering and Pairing to optimize performance, manage global crew schedules and maintain their fleet. Boeing AnalytX is a suite of software and consulting services that transform raw data into efficiency, resource and cost savings in every phase of flight.

Saudia – Saudi Arabian Airlines, the national flag carrier of Saudi Arabia, has decided to expand its existing Airbus A320neo Family order from 35 to as many as 100 NEO aircraft including 35 options. The additional firm order takes Saudia’s order of A320neo Family aircraft to 65 of which 15 are A321XLRs.

Saudia is the biggest Airbus operator in the Kingdom and currently operates a portfolio of 100 Airbus aircraft comprising A320ceo Family and A330ceo. This latest purchase is in line with the Group’s Transformation Program, which includes the establishment and growth of a dual-brand strategy of operating airlines catering to the different customer segments in the Kingdom, the region and beyond.

Saudi Arabian Airlines (Saudia) has announced additional seat capacity and frequencies on a number of its international routes.

The airline currently flies 3 frequencies per week to Singapore from Jeddah, which will increase to 4 weekly, with the addition of one more weekly flight effective October 29 this year.

During the upcoming peak holiday period, two more nonstop flights to Los Angeles will start from December 10 until January 13, 2019 taking it up to five-weekly-flights for a limited time.

Additional seats will also become available on the Manchester route, from the period December 18 to January 13, 2019. The route will be operated with a Boeing 777-300ER during this period, with 115 additional seats per flight. Saudia currently flies to Manchester 5 frequencies per week from Jeddah with a Boeing 787 Dreamliner. Guests flying to Manchester can experience the latest inflight dining service in Guest Class (Economy) – Bistro by Saudia.

With increased demand to Abu Dhabi, Saudia will also begin offering an additional weekly frequency from Jeddah, taking it up to 8 flights per week.

Most flights feature Saudia’s latest state-of-the-art Panasonic inflight entertainment system, and features onboard WiFi and more than 4000 hours of Hollywood premiere and latest television shows, box sets, music, multi-language, international and children’s programming, as well as digital and audio books, and much more.

Since April this year, a free-of-charge WhatsApp texting plan was introduced for all guests to have the convenience of staying connected onboard, regardless of class of travel.*

As of September 15, Saudia has expanded the plan to now include free access to iMessage, Facebook Messenger, in addition to the already available WhatsApp.

Guests traveling with Saudia onboard all flights enabled with WiFi connectivity, will be able to access the social messaging plan through a simple three-step process. To select the service, guests can connect their device to the “SAUDIA_ONAIR” network, and then select the plan and provide an email address in order to activate.

Saudia flies to more than 90 destinations worldwide, with a modern, mixed fleet of 155 narrow and widebody Airbus and Boeing aircraft. The airline’s growing route network and double-digit growth has resulted in highest-ever passenger numbers – flying more than 22 million guests from the beginning of the year until end of July this year. 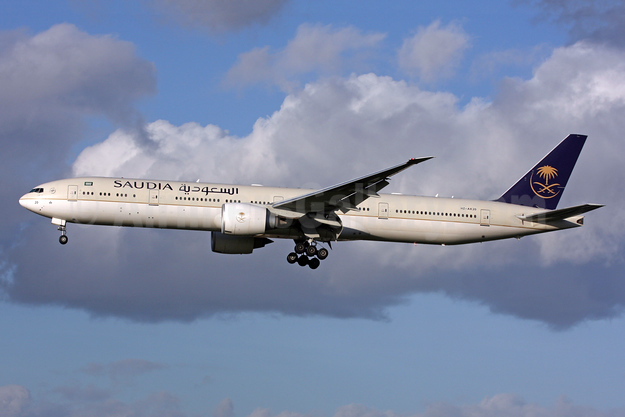 Saudi Arabian Airlines – Saudia introduced a new ‘social messaging’ plan on September 15, 2018 which provides guests – regardless of class of travel – with free access to iMessage, Facebook Messenger, and WhatsApp. 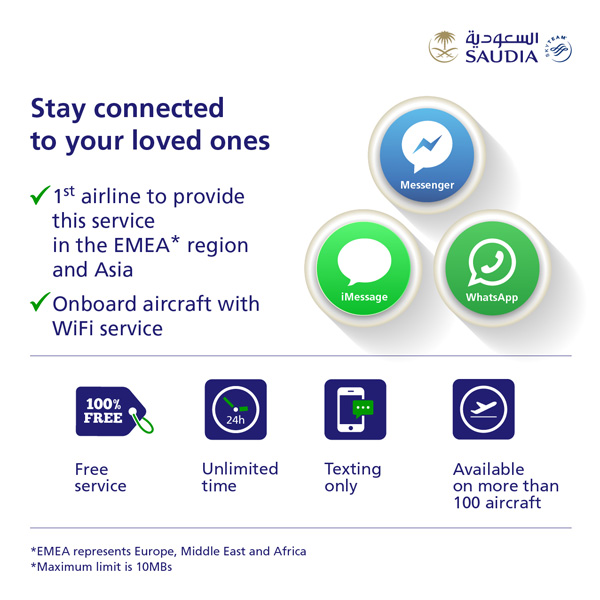 Guests traveling with Saudia onboard all flights enabled with WiFi connectivity, will be able to access the social messaging plan through a simple three-step process. To select the service, guests can connect their device to the “SAUDIA ONAIR” network, and then select the plan and provide an email address in order to activate.

Once the social messaging plan is selected, it will be available for the flight duration*.

More than 100 aircraft in the airline’s fleet feature Saudia’s latest state-of-the-art inflight entertainment systems and features, including onboard WiFi and more than 4000 hours of Hollywood premiere and latest television shows, box sets, music, multi-language, international and children’s programming, as well as digital and audio books, and much more.

Saudia flies to more than 90 destinations worldwide, with a modern fleet of 155 narrow and widebody Airbus and Boeing aircraft. The airline’s growing route network and double-digit growth has resulted in highest-ever passenger numbers – flying more than 20 million guests from the beginning of the year until end of July this year.

Saudi Arabian Airlines (Saudia), the national flag carrier of Saudi Arabia, achieved significant growth in terms of the number of guest numbers and flights during the first half of 2018.half of 2018 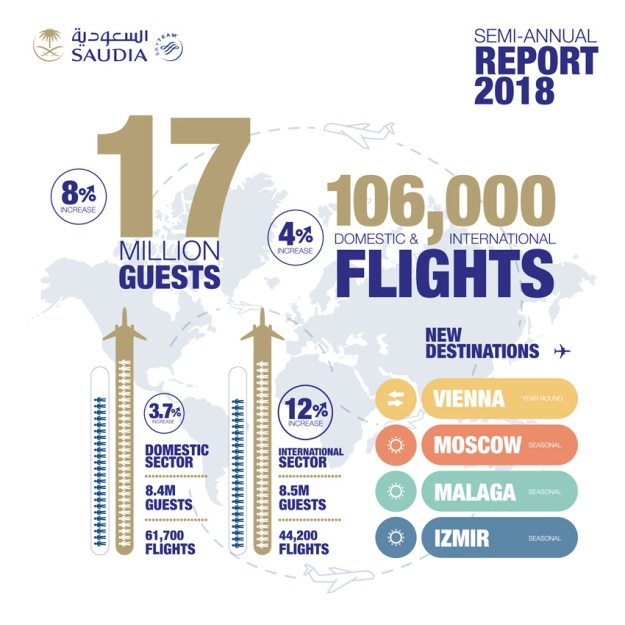 The airline carried approximately 17 million passengers across its domestic and international network. As a result, the carrier’s passenger rate increased by 8% and overall, the number of flights increased by 4%, compared to the same period in 2017.

Passenger traffic grew by 3.7% for domestic and international passenger numbers grew by 12%.

Saudia’s operating performance has recorded ongoing growth in line with the objectives and initiatives of the SV2020 Transformation Program, which was launched in mid- 2015.

These initiatives altogether form the largest program in the history of the airline, which is aimed at growing the carrier’s fleet to reach (200) airplanes by the end of 2020, as well as introducing a new range of product and services enhancements.

The introduction of new aircraft in the Saudia fleet has contributed to the airline reaching its strategic objectives, by adding seat capacity on domestic sectors, as well as expanding its international operations.

Saudia has grown its flight network this year to operate new nonstop flights to a mix of business and leisure international destinations (Vienna, Moscow, Malaga and Izmir).

Saudi Arabian Airlines Director General His Excellency Eng. Saleh bin Nasser Al-Jasser said that the carrier continued to achieve an increase in growth rates in its operating flights during the first half of 2018, which reflects the overall growth in the airline and subsidiary companies and strategic business units.

He added: “The operating performance outlined in the H1 annual report is issued at a time when Saudia is implementing its largest operating plan for the Summer season, which commenced on 23 Ramadan and that it will continue to 27 Dhu al-Hijjah next year. Furthermore, this plan includes running more than 56 thousand scheduled flights in both domestic and international flight sectors, with a seat capacity of more than 12 million. It is also worth highlighting that this plan includes the Hajj and Umrah flights, as well as other flights.”

Eng. Saleh Al-Jasser noted that the introduction of new aircraft to the fleet and operating the fleet at optimal levels have played a key role in supporting the operating plan of the carrier during the current high season. He added that increasing capacity in the domestic market has been a continued focus; ensuring seats are available for a growing traveler base.

Moreover, he stated that Saudia’s fleet is growing substantially (double-digits in a single year), and as a result, flies one of the youngest fleets in the skies.

Al-Jasser added: “Overall, connectivity and access to markets has increasingly become ever-important for trade and tourism. The growth of business opportunities and leisure travel – within the Kingdom and beyond – has been a core driver to offer our guests additional flight choices, with convenient journey times.
Mr. Al-Jasser reinforced that that the national carrier will continue working towards achieving operational performance, such as On-Time-Performance and increasing guest numbers by the end of 2018.

He praised the efforts of all teams across the company and strategic business units of Saudi Arabian Airlines, saying that they have contributed to SAUDIA’s growth. He also affirmed that the airline is planning to continue growing capacity on existing and new routes, in addition to adding new products and services.

The carrier is committed to further developing the aviation industry in the Kingdom, as aviation is one of the Kingdom’s Vision 2030’s focus points for development and investment.

In 2017 the airline carried more than 32 million passengers, registered over 200,000 flights and traveled more than 320 million kilometers. The airline grew its international transit traffic figures by double-digits over last year’s figures, and added 30 new aircraft to its fleet in a single year.

Saudia joined the SkyTeam alliance in 2012 and is one of 20 member airlines.

Saudia Airlines announced on April 17, 2016 the launching of its new low-cost airline subsidiary.

This announcement was made at a ceremony held under the patronage of H.E. Sulaiman Al-Hamdan, President of the General Authority of Civil Aviation (GACA) and Chairman of Saudia Airlines’ Board of Directors, and in the presence of Saudi Airlines Director General along with a number of chief executives of the strategic units of Saudi Arabian Airlines Company, specialized experts and journalists.

Flyadeal is owned by Saudi Arabian Airlines Company and will be working independently from Saudia Airlines by having its own management and strategic plans.

Flyadeal will be a low-cost carrier that is committed to providing high-level services while maintaining the highest safety standards.

The Director General of Saudia highlighted that the trademark for the new company has been registered and its operating license is undergoing with GACA. He added that the airlines will be funded by Saudi Arabian Airlines Company and noted that the launching of the new airline comes after conducting deep studies, internally and externally with the help of consulting experts. He added that Flyadeal will simply travel options and provide high services at affordable prices. Moreover, he highlighted that Flyadeal will not replace Saudia Airlines and its hub will be located in Jeddah.