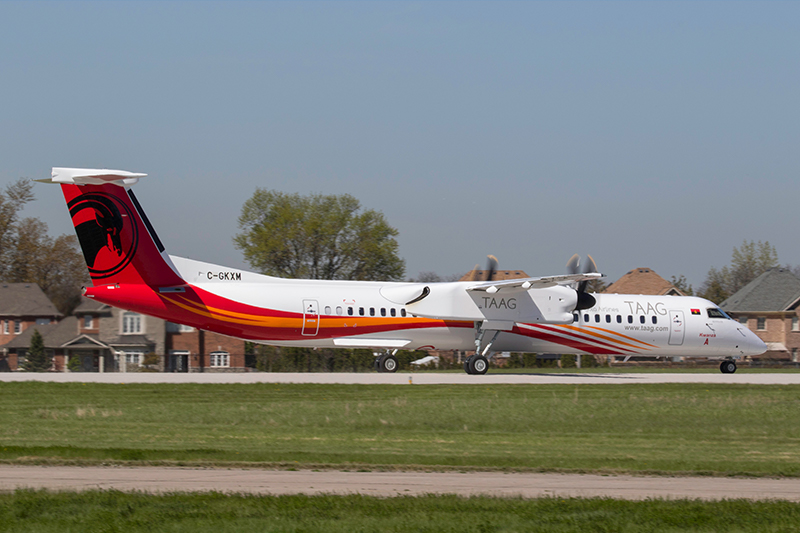 TAAG Angola Airlines is getting ready to take delivery of its first De Havilland Aircraft of Canada Dash 8-400 (formerly marketed as the Q400).

Wearing the temporary registration of C-GKXM, the new airliner also wears a revised livery, will become D2-TFA on delivery. The aircraft also has the name of “Kwanza”.

In other news, the company operated its first cargo-only Boeing 777-300 flight on May 21.

“The flight was an ad hoc departure for cargo only, sending much needed medical, mechanical and perishable supplies to Angola”, according to the airline.

De Havilland Aircraft of Canada Limited announced today that TAAG Angola Airlines E.P. has purchased six Dash 8-400 aircraft. TAAG is the state-owned, national airline of Angola . This order was announced by Bombardier Commercial Aircraft on March 29, 2019 as an order from an unidentified customer.

The disclosure of the previously unidentified customer was done during a press conference today at the 53rd International Paris Air Show, and follows the recent completion of the transition of Bombardier’s Dash 8/Q Series aircraft program from Bombardier to De Havilland Canada. 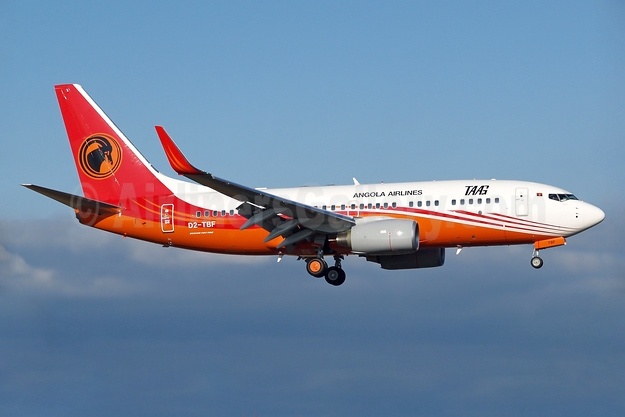 The two airlines will enter into a codeshare agreement of flights operated by TAAG between Luanda and Sal.

This service is a partnership where an airline will carry passengers from another airline through shared code on a particular flight; in this case, passengers with tickets for a Cabo Verde Airlines flight between Luanda and Sal will be carried on a TAAG aircraft.

Emirates and the Republic of Angola, in its capacity as the majority shareholder of TAAG Linhas Aéreas De Angola (TAAG Angola Airlines) (Luanda), announced the signing of a Management Concession Agreement* which will see Emirates take a role in the management of TAAG. The agreement lays the foundation for both airlines to jointly leverage commercial opportunities in Africa and beyond.

This initiative is to further the Republic of Angola’s vision to create a world class Angolan carrier with the support of Emirates. As part of the agreement*, Emirates will work closely with the Angolan government and TAAG Linhas Aéreas De Angola to formulate and implement a business plan, provide management support and devise fleet and route network strategies, whilst bringing synergy through the complementary networks. Emirates will not contribute equity under this agreement* but appoint four senior managers to work for TAAG Linhas Aéreas De Angola.

Both airlines will also cooperate across a wide range of areas including bilateral code-sharing on cargo and passenger services, participation of customers in both airlines’ frequent flyer programmes and passenger and cargo handling. Emirates has also committed to allocate its resources to staff and crew training on best-in-class business and operational processes and systems.

TAAG Linhas Aéreas De Angola will additionally explore business opportunities with DNATA, in particular its passenger and cargo handling, flight catering and travel services. dnata, part of the Emirates Group, is the largest provider of air travel services in the Middle East and employs about 23,000 staff in 38 countries.

Angola is Africa’s second largest oil producer with a strong mining sector, and is one of the fastest growing economies in the world, making it an attractive business destination.

* The agreement will only take effect after a number of conditions have been satisfied, including the receipt of various government and regulatory approvals.

This will be the first Roller Hockey World Cup played in Africa.

TAAG Angola Airlines (TAAG Linhas Aereas de Angola) (Luanda) currently operates three Boeing 777-200s and two 777-300 ERs. The company has three additional 777-300 ERs on order which will be delivered in May 2014, December 2015 and March 2016 according to this report by Macau Hub. The airline also holds options for three more.

Copyright Photo: Nick Dean. Please click on the photo for the full details.

TAAG Angola Airlines (Linhas Aéreas de Angola) (Luanda) is planning to launch a new twice-weekly route from Luanda to Porto in July according to a report by Expansao.

The flag carrier is also getting ready to take delivery of its first (of two) Boeing 777-300 ER.