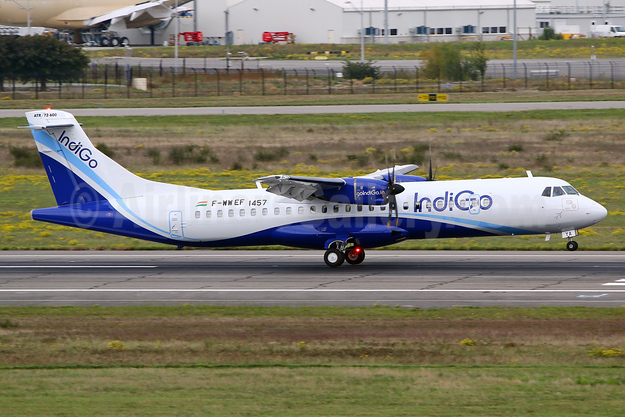 IndiGo Airlines (Delhi) and its co-founders, Rakesh Gangwal and Rahul Bhatia, Group Managing Director of InterGlobe, have signed a Memorandum of Understanding (MOU) for 250 firm A320neo Family aircraft. The agreement will become Airbus’ single largest order by number of aircraft.

IndiGo is celebrating its 8th anniversary.

IndiGo Airlines (Delhi) flight 6E 031 from Delhi to Kathmandu with 175 passengers, one infant and six crew members was evacuated on landing today (March 8) at Tribhuwan International Airport in Kathmandu, Nepal. Smoke and fire was detected in the undercarriage of the Airbus A320 (the pictured VT-IEU) according to The Times of India. There were no injuries in the evacuation.

IndiGo Airlines (Delhi) has taken delivery of its first A320 aircraft equipped with Sharklet fuel saving wing tip devices, becoming the first Indian carrier to do so. Sharklets are newly designed wing-tip devices that improve the aircraft’s aerodynamics and significantly cut the airline’s fuel burn and emissions by four per cent on longer sectors.

Sharklets are an option on new-build A320 Family aircraft, and standard on all members of the A320neo Family. They offer the flexibility to A320 Family operators of either adding around 100 nautical miles more range or allowing increased payload capability of up to 450 kilograms. All future A320 aircraft to be delivered to IndiGo shall be fitted with the Sharklet wing tip devices.

IndiGo, is an all Airbus operator and the largest low cost airline in India today. It began operations in 2006 and has a fleet of 62 A320s today. So far IndiGo’s cumulative order for Airbus aircraft is for 280 A320 Family aircraft including 130 A320neo aircraft.

IndiGo Airlines (Delhi) is considering extending its route map with new routes from Kolkata (formerly Calcutta) to Singapore and Dubai in 2013 according to The Times of India. The carrier currently flies to Bangkok, Singapore, Dubai, Muscat and Kathmandu from Delhi and Mumbai and is adding new flights to Bangkok on December 21 (see map below).

On the financial side, IndiGo lost $17 million in its fiscal year per ATW.

Please click on the map for the full view.

IndiGo Airlines (Delhi) on June 24 conducted the first ever Required Navigation Performance (RNP) approach in regular airline operations, while landing at Kochi on their scheduled flight, 6E 345 from Bengaluru. IndiGo has collaborated with Quovadis, a subsidiary of Airbus, the Airports Authority of India (AAI), and the Directorate General of Civil Aviation (DGCA) to enable an even more secure and safe landing procedure at the Kochi International Airport. IndiGo becomes the first carrier in India authorized to implement this effective, fuel-saving practice. The Kochi International Airport is India’s seventh busiest airport, and equipped with one ILS (Instrument Landing System) on runway 27 and a VOR (both ground based installations) that are used for guidance for landing procedures on both ends of the runway.

IndiGo has been working with Airbus and the government to develop and implement the RNP procedure, which brings great benefits to both the authorities and IndiGo:

The entire process that has been successfully validated on Airbus simulators and in the aircraft, has now been flown successfully in regular commercial operations by IndiGo on its Airbus A320 on June 23, 2012.

IndiGo Airlines (Delhi) due to the problems at Air India and Kingfisher Airlines has now captured second place in India in market share. Of the six largest airlines in India, IndiGo is also the only profitable carrier in India according to this article by International Business Times.

IndiGo Airlines (Delhi) on October 2, 2011, India’s fastest growing airline is all set expanded its international footprint with the launch of daily direct flights on the Mumbai-Bangkok and Mumbai-Dubai routes. During September 2011, IndiGo successfully launched its international flights on the Delhi-Dubai, Delhi-Bangkok and Delhi-Singapore routes.