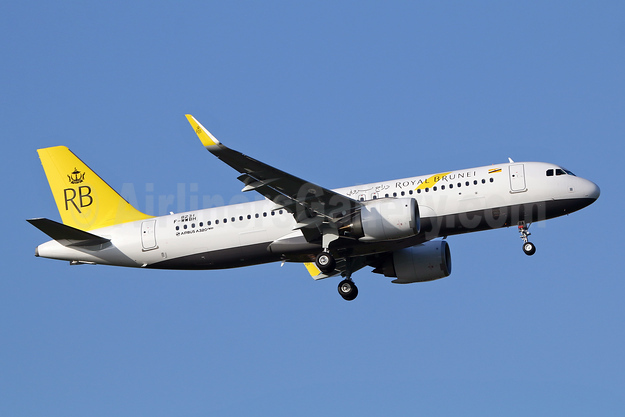 Royal Brunei Airlines has made this announcement on social media:

Thrilled to showcase our new A320neo livery to celebrate the very best of Brunei tourism! Decked with traditional songket patterns and showcasing some of Brunei’s most fascinating landmarks, lush rainforests and stunning underwater scenery.

The aircraft is the first of seven A320neo ordered by the airline under its single aisle fleet renewal programme. Powered by CFM International LEAP-1A26 engines, the new aircraft features a premium three class layout with 12 business class seats, 18 economy plus and 120 in the main cabin. The airline will operate the aircraft on its extensive regional network.

Royal Brunei has been flying A320 Family aircraft since 2003 and currently operates a fleet of six A320ceo jets. 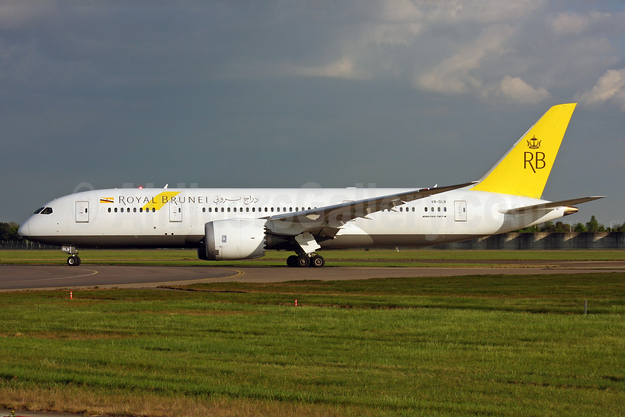 With the introduction of the daily nonstop flights to London, RB will cease operating the Dubai-London-Dubai route. RB will however continue to provide the vital link to the GCC via Dubai and offer four times weekly Brunei-Dubai-Brunei services effective October 29, 2018.

With these changes, RB has also updated its schedule for its Melbourne flights to cater for better connections within its long haul route network. These schedules are subject to slot clearances and government approvals.

RB launched its first flight to London (Gatwick) via Singapore and Dubai in 1990.

On October 28, 2018, RB will launch its daily nonstop flight to London from Brunei.

Royal Brunei Airlines (Bandar Seri Begawan) has signed a contract with Airbus covering the firm order of seven A320neo aircraft plus three options, under the latest phase of its fleet modernization program. Featuring a two class premium layout, the aircraft will be operated on the airline’s regional network linking Bandar Seri Begawan with destinations across Asia. The aircraft will be powered by Pratt & Whitney PW1100G-JM engines.

Royal Brunei Airlines (Bandar Seri Begawan) and Boeing (Chicago) celebrated the delivery of the 787 Dreamliner – the first for the flag carrier of the Sultanate of Brunei and for Southeast Asia. The pictured 787-8 V8-DLA (msn 34785) was handed over to the carrier on October 2.

The new 787 is scheduled to begin flying regionally to Singapore on October 18, with long-haul service to London, via Dubai, set to begin on December 1. Royal Brunei anticipates delivering on its promise of 100 percent Dreamliner long-haul service in the second quarter of 2014 when it will introduce the 787 on flights to Melbourne, Australia.

Video: The building of the first 787 for Royal Brunei:

Royal Brunei Airlines(RB) (Bandar Seri Begawan) revealed a new livery and logo on October 30, 2012 at an event held at Hangar 1, Brunei International Airport. The new livery and logo was revealed
on an Airbus A319, which was painted by RB’s own in-house engineering team.

Prior to the reveal, Royal Brunei Airlines has been releasing teasers of its redefinition of travel to in the local market, both via print and online adverts and the “Smile Squad”; who has been sparking public curiosity over the past two weeks. The Smiles Squad has been spotted in different parts of the country, spreading genuine smiles and good cheer to the public.
 
Mr. Dermot Mannion, Deputy Chairman of RB, said “Over the next year, we will be redefining the Royal Brunei Airlines flying experience, starting with our classic styled new livery and logo. This redefinition is not merely an ad campaign, but rather a long term commitment to our passengers to create a family-like, peaceful and tranquil atmosphere with high class customer service.

The new livery and logo is the first step on RB’s rebranding journey. Over the next year, the national carrier will be rolling out a new website experience (including new social media experience), new uniforms and new lounge and ticket office environments.

The completion of the rebranding process will be timed to coincide with the entry into service of the Boeing 787 Dreamliner on September 1, 2013, making RB the first airline in South-East Asia to take delivery of this ultra modern aircraft.

Royal Brunei Airlines (Bandar Seri Begawan) announced on June 21, 2011 a “Stablization Plan” as the flag carrier concentrates on shorter routes in Asia in order to return to profitability. As part of the plan, service to Auckland, Brisbane, Perth and Ho Chi Minh City were suspended on October 31, 2011. Flights to Kuching were previously dropped in July 2011.

Royal Brunei Airlines (Bandar Seri Begawan) will add the Melbourne, Australia route on March 29, 2010. The new route will be operated with Boeing 777-200s.

Royal Brunei Airlines (Bandar Seri Begawan) has finally added the Boeing 777 to its fleet. Previously an ex-United Airlines Boeing 777-222 (V8-RBU) was painted in April 2007 but was never delivered. Now the state airline is adding six Boeing 777-212 ERs on lease from Singapore Airlines as a replacement for its Boeing 767-300s. The first three have been delivered with the first (V8-BLA, msn 30871) arriving on June 1.