Qatar Airways will add Tashkent, Uzbekistan to its global network with twice weekly flights. The first flight from Doha to Tashkent will take off on January 17, 2022, operated by an Airbus A320 aircraft, featuring 12 seats in Business Class and 120 seats in Economy Class.

Doha – Tashkent (All times in local)

Due to the recent emergence of the new COVID-19 Omicron variant, and with immediate effect, Qatar Airways will no longer be accepting passengers traveling from five Southern African countries in our global network. However, we will continue to accept passengers for travel into these countries in-line with current restrictions.

These restrictions will remain in place until we receive further guidance from the World Health Organization (WHO).

Qatar Airways’ inaugural flight from Doha to Almaty in Kazakhstan landed at Almaty International Airport on Friday, November 19, 2021 (above), marking the launch of the airline’s newest gateway in Central Asia.

The new direct services to Almaty will be operated by an Airbus A320 aircraft.

In other news, Qatar Airways, Official Airline of FIFA, delivered a special fly-by above all eight FIFA World Cup Qatar 2022™ stadiums with the iconic Winner’s Trophy and a special FIFA legend on board, as part of day-long festivities to mark one year until the much-awaited tournament.

The special Boeing 777-300 aircraft (A7-BEB) (below), painted with bespoke FIFA World Cup Qatar 2022™ livery took center stage, carrying the Winner’s Trophy. Cafu, one of the most-capped players in Brazil’s history, a FIFA World Cup™ winner in 1994 and 2002 and a Qatar Legacy Ambassador was there to witness the fly-by and share the excitement of countdown to the iconic event. 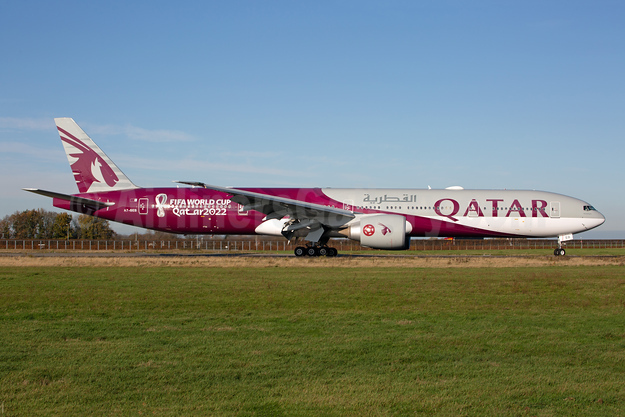 Qatar Airways on November 17 showcased its role as a global launch customer for the latest generation Boeing 777-9 aircraft after welcoming the ultra-modern, fuel efficient jet to Doha International Airport (DIA).

A host of VIP guests joined Qatar Airways Group Chief Executive, His Excellency Mr. Akbar Al Baker, to share in the arrival of the aircraft, which will remain in Qatar before returning to Seattle’s Boeing Field to continue its rigorous test program.

The aircraft, which is anticipated to join the award-winning airline’s fleet in the near future, will be the world’s largest and most efficient twin-engine jet, delivering 20 percent lower fuel consumption and emissions than previous generation aircraft. Key technologies enabling this efficiency are its new carbon-fibre composite wing, new engines and natural laminar flow nacelles.

Qatar Airways and China Southern Airlines has signed a joint Memorandum of Understanding (MoU) confirming a significant expansion of the existing codeshare agreement, and outlining greater benefits and more seamless connections between the two partners.

As part of the collaboration, all future flights between China and Qatar will be codeshared, allowing passengers to benefit from seamless connecting flights. The closer cooperation will also provide greater customer benefits, including increased joint lounge access and a soon-to-be confirmed enhanced frequent flyer agreement. In addition, the two airlines agreed to support the growth of Beijing’s Daxing International Airport, into a leading international aviation hub for both passenger and cargo services.

The enhanced cooperation between Qatar Airways and China Southern Airlines is subject to the lifting of current travel restrictions as a result of the COVID-19 pandemic and regulatory approvals.

The national carrier of the State of Qatar continues to rebuild its network, which currently stands at over 140 destinations. With more frequencies being added to key hubs, Qatar Airways offers unrivaled connectivity to passengers, making it easy for them to change their travel dates or destination as required.

A Qatar Airways Airbus A380 took to the skies for the first time in more than 18 months earlier this week, positioning the aircraft from Doha International Airport (DIA) to Hamad International Airport (HIA) after the airline reluctantly took the decision to welcome the fleet back into operation due to ongoing capacity shortage.

It is anticipated that at least five of the airline’s 10 A380 aircraft will be brought back into service on a temporary basis over the coming weeks to support fleet capacity on key winter routes, including London Heathrow (LHR) and Paris (CDG), from December 15, 2021.

The national carrier for the State of Qatar is currently facing significant limitations to its fleet capacity as a result of the recent grounding of 19 of its Airbus A350 fleet due to an accelerated surface degradation condition impacting the surface of the aircraft below the paint, as mandated by the Qatar Civil Aviation Authority (QCAA).

The airline also recently re-introduced a number of its A330 fleet following a continued increase in capacity requirements due to the easing of travel restrictions and the upcoming peak winter holiday period, which are anticipated to see a return to pre-COVID levels.

Qatar Airways Group Chief Executive, His Excellency Mr. Akbar Al Baker, said: “The recent grounding of 19 Qatar Airways A350 fleet has left us with no alternative but to temporarily bring some of our A380 fleet back on key winter routes.

“These groundings are due to an ongoing issue relating to the accelerated degradation of the fuselage surface below the paint, which as yet remains an unresolved matter between Qatar Airways and the manufacturer for which the root cause is yet to be understood.

“This difficult decision reflects the gravity of the A350 issue and is intended to be a short-term measure to assist us in balancing our commercial needs. It does not signify a permanent reintroduction of our A380 fleet, which were grounded in favor of more fuel-efficient, twin-engine aircraft at the onset of the COVID-19 pandemic.

Qatar Airways made this announcement:

Designed by Qatar Airways in collaboration with  the stylish Italian luggage brand – BRIC’S, the limited-edition amenity kits are made from vegan leather and are offered in two different designs – a pink and white kit for female passengers, and a black kit for male passengers, both with the iconic breast cancer ribbon prints. Each kit includes products from Italy’s Castello Monte Vibiano Vecchio, the environmentally friendly olive oil company, including lip balm, hydrating facial mist, and anti-aging moisturizer in special limited edition ‘pink’ branding.

Qatar Airways Group Chief Executive, His Excellency Mr. Akbar Al Baker, said: “We are dedicated to raising awareness for breast cancer. This month is a reminder of the challenges that members of our Qatar Airways family have had to face, and the importance of support we provide for those diagnosed and in recovery, as we fight together to overcome this disease.

Qatar Airways and RwandAir have signed a comprehensive codeshare agreement to offer travelers more choice, enhanced service and greater connectivity to more than 65 destinations across Africa and the rest of the world. As part of the deal, the Rwandan flag carrier will also launch new non-stop flights between their Kigali hub and Doha from December.

The agreement benefits travelers from across the globe who fly with both airlines, which expands each carrier’s route network. Passengers can enjoy the simplicity of purchasing connecting flights on both airlines using one seamless reservation system, that simplifies ticketing, check-in, boarding and baggage-check processes for the entire journey.

The new codeshare partnership will enable customers to book attractive offers across different continents like the U.S., Europe and Asia, and enable customers to fly to different cities like New York, Washington D.C., Dallas and Los Angeles, London, Zurich and Madrid, Singapore, Kuala Lumpur and Bangkok. The agreement will further increase Qatar Airways’ footprint in Africa, with access to destinations such as Bujumbura, Kinshasa and Lubumbashi.

Additionally, the airlines recently announced loyalty partnerships giving RwandAir Dream Miles and Qatar Airways Privilege Club loyalty members access to each other’s destinations with the opportunity to accrue and redeem miles across their reciprocal route networks. Customers will also have access to the airlines’ airport lounges at their hubs in Doha and Kigali.

Qatar Airways has announced that it will launch a new service to Sharm El-Sheikh, Egypt on  December 3, 2021 with twice weekly flights, this new route will follow the resumption of operations to Luxor on November 23, 2021 with four weekly flights.

In a further expansion of services to Egypt, Qatar Airways will also increase its Cairo service starting from October 1, 2021, increasing flights to the capital to triple daily. The resumption of operations to Luxor and launching of flights to Sharm El-Sheikh sees Qatar Airways now operate a total of 34 weekly flights to Egypt. The new services will be operated by an Airbus A320 aircraft, featuring 12 seats in First Class and 132 seats in Economy Class.

Tuesday and Friday (all times local)

Skytrax has announced the results of its surveys for 2021:

The World’s Top 100 Airlines for 2021 as voted by airline customers around the world sees Qatar Airways ranked No 1, with Singapore Airlines in 2nd and ANA All Nippon Airways in 3rd position.

The 2021 Awards are based on a much extended customer survey period from September 2019 to July 2021, representing a mix of normal travel times combined with travel during the global pandemic.