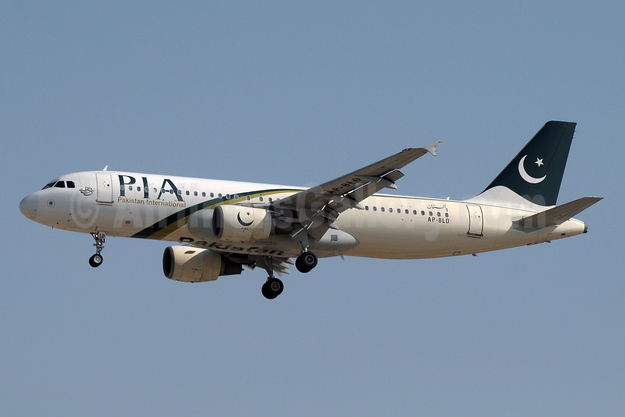 PIA-Pakistan International Airlines Airbus A320-214 AP-BLD (msn 2274) (above) operating flight PK8303 from Lahore to Karachi with 99 passengers and eight crew members crashed today (May 22) on approach to Karachi’s Jinnah International Airport. The aircraft crashed into a residential area.

The airliner had previously aborted the initial approach due to problems with the landing gear and was performing a go-around when the aircraft crashed.

There are reportedly survivors who were taken to local hospitals.

A new video from JustPlanes:

Skardu located at an altitude of close to 8000 feet is surrounded by high mountains making it a complicated approach to be flown only by Captain who are qualified for the airport and only in good visual weather and during daylight hours only.

Pakistan International is the only airline to operate into this airport with service to Islamabad which is the roundtrip flight JustPlanes filmed on the Boeing 737-300.

In 2012 a Just Planes team spent a week in Pakistan to capture the aircraft and some of the routes operated by PIA. The mission here was to give viewers a look at aviation and flight operations in the country. We’re happy to welcome Pakistan International Airlines, the 273rd airline in our seriews! You will be treated to flights on the older classic generation 737 and 747 to the newer generation 777 with few presentations but lots of visuals.

Highlights of the program include the ATR 42 flight to Gilgit, a hub for mountaineering expeditions in Northern Pakistan. Gilgit has a short runway (1600m) located at the edge of a slope. Skardu has a longer runway but at an altitude of over 8000 feet and surrounded by mountains the final approach is very complicated as you enter into the valley with sharp turns and obstacles on both sides. Our flight from Islamabad and back operates on the Boeing 737 classic 300 version. Last but not least is a chance to fly one of the last passenger 747 classic aircraft and one of the last cockpits manned by a Flight Engineer. Only 81 -300s were built with just about none left in passenger service today!

With a short runway located at the end of a slope and high mountains surrounding it Gilgit is considered an extreme airport.

PIA – Pakistan International Airlines has once again refreshed its brand.

All images by PIA.

PIA-Pakistan International Airlines’ flight PK661 from Chitral to Islamabad, Pakistan with 47 crew members and passengers on board has crashed approximately 25 miles north of Islamabad on December 7, 2016. The flight was operated with the pictured ATR 42-500 AP-BHO (msn 663). The airframe was delivered new to PIA on May 15, 2007. 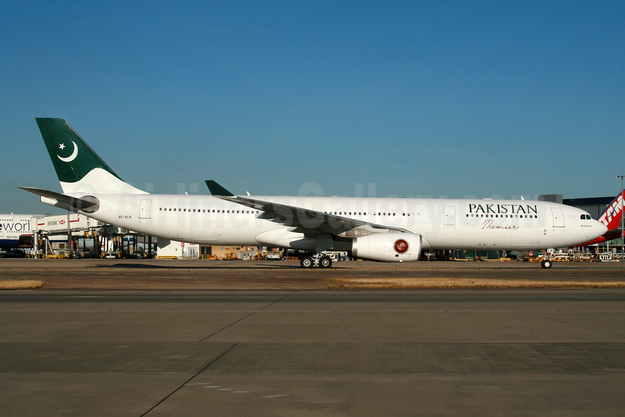 The airline is banking on this new level of service as a pathway to profitability.

PIA is planning to wet lease up to four SriLankan Airbus A330s.

PIA and SriLankan Airlines will increase their cooperation of services and code sharing flights.

PIA-Pakistan International Airlines (Karachi) is planning to retire its last Boeing 747 (ex-Cathay Pacific Boeing 747-367 AP-BFY, msn 23920) within a month according to a report by Business Recorder. The report quotes PIA Chairman Nasser Jaffer in a recent interview with BR Research.

AP-BFY is currently being used on the high-density Hajj charters to Saudi Arabia. The last Jumbo, soon out of time, will be replaced by two wet-leased Boeing 767s according to the report.

Pakistan International Airlines is celebrating its 60th Anniversary in 2015.

Below Copyright Photo: Jacques Guillem/AirlinersGallery.com. Boeing 747-240B AP-BAT (msn 22077) taxies at Orly Airport in Paris in the original 1976 livery.

PIA-Pakistan International Airlines (Karachi) may be headed towards a split-up or sell off to a Gulf carrier according to this report by Reuters of India. Mohammad Zubair, Pakistan’s privatization czar, told Reuters its financial advisers are now in talks with several airlines about taking over the cash-strapped national carrier. The government wants to sell off the carrier in the next 18 months and also intends to split the airline into two companies. Political opposition will be intense in Pakistan concerning the possible sale according the interview.

According to the report, 10 PIA aircraft are currently grounded due to a lack of spare parts!

PIA-Pakistan International Airlines (Karachi) retired its last two Boeing 737-300s (AP-BCD and AP-BCF) on June 17 according to The History of PIA.

Karachi’ Jinnah International Airport came under attack overnight from armed gunmen who were intent on hijacking an aircraft. The attack has been stopped and no aircraft were hijacked.

According to CNN, “the Taliban-claimed attack began on the country’s largest airport at Karachi, Pakistan on Sunday night (June 28), which left 28 dead — including 10 attackers — and 24 injured”.

According to CNN, “the gunmen targeted Terminal 1, the old terminal that had fallen out of regular use. This terminal is only ever used for people flying to and from pilgrimages, for private flights, or sometimes government flights.”

According to Reuters, “The main goal of this attack was to damage the government, including by hijacking planes and destroying state installations,” said Shahidullah Shahid, a Taliban spokesman.

Parts of the airport terminal were on fire.

According to Reuters, “heavy smoke billowed into the sky well into Monday when officials announced the siege was over and that the airport would resume operations at 4 p.m. (1600) (local time) Monday (June 9).”

Jinnah International Airport (IATA: KHI, ICAO: OPKC) is Pakistan’s largest international and domestic airport. Located in Karachi, the largest city and capital of the Sindh province, it is named after Muhammad Ali Jinnah, the founder of Pakistan according to Wikipedia.