Flights between Riga and Dubai are operated by the Airbus A220-300aircraft.

airBaltic has announced that by summer 2022 it expects to recruit 320 additional crew – 120 pilots and 200 cabin crew members. airBaltic group plans to primarily rehire its former pilots who had to be released due to the pandemic and airBaltic Pilot Academy graduates.

Martin Gauss, Chief Executive Officer of airBaltic: “We are pleased to see a growing demand for travel and have launched various new destinations this year. In line with an increasing vaccination coverage worldwide and eased travel restrictions, we are ready to scale our flight operations again. That is why we have come to a decision to rehire our former employees and add new team members to our crew for the next summer season.”

“In 2022, we also plan to receive eight additional brand new Airbus A220-300 aircraft. By hiring additional flight crew now, we will continue our preparations for performing flights with a fleet of 40 aircraft which we expect to have by the end of 2022,” Martin Gauss added.

In addition to pilots, the airline will be welcoming also experienced cabin crew members, as well as candidates with no prior experience in aviation. The rehiring process will start this autumn and will proceed in stages until the beginning of summer 2022. Overall, airBaltic currently employs 1366 people, including 200 pilots and 342 cabin crew.

airBaltic has announced that by connecting Baltic region with almost 90 routes across Europe and beyond, the airline has managed to surpass the number of routes offered during the same period in 2019.

The safety and health of our passengers is airBaltic’s top priority. airBaltic has introduced strong health measures and the flight operations follow the recommendations issued by authorities.

airBaltic asks its passengers to strictly follow all of the rules and regulations issued by the relevant authorities. Passengers are strongly suggested to check the travel regulations and airport restrictions on the official websites or with local embassies before travelling. Regulations are changing rapidly and vary per country, therefore passengers are asked to always make sure they have the latest information to have a smooth journey.

Yesterday airBaltic crew visited @DublinAirport together with @Airbus to represent A220-300 aircraft. We are proud to showcase this state-of-the-art aircraft to visitors being the largest operator of this type. pic.twitter.com/APfzUy7Vf0

Nearly five years ago we were the launch operator of @Airbus A220-300, and until today we've grown into the largest A220-300 operator in the world. Learn more of this success story shared by @airBaltic President & CEO @Gaussm. pic.twitter.com/NpQrjEQLyl

*Lowest fare (one way), including taxes, fees and service charges, on www.airBaltic.com, subject to availability

Flights between Riga and Tenerife are operated by the Airbus A220-300 aircraft.

airbaltic has made this announcement:

As a result of the Coronavirus crisis, revenue and the number of passengers carried by the Latvian airline airBaltic has significantly decreased, and according to airBaltic’s unaudited consolidated financial results for the first six months of 2021, the group suffered loss of EUR 61.5 million.

Martin Gauss, Chief Executive Officer of airBaltic: “Even though our revenue in the first six months of 2021 has further decreased, this summer has seen more promise, as we managed to carry a larger number of passengers than in summer months of 2020 and reduce our net loss three times compared to the six months of 2020.”

It has been an honor to operate the Baltic country flag motive fleet for already two years 🇱🇻 🇱🇹 🇪🇪 It was first revealed in the 30th anniversary of the Baltic Way and it continues to carry the Baltic unity in the skies! pic.twitter.com/0BHMBGFhue

“With the significant cost reduction carried out in 2020 and focusing only on the Airbus A220-300, we are now in a much better position for the future return to normal. airBaltic’s core vision for the future remains the same – to be the number one carrier in the Baltics, providing the best connectivity to and from the region,” Martin Gauss added.

During the first six months of 2021, the revenue of the group reached EUR 50.0 million or 40% less than during the same period last year. The number of passengers carried, and flights performed by the airline decreased by 59% and 51% respectively.

airbaltic made this announcement:

To compensate the losses caused by the ongoing Covid-19 pandemic and to support overcoming the economic crisis, the Cabinet of Ministers of the Republic of Latvia, as the majority shareholder of the Latvian airline airBaltic, has today, on August 17, approved the investment of EUR 90 million into the equity of airBaltic. It is now subject to the approval of the European Commission.

The investment is planned to be returned to the Latvian state in form of proceeds from selling shares during a planned initial public offering of airBaltic in the future.

When the pandemic started in 2020, the company performed a significant cost reduction program and preserved around 1000 employees which were required to maintain the operation of the airline. The equity received in 2020 has been used responsibly to maintain the company’s operations and cover expenses that could not have been avoided due to the Covid-19 pandemic.

airBaltic is a strategic facilitator of the Latvian economy and is responsible for more than 2.5% of the Latvian GDP. Due to the Covid-19 pandemic the number of passengers carried by airBaltic decreased by 73% in 2020, and significantly influenced company’s operations. To support the local economy, Latvian government provided and continues to provide aid to all industries heavily affected by the crisis, including airBaltic. 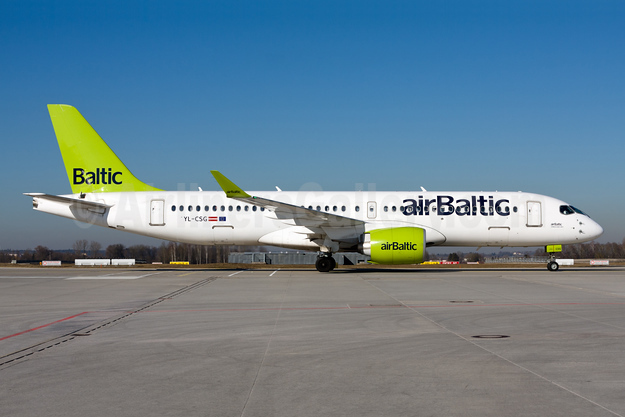 In addition, as of July 2 airBaltic also connects Riga and Edinburgh twice a week.

Flights between Riga and Trondheim, Riga and Bergen, and Riga and Kos are operated by the Airbus A220-300 aircraft.

airBaltic has announced that starting on June 12 it will perform weekly summer seasonal flights between Riga and Greek island Corfu. The new route will be performed in cooperation with Mouzenidis Travel.

We are happy to announce, that starting from June 12 we will perform weekly summer seasonal flights between Riga and Greek island Corfu. The route will be performed in cooperation with Mouzenidis Travel and will be available for purchase on our website: https://t.co/d7QUmGuZ39 pic.twitter.com/5M5ExNvusH

airBalticasks its passengers to strictly follow all of the rules and regulations issued by the relevant authorities. Passengers are strongly suggested to check the travel regulations and airport restrictions on the official websites or with local embassies before traveling. Regulations are changing rapidly and vary per country, therefore passengers are asked to always make sure they have the latest information to have a smooth journey.