Royal Jordanian Airlines has been stressed financially by the COVID-19 pandemic and travel restrictions.

The flag carrier is seeking $282 million in state aid in two packages of $141 million in 2022 to recover from its losses and to purchase new aircraft.

Royal Jordanian Airlines made this announcement:

The upgrades, which are carried out in coordination with DNATA Jordan, RJ’s catering provider, are the result of RJ’s continuous efforts to further enrich its guests’ experience on board its Crown Class.

The newly introduced appetizer and dessert plates were carefully selected to pair well with the choices of hot meals RJ serves on board and to suit different tastes.

The superior appetizers on Crown Class offer two choices: Arabic mezze and Western hors d’oeuvres. They consist of a variety of meat and seafood choices, including smoked salmon, shrimps, calamari and roast beef, or stuffed vine leaves, tabbouleh, shankleesh and mutabbal. These choices will be changed every two weeks, during different cycles; at the same time, the choices offered to passengers flying onboard RJ from Amman will be different from the choices offered out of Amman.

RJ President/CEO Stefan Pichler stressed RJ’s keenness to continuously improve all guest services, keeping them up to the reputation of this prestigious international company which shows appreciation to its passengers. Part of this endeavor is the meal offer on RJ’s flights, in cooperation with dnata.

He said that the improvements came in response to passengers’ suggestions and desires, expressed to RJ, in order to meet these demands and to make passengers’ travel experience comfortable and enjoyable, just as RJ is known to have been doing.

Pichler called on all guests to provide RJ with their feedback, promising to maintain an open channel of communication between the airline and its customers.

“We listen to our guests and want to receive their feedback, particularly in regard to our onboard services which RJ constantly works on improving,” he said. 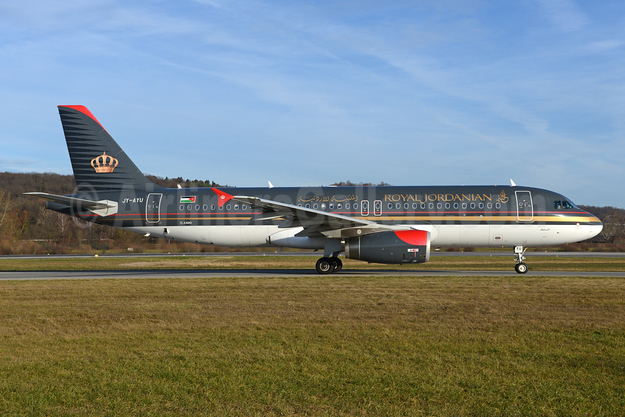 Royal Jordanian Airlines (Amman) will resume the Amman – Copenhagen route on June 3, 2018. The three-times-weekly route will be operated with Airbus A320 Family aircraft according to Airline Route.

The carrier last flew to CPH in February 1990.

Royal Jordanian Airlines (Amman) retired its last Airbus A340-200 from revenue service on November 27, 2014 after the pictured A340-211 JY-AIA (msn 038) completed its flight from Chicago (O’Hare) to Amman per ch-aviation.

Above: Twitter photo by IATA. The arrival was greeted with the traditional water cannon salute.

In other news, RJ announced a new policy for checked luggage, based on the piece concept instead of the weight concept. The new policy will be effective for ticketing on October 15, 2014, for travel as of November 2, 2014 to all RJ destinations.

Checked baggage allowance to all destinations except North America

One piece, with a weight up to 30kg.
The sum of the three dimensions of one piece must not exceed 158cm (62 inches).

One piece with a maximum weight of 10 kg/22 lbs the sum of the 3 dimensions must not exceed 115cm/45 inches, and a carry-on fully-collapsible child stroller/push-chair, or infant carrying basket or infant car seat, which may be carried in the passenger cabin subject to the availability of space.

Royal Jordanian Airlines’ (Amman) first Boeing 787 had its inaugural flight on September 1 from its base at Queen Alia International Airport to London Heathrow, thus starting its regular operations.

Chairman of the Board/President & CEO Nasser Lozi wished the passengers an enjoyable journey on board the Dreamliner’s first flight from Jordan, and expressed RJ’s delight to have in its fleet the 787, an aircraft that has state-of-the-art features and high specifications.

He said the new addition to the fleet is the first of five that will join the RJ fleet during this year as part of the company’s strategic plan to modernize its long-range fleet of aircraft, replacing the currently operating Airbus A340s and A330s.

With this aircraft that was received on August 27, 2014, Royal Jordanian becomes only the second airline in the Middle East to operate the 787.

The passengers flying to London expressed their excitement to fly onboard the Dreamliner, being one of the most advanced airliners. They also valued Royal Jordanian’s keenness to offer passengers superb in-flight services.

The 787 will provide Royal Jordanian with unrivaled fuel efficiency, using 20 per cent less fuel than today’s similarly sized airplanes. RJ chose to configure its Dreamliner to carry 24 passengers in business class and 246 in economy.

Copyright Photo: Bernie Leighton/AirlinersGallery.com. The first, Boeing 787-8 JY-BAA (msn 37983) is pictured being prepared at Paine Field before the hand over.

With this delivery, Royal Jordanian becomes only the second airline in the Middle East to operate the 787.

The airline will configure its Dreamliner to carry 24 passengers in business class and 246 in economy class.

To support Royal Jordanian’s Dreamliners, Boeing is providing a comprehensive suite of support and services through its Commercial Aviation Services business. Royal Jordanian has received flight and maintenance training and will be using Airplane Health Management, a diagnostic and predictive capability that evaluates airplane operations data while airplanes are in flight and notifies ground crews of potential maintenance issues; a Rotable Exchange Program that provides a dedicated pool of high-value, mission-critical parts and manages inventory at a reduced cost; and Maintenance Performance Toolbox, a digital real-time-information tool that enables quick resolution of airplane maintenance issues.

Royal Jordanian currently flies a network of over 50 global destinations and plans to deploy the Dreamliner on services to North American destinations as well as to Asia, Europe and the Middle East.

To date, more than 180 Dreamliners have been delivered to 20 customers worldwide.

Lufthansa Group (Lufthansa) (Frankfurt) is not flying over Iraq through today. The Group issued this statement:

After renewed consultation, the Lufthansa Group has decided effective immediately not to fly over Iraq until and including Sunday. This includes flights to Erbil in northern Iraq for this time period. Normally, Lufthansa flies twice weekly to Erbil and Austrian Airlines operates a daily flight. The company is also in regular and close contact with the responsible security authorities in Iraq regarding flight safety. Based on our own evaluations there is currently no danger in flying over Iraq or for Lufthansa and Austrian Airlines flights to the north Iraq city of Erbil. Nevertheless and as a precautionary measure the Lufthansa Group has decided to avoid Iraqi air space effective immediately and including Sunday. The reason for this is that the background of the decision made by some aviation authorities is not clear yet and needs a comprehensive evaluation. With this step the company carries the growing uncertainty of customers and crew members that results from the different evaluations of aviation officials. Lufthansa regrets the resulting inconvenience for its customers. However, the safety and security of its passengers is the highest priority of the company. The changed flight routes apply to all group airlines. In addition to Lufthansa, this includes Lufthansa Cargo, Austrian Airlines and Swiss. By avoiding Iraqi air space flight times will not significantly increase.

Qantas has closely monitored the issue of flight paths over conflict zones, particularly in light of the MH 17 tragedy, with safety our first priority.

We have no new information that alters our safety assessment of flying over Iraq, especially given the altitudes we maintain over this region.

However, given the various restrictions imposed by different governments in the past 24 hours, including by the United States’ FAA, QANTAS temporarily rerouted its flights within the Middle East to avoid Iraqi airspace. This change will apply until further information becomes available.

The flight path adjustment applies to services between Dubai and London, and is not expected to significantly increase flight times on this route.

We will continue to assess this situation and make any further amends we think are prudent.

In addition, Royal Jordanian suspended all flights to Baghdad for at least 24 hours on security grounds yesterday according to Reuters.