United Airlines promoted the resumption of its flights to Newark Airport with the Statue of Liberty, the iconic symbol of New York. An ultramodern Boeing 787-9 Dreamliner departs the Bavarian capital for the US every Monday, Wednesday, and Friday at 12:30 p.m.

Thorsten Lettnin, Managing Director Sales for Continental Europe and India at United Airlines, remarked: “We are delighted to be resuming our service between Munich and New York/Newark at the beginning of August. Having restarted flights to Washington Dulles International Airport in early July, we are now flying to our two most important hubs on the US East Coast once more. Passenger and staff safety is our top priority at United.”

Bamboo Airways is operating the first nonstop flight connecting Vietnam and the Czech Republic from March 29, 2020.

After the Czech Republic, the Federal Republic of Germany will be the next European market that Bamboo Airways targets in the QI/2020. Accordingly, Bamboo Airways will sign an MoU with Munich Airport, promoting two direct routes connecting Munich – Germany’s third-largest city, with Hanoi Capital and Ho Chi Minh City – Vietnam’s largest city.

These routes will be operated by Boeing 787-9 Dreamliner aircraft.

Lufthansa is now operating the Airbus A380 on the Munich – Shanghai route.

On July 15, 2019 Belavia carried out its first regular flight on the route Minsk-Munich-Minsk.

Flight will be operated by Embraer 175 aircraft with a seating capacity for 76 people. Flight duration will be around 2 hours.

Eurowings made this announcement:

From June 1, 2019: Instead of Terminal 2, departures and arrivals will be handled in Terminal 1 of Munich Airport from now on. Munich’s second-largest airline will be moving into its new location soon. Eurowings passengers benefit from short distances and can use all Eurowings service facilities easily and comfortably in one connected area.

In addition to domestic German flights, Eurowings particularly offers touristic destinations around the Mediterranean Sea. Terminal 1 at Munich Airport is well suited for this point-to-point traffic with its short distances from the short-stay parking zones or car park P1 to the check-in area and gates. Check-in for all departures is in Area A. Passengers can enjoy attractive catering and shopping facilities after passing through the security checkpoint.

For transferring passengers, a free shuttle service is available, which carries them every 10 minutes between the two terminals.

In other news, the first Eurowings-branded Airbus A320 (OO-SNN) arrives in Brussels on May 31 for operation by Brussels Airlines.

Munich Airport has made this announcement:

In time for the start of the summer timetable season, Lufthansa launched a new service from Munich to Osaka on March 31, 2019. The German carrier has decided to extend this route from Frankfurt to Munich. Along with the established flights operated by Lufthansa and All Nippon Airways to Tokyo, Munich Airport is now offering a second Japanese destination for the first time. With three daily connections, Munich Airport now ranks fifth in Europe in terms of flights to and from Japan.

From Europe, Japan’s third-largest city can be reached nonstop only from Amsterdam, Helsinki, London-Heathrow, Paris Charles-de-Gaulle and now Munich. Japan is one of the most important destinations in Asia – as demonstrated by the rising passenger figures. In 2018 a total of 200,000 passengers travelled in each direction between Munich and Japan.

Lufthansa is also adding a daily connection to Bangkok starting in June 2019, complementing the existing service operated by Thai Airways. Moreover, Lufthansa is bumping up the frequency of its flights to Seoul from 6/7 to 7/7. From June onward, Lufthansa will increase its service to Singapore from five flights a week to a daily connection. Passengers can now choose between two daily flights, either with Singapore Airlines or Lufthansa. In the summer of 2019, five airlines will depart 100 times per week to 10 destinations in seven countries in the Far East. This represents a 17 percent increase in the number of flights to that region over the previous year.

Lufthansa on March 17 repositioned the first Airbus A380 (D-AIMB) from Frankfurt to the Munich hub. D-AIMB is the first of five A380s to be stationed at MUC. The airline made the announcement on social media.

She is 120 centimeters tall, with sparkling, round eyes and a pleasant voice: Starting, “Josie Pepper” the robot will be answering questions for passengers in Terminal 2. Whether they need directions to their gate or want to stop at a certain restaurant or shop – Josie Pepper will look them in the eyes and give them a prompt answer.

With the rollout of Josie Pepper, Munich Airport and Lufthansa are breaking new ground: It is the first-ever test of a humanoid robot equipped with artificial intelligence at a German airport. For the next few weeks, Josie Pepper will welcome travelers to the non-public area of Terminal 2, which is jointly operated by Munich Airport and Lufthansa. In her initial deployment, Josie Pepper, who speaks English, will await passengers at the top of the ramp leading to the shuttle connecting the main terminal to the satellite building. This test phase will be used to show whether Josie Pepper is accepted by passengers.

Josie Pepper’s “brain” contains a high-performance processor with a WLAN internet access. This creates a connection to a cloud service where speech is processed, interpreted and linked to the airport data. What sets the system apart: When this robot type speaks, it does not just deliver pre-defined texts. With its ability to learn, it answers each question individually. Just like a “real” brain, the system gets steadily better at combining questions with the relevant information to provide more precise replies.

IBM Watson Internet of Things (IoT) cloud-based, artificial intelligence technologies are behind Josie Pepper’s capabilities. Pepper was developed by the French company SoftBank Robotics. The lady robot was given the name “Josie” by the staff of Munich Airport and Lufthansa when she arrived at the airport.

“Happy Birthday!  25 Years Munich Airport.” This is the branded message a Lufthansa Airbus will be carrying throughout Europe. The plane can also be seen on Saturday, May 20 during Family Day – the airport’s big birthday celebration suitable for the whole family. The message will stay on the Airbus A320-214 with the registration D-AIUQ (msn 6947) until fall. “We have chosen this unusual birthday greeting because we are celebrating a shared 25-year success story. The growth of Lufthansa in Munich is closely connected with that of the airport. Such a close partnership is unique worldwide,” says Wilken Bormann, CEO of Hub Munich.

The partnership between Lufthansa and Munich Airport goes back to the very beginning. On May 17, 1992 a Lufthansa Boeing 737 was the last aircraft to depart from the airport in Riem, shortly before 11:00 PM. The following morning, two Lufthansa planes, named “Erding” and “Freising”, landed at the same time on the south and north runways of Munich Airport. The first plane to takeoff at the new airport also bore the Lufthansa logo: on the next day, at 5:59 AM, a Boeing 747 took off on an Alpine scenic flight carrying honored guests.

The first steps in developing the future Lufthansa hub in Munich were taken as early as in1995 with the deployment of two long-haul Airbus A340 aircraft. Three years later, the Lufthansa management board approved the airline’s involvement in what would eventually become Terminal 2. For the first time, an airline and an airport were planning, financing, and building a terminal together. The terminal building opened in 2003, fully tailoring to the needs of transfer passengers. Terminal 2 laid the foundation for more rapid development at the Munich Hub. Just one year after opening, it hosted its ten millionth passenger. In 2010, the supervisory boards of Flughafen München GmbH (FMG) and Lufthansa approved an expansion in the form of a satellite building, which opened in April 2016. Since then, Terminal 2 has the capacity to handle 36 million passengers. Another milestone followed in February 2017 – as Lufthansa and Munich Airport welcomed the first A350. In the future, 15 of these most modern and environmentally friendly long-haul aircraft will be based at the Munich Lufthansa hub. Shortly afterwards, the next joint success followed: Munich Airport’s Terminal 2 was named the best terminal in the world at the London Skytrax Institute’s 2017 World Airport Awards. 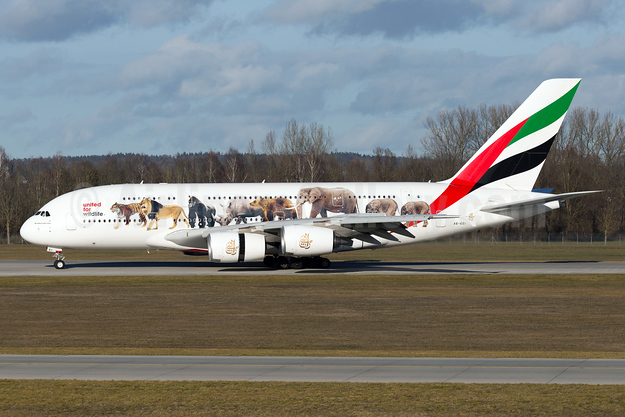 Emirates (Dubai) is planning to introduce the Airbus A380 on the daily Dubai – Washington (Dulles) route starting on March 27, replacing the current Boeing 777-300 ER per Airline Route.

The second Los Angeles flight will be operated with an Emirates’ Airbus A380-800 aircraft in a 3-class configuration with 14 private suites in First class, 76 seats in Business class and 401 seats in Economy class.