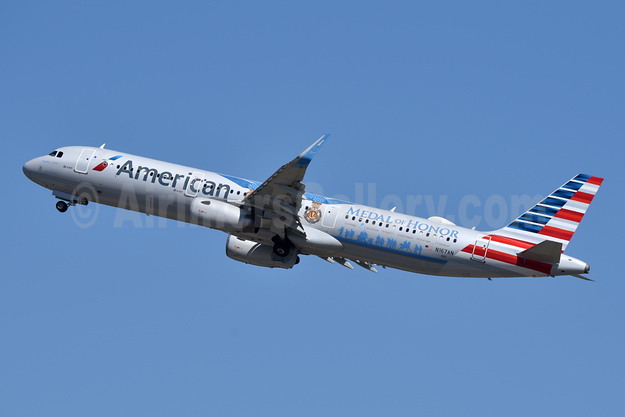 American Airlines joined elected officials, team members and volunteers in Washington, D.C., this week to celebrate a historic milestone for the Honor Flight Network, a nonprofit organization dedicated to providing veterans with once-in-a-lifetime trips to visit the nation’s capital and the memorials erected in honor of all those who have worn the U.S. military uniform. To commemorate the occasion, American also announced a donation of 15 million AAdvantage® miles to support and sustain the Honor Flight Network’s ongoing mission.

A milestone flight in honor of our heroes

On May 2, Flagship Valor — American’s newly dedicated Airbus A321 aircraft, which serves as a flying tribute to recipients of the Medal of Honor — departed from Phoenix Sky Harbor Airport with the 250,000th participant in the Honor Flight program, two Medal of Honor recipients and more than a hundred World War II, Korean War and Vietnam War veterans. The 250,000th veteran to participate in the Honor Flight program arrives on Flagship Valor to a hero’s welcome at BWI.

The veterans were accompanied throughout their journey by Honor Flight guardians and other volunteers, including American team members and U.S. Sen. Kyrsten Sinema from Arizona, who helped pass out refreshments and care for those on board while in flight.

“I’m honored to participate in this week’s hero’s welcome celebrating and thanking Arizona veterans for their service and sacrifice to our state and country. I’m grateful for Honor Flight Network’s and American’s efforts in honoring veterans and bringing them to our nation’s capital,” Sinema said. Honor Flight participants tour the monuments and memorials built in honor of their service and sacrifice. Hundreds attend the May 3 event at the World War II Memorial to commemorate the Honor Flight Network’s milestone achievement.

To help the Honor Flight Network achieve its mission, American announced it will donate 15 million AAdvantage miles over three years to support and expand the reach of the program.

“The American Airlines team takes great pride in serving veterans on the many Honor Flights operated annually to our nation’s capital and in caring for all those who have and continue to serve in the U.S. military,” said Nate Gatten, Chief Government Affairs Officer for American. “It is our hope that such a contribution can help the Honor Flight Network fulfill its mission of celebrating America’s veterans, ensuring each experience the honor, gratitude and support they deserve.”

Throughout May, American is celebrating the service and sacrifice of U.S. service members and their families through one-of-a-kind experiences across the country. Later this week, American will host Salute to the Troops in partnership with the USO — flying 20 service members battling cancer from Walter Reed Army Hospital in Bethesda, Maryland, to Walt Disney World with their families for a weekend of memories and fun. Then, in support of Seats for Sailors and Armed Forces Day, American will treat sailors from Naval Medical Center San Diego to a VIP experience with the Texas Rangers. American will also sponsor a similar experience at Rangers Stadium for Gold Star families from North Texas in commemoration of Memorial Day.

American Airlines on March 24 at its Dallas-Fort Worth hub introduced a special “Flagship Valor” livery saluting Medal of Honor recipients.

The aircraft depicts major military conflicts and the six characteristics that embody the Medal of Honor and those who have received it.

On board, customers can scan QR codes for access to information about the Medal of Honor and its extraordinary recipients, serving as a teaching tool to pass on these remarkable stories for generations to come. Its first official mission will transport Medal of Honor recipients on an honor flight from Dallas-Fort Worth (DFW) to Washington D.C. (DCA) today.

Flagship Valor was unveiled Thursday evening ahead of today’s groundbreaking of the National Medal of Honor Museum in Arlington, Texas. Expected to open in 2024, the new museum will create a permanent home for the incredible stories of our nation’s greatest heroes. Learn more about our partnership with the National Medal of Honor Museum and the important mission of the museum.

Watch as Flagship Valor comes to life at American’s Maintenance base at Tech Ops – Tulsa and as the airline welcomes special guests to Dallas-Fort Worth for the big reveal.