“Notwithstanding the competition at Ben Gurion Airport, the Company succeeded to increase and improve its market share by 2%, with the number of passengers increasing by 6.5%.

“The Company’s Acquisition Program progresses as planned. Thus far, the Company has received 12 new 787-9 aircraft, and by the end of the first quarter of 2020, 4 additional 787-8 aircraft are expected to arrive, thereby the Program will be completed.

“We completed the major part of the Aircraft Interior Improvement to 737-800NG narrow-body aircraft fleet.

“Out aircraft fleet has become younger and, for the first time, the aircraft average age falls below 10 years. Our product improves and we witness constant increase in our customers’ satisfaction.

“As part of our growth strategy, we enhance existing activities and continue to expand our network of routes by launching routes to new destinations. Thus far in 2019, the Company has launched the routes to Niece, San Francisco, Manchester, and Las Vegas, and in 2020 the Company is expected to launch the routes to Chicago, Tokyo, Dublin and Dusseldorf.

“In July 2019, we launched the new booking engine for the Matmid Frequent Flyer Club members and improved the value offer to the club members.

“In September 2019, the Company entered into a triangle agreement with CAL, Diners and a new strategic partner, MasterCard, in connection with the branded credit card, Fly Card. The new card to be issued is a combined Diners and MasterCard credit card that has a global coverage and offers expanded options to redeem points in the aviation and non-aviation world. The Fly Card credit card and the Matmid Frequent Flyer Club constitute one of the most important growth engines of the Company.

“I would like to thank our customers for their trust in EL AL. I am convinced that EL AL will continue to provide its customers with quality service, maximum comfort, technological innovation and advanced airplanes. We are doing the utmost to allow the customer to choose EL AL over and over again.

“I wish to express special appreciation to EL AL people in Israel and worldwide, who work with determination and dedication and make an extra effort for the Company’s success.”

“The Company recorded a decrease in fuel expenses for the reported quarter, as a result of the decrease in jet fuel market prices and the amount of fuel consumed by the Company’s aircraft, notwithstanding the 8% growth in operations, mainly due to the operation of the 787-9 aircraft, which are more efficient in fuel consumption.

“The company has signed an agreement with a JOLCO structure to finance the first 787-8 aircraft, expected to arrive this weekend. The USD 125 million financing includes a USD 106 million loan from a foreign bank for a 12-year period and an additional USD 19 million in Japanese Yen, to be provided by a Japanese company. The balance of the debt will be repaid after ten years at a pre-agreed amount of USD 45 million.”

Viasat made this announcement:

El Al Israel Airlines, the national air carrier of Israel, and Viasat Inc., a global communications company, today announced they expanded their successful relationship, adding the Boeing 777 wide body fleet to the mix of EL AL aircraft with Viasat’s equipment for high-speed in-flight connectivity (IFC). In addition to the Boeing 777 fleet, Viasat equipment currently powers the connectivity experience across EL AL’s Boeing 787 Dreamliner, Boeing 737-900 and part of Boeing 737-800 aircraft. EL AL plans to have all widebody aircraft equipped with Viasat’s latest generation IFC solution and all narrow-body fleet equipped with Viasat’s in-flight entertainment and connectivity (IFEC) offering. El Al expects to have the majority of its fleet connected with the Viasat service by the end of 2020.

The Viasat in-flight Wi-Fi service offers an at-home or office experience in the sky, keeping flight crews connected for enhanced passenger service and enabling passengers using smartphones, tablets or laptop computers the ability to browse websites, connect to email and instant messaging, use apps and social networks and to stream music and/or films when in-flight. 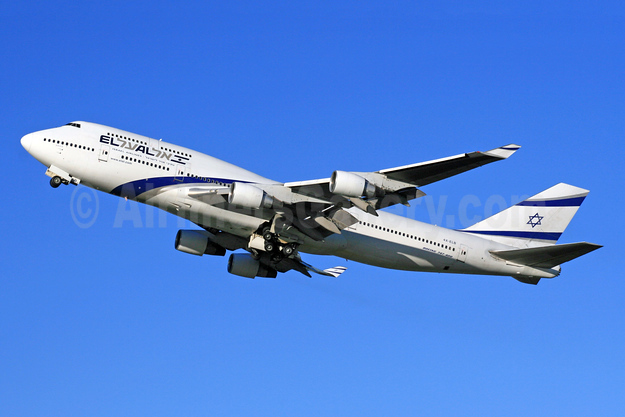 El Al Israel Airlines has confirmed the last Boeing 747 revenue passenger flight for tomorrow (November 3) from Rome to Tel Aviv with this announcement:

A historic morning at Ben Gurion Airport! EL AL management raised a toast with members of the Matmid Frequent Flyer Club who joined us for the very last two commercial flights of the 747, also known as “The Queen of the Skies.” 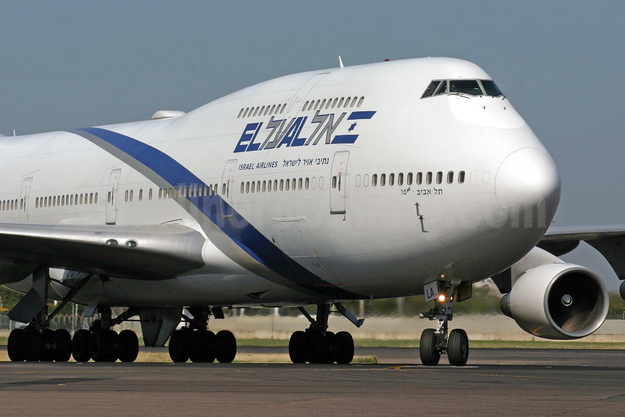 EL AL invites you to follow the last commercial flight of the 747 jumbo aircraft which will depart from Rome this Sunday at 4 am EST and land in Tel Aviv.

In honor of this noteworthy event, the 747 aircraft will operate on a one-time historic flight path and create a “sky painting” of a Boeing 747 that will be broadcast live worldwide in cooperation with Flightradar24.

The aircraft will begin to create the “painting” about two hours after takeoff when flying above southern Cyprus. The Boeing 747-400 fleet has been replaced by the new EL AL 787 Dreamliner aircraft, which are being utilized on most U.S. Israel nonstop routes.

After 48 years, during which EL AL has flown many 747 models, the fleet’s activity has come to an end. EL AL is bidding farewell to the Boeing 747 Jumbo fleet, “Queen of the Sky” marking the end of a historic chapter in Israel aviation.

EL AL invites you to follow the last commercial flight of its 747 aircraft: Flight LY1747 from Rome to Tel Aviv.

The flight will depart on Sunday November 3, 2019 at 10am local time (11am Israel time). In honor of the event it will operate on a one-time historic flight path.

This flight path will create a “sky painting” of a Boeing 747 that will be broadcast live throughout the world in cooperation with Flightradar24. 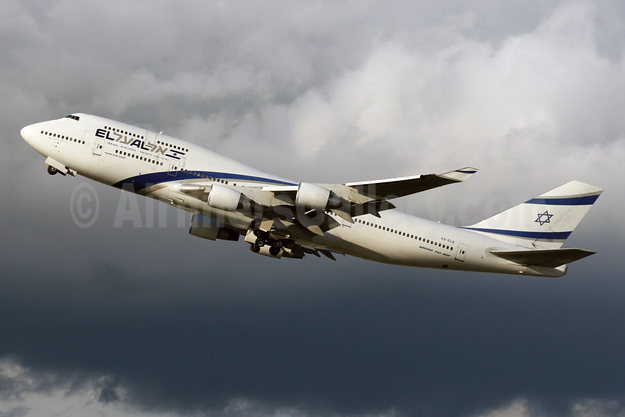 According to Airline Route, the carrier is now scheduling its last Boeing 747 revenue flight, charter flight LY 1747 between Rome (Fiumicino) and Tel Aviv on November 3, 2019.

“During the second quarter of 2019, the company recorded a 7% increase in revenues, amounting to USD 584 million, mainly due to impact of Passover, which fell this year in the second quarter. In addition, the Company recorded an improvement in the key operational indicators, and all this alongside the struggle with the challenges and high competition at Ben Gurion Airport.

We witness a constant growth in our customers’ satisfaction from these airplanes. We have removed, as planned, the 676 aircraft fleet and are currently gradually removing the 747 airplanes. At the same time, we have started implementing a program to improve aircraft interiors of existing fleets, which also progresses as scheduled. Accordingly, out aircraft fleet becomes younger and our product is better.

As part of our growth strategy, we enhance existing activities and expand our network of routes by launching routes to new destinations and adding flights to existing ones. In the last quarter, we launched the routes to San Francisco, Las Vegas and Manchester, in addition to the route to Niece, which was launched in the first quarter of 2019. Further to the announcement of launching the routes to Tokyo and Chicago, which are expected to operate from March 2020, the Company announces today the launch of routes to Dublin and Dusseldorf, which are expected to operate from summer 2020.

During the second quarter of 2019, we commenced, as planned, to operate flights to all the Company’s destinations in the East and South Africa under a new model, which provides the customer with the possibility of choosing between three different types of flight product packages – Light, Classic and Flex – each customer according to his needs.

I would like to thank our customers for the trust in El Al. We are doing everything possible so that customers will choose us over and over again. Special appreciation is extended to EL AL employees, who share this special effort.”

“The increase in the Company’s revenues and the decrease in its expenses improved the profit before tax for the reported quarter by approximately USD 23 million, compared to the second quarter of 2018. All these, despite the implementation of IFRS 16 (Leases), which reduced the improvement in the Company’s results for the quarter by about USD 5 million.  The Company recorded a decrease of approximately USD 8.5 million in fuel expenses for the reported quarter due to the drop in jet fuel prices and a decline in the quantity consumed, despite growth in operations as a result of operating the new 787-9 ‘Dreamliner’ aircraft, which are more efficient in fuel consumption.

In the second quarter of 2019, the Company received financing of approximately USD 145 millionfrom Japanese financial institutions, for the purpose of acquiring another 787-9 Dreamliner, which was received by the Company in June. So far, 11 new 787-9 Dreamliners have joined the Company’s fleet, of which 4 are owned and 7 are leased”.

Air Italy has made this announcement:

At the same time, Finnair’s customers have now the opportunity to fly to Air Italy’s African destinations, traveling from Finland via Milan Malpensa, and connect seamlessly to Dakar, Lagos, Accra, Sharm El-Sheikh and Cairo.

Moreover, from Tel Aviv, El Al’s passengers can also connect to Air Italy’s domestic network from Malpensa to the key cities and towns of central and southern Italy such as Rome, Naples, Palermo, Catania, Lamezia Terme, Cagliari and Olbia.

El Al Israel Airlines has ended its in-house Boeing 747-400F freighter operations. Instead the company is farming out the freighter work to sub-contractors ASL Airlines and AirBridgeCargo.