Ethiopian Airlines  has announced that it has finalized all preparations to launch a direct thrice weekly flight to Istanbul, Turkey as of April 1, 2019.

The flight to Istanbul will be dispatched as per the schedule below:

Istanbul marks Ethiopian’s 19th destination in Europe. Ethiopian is currently serving 119 international destinations across five continents with young aircraft with average fleet age of five years. It will also bring the number of passenger flights the airline operates to European cities to 57 per week.

The New Istanbul Airport (ISL) is now due to open on March 3, 2019, pending any last-minute issues. The opening has been delayed twice.

Once fully operational, the IST airport code will be transferred to the new airport (it is currently using ISL) from the current Ataturk Airport.

Turkish Airlines has also announced it will move additional flights to the new airport before the full open. It is currently operating at both airport.

All photos by the airport authority.

Turkish Airlines welcomes a new era of Turkish Aviation with the opening of Istanbul New Airport. The world’s largest international hub will be home to Turkey’s national flag carrier and establishes Istanbul’s place as the centre of the globe for aviation and travel. The smart airport, thanks to its strategic location at the crossroads of east and west, has great potential for Turkish Airlines and the global aviation industry and will welcome 200 million passengers per year upon final completion.

To coincide with the 95th anniversary of the founding of the Republic of Turkey, the eagerly-awaited Istanbul New Airport was named “Istanbul Airport” at the opening ceremony yesterday, officially opened by President of the Republic of Turkey, Recep Tayyip Erdoğan. Passengers on the first Turkish Airlines flights to the new airport that specially operated yesterday for the opening ceremony, received souvenir tickets. The opening of the new aviation hub, combined with the dynamism and energy of Turkish Airlines, will usher in a new era for the carrier.  Following the official opening of Istanbul Airport on 29th October 2018, Turkish Airlines is operating a limited number of domestic and international routes from the new airport, while all operations and existing flight schedule will run as usual from Istanbul Atatürk Airport. New, additional flights will be operated from Istanbul New Airport to Ankara, Antalya, Izmir, Azerbaijan (Baku) and TRNC (Ercan) until 30th December.  Pursuant to existing planning, on 31st December, all operations will move from Istanbul Atatürk Airport, after which, all flights will operate from Istanbul New Airport.

As the airline that flies to more countries than any other, Turkish Airlines will be able to increase its network extension capacity and opportunities for new routes and timings with more slots available, allowing growth for both passenger and cargo transportation.  Passengers will benefit from a redefined travel experience throughout a superbly laid out ‘built from scratch’ terminal using the latest technologies and innovations.

The megaproject will be launched in four phases with the final phase set to be complete in 2028. In all, the complex will occupy an area of 76.5 km2, boasting six runways, four terminals and 233 aircraft parking positions, with the capacity to serve up to 200 million passengers a year with 500+ check in desks and 225,000 employees. Upon completion of the final phase, the largest international flight hub will incorporate offices, residences, hotels, a health center, culture and art buildings, a shopping mall, designer outlets, an EXPO convention centre, and meeting and training facilities on site.

All photos by Turkish Airlines.

Oman Air, the national carrier of the sultanate of Oman, commences its new daily flight from Muscat to the Turkish city of Istanbul on June 1, 2018. The inaugural flight WY 163 departs Muscat International Airport at 20.10 hrs. after a cake-cutting ceremony at Oman Air’s exclusive First and Business class check-in lounge. Oman Air delegation led by their Chief Commercial Officer Paul Starrs will be received by key officials at the Istanbul Ataturk International Airport.

Oman Air will host a gala Iftar dinner and a press conference at the Kempinski hotel in Istanbul, which will see important dignitaries, media members and travel trade guests attend the events.

The new route between Oman and Turkey will strengthen the existing vibrant bilateral relations between the two brotherly countries. With the opening of this route, Oman Air’s guests will be able to explore one of the world’s most thriving cities. Intertwining both ancient and modern cultures, the largest city in Turkey, Istanbul is the heart of the country’s economic, cultural, and historical roots, with much to offer Oman Air guests travelling to this beautiful destination.

Oman Air is currently undergoing an exciting fleet and network expansion programme, which will see the airline operate up to 66 aircraft to 60 destinations by 2022. The airline continues to be recognised for its award winning on board experience; winning a raft of industry awards to add to its growing collection.

From TRT World. It’s expected to be the world’s busiest airport, and it’s due to open in Istanbul in October. It will be the city’s third airport – and is being built at a cost of more than twelve and a half billion dollars. Our correspondent Joseph Hayat reports. 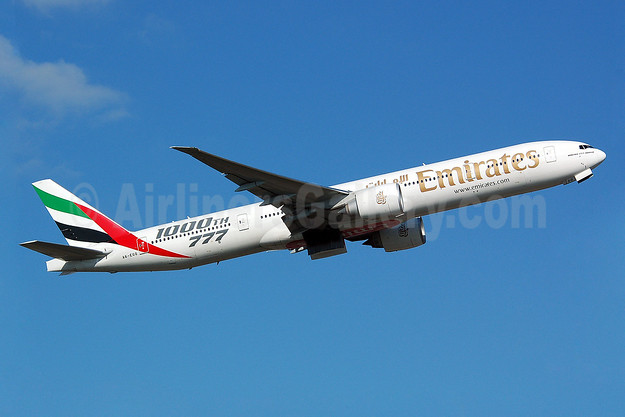 Emirates (Dubai) has announced the resumption of flights between Dubai and Istanbul’s Sabiha Gokcen Airport, starting on June 8, 2018. The resumption of services on the route will allow customers two destination options when travelling Emirates to Istanbul.

The flight will be operated five times a week by an Emirates Boeing 777-300ER (above) in a three class cabin configuration, with eight private suites in First Class, 42 lie-flat seats in Business Class and 310 spacious seats in Economy Class. Together with Emirates’ other service to Istanbul, the airline will offer 16 flights and over 6500 seats per week, catering to both tourism and business traffic.

The aircraft allows for an increase in cargo capacity to Istanbul, with a weekly total of 100 tonnes and makes Emirates the only airline operating a scheduled service with a wide-body aircraft at Sabiha Gokcen Airport.

Emirates flight EK119 will depart Dubai at 1000 hrs and arrive in Istanbul at 1345 hrs. The return flight EK120 will leave Istanbul at 1535 hrs, and arrive in Dubai at 2100 hrs. The new timing allows customers from Istanbul to seamlessly connect to Emirates’ flights at Dubai International Airport to popular destinations like Bangkok, Shanghai, Seoul, and cities across Australia.

Travellers can access Istanbul City with ease from Sabiha Gocken, and from surrounding provinces to the airport. The development of the Osman Gazi Bridge offers residents from north and west provinces a commute time of under an hour to Sabiha Gocken Airport, and those looking to travel to and from Istanbul’s European side can use the scheduled bus service between the Sabiha Gokcen and Taksim Square, an approximate 45 minutes journey.

The flight was welcomed by the traditional water canon salute (above) by the well-organized reception inside the airport which was attended by the CEO of the airport, CEO of the ground handling company, the CEO and staff of the Turkish GSA, Merkur, and representative of the travel and tourism companies in Turkey. Fly Baghdad delegation included the CEO, Sales manager, and Flight and cabin crew. And the flight was fully sold from both ways.

Fly Baghdad started their Istanbul route with three flights a week. The route will become a daily flight within two months from the start of operation. Passengers can book their tickets by visiting the airlines website www.flybaghdad.net in addition to booking through the call center and travel agents in Iraq and the destination countries.

Fly Baghdad network is expected to grow in the next three months to include destinations like Amman, Beirut, Dubai, Cairo, in addition to airports in Europe and the Indian subcontinent.

Libyan Wings (Tripoli), despite the on-going civil strife in Libya, launched scheduled passenger operations this today (September 22) with a morning flight from Tripoli’s Mitiga Airport to Istanbul. The inaugural flight was delayed from yesterday.

The new airline is owned by Libyan businessman Wissam Al-Masri according to the Libya Herald.

Turkish Airlines (Istanbul) has announced it will extend the current Istanbul (Ataturk) – Johannesburg route to Durban this fall. Durban will become the third destination for the carrier in South Africa.

Turkish currently has the fourth largest flight network with 276 destinations in 110 countries.

Copyright Photo: SPA/AirlinersGallery.com. Airbus A330-303 TC-JNS (msn 1458) climbs away from the runway at London’s Heathrow Airport.