Air Transat on December 18 inaugurated a service between Vancouver and Costa Rica, consisting of a direct flight to San José and a second flight segment to Liberia. The route is available twice weekly, on Wednesdays and Saturdays, until April 18.

After its initial stop in San José, the aircraft landed at Daniel-Oduber-Quirós International Airport in Liberia to a traditional water cannon salute. Disembarking passengers watched a ribbon-cutting celebration and enjoyed snacks in the company of César Jaramillo, CEO of the airport.

Air Lease Corporation (ALC) has announced lease agreements with Air Transat for six Airbus A321-200 aircraft.  The aircraft will deliver to the airline beginning this month through December 2019.

Air Transat has unveiled its summer program for 2020, with more destinations offered from Montreal and Toronto.

The airline will operate 150 flights a week to 27 European cities and increase its offering to the South and the United States. Numerous domestic and connecting flights will also benefit Canadian travellers across the country. New summer destinations include Copenhagen, Denmark; Faro, Portugal; and San Diego and New Orleans in the United States.

“The arrival of our Airbus A321neoLRs marks the dawn of a new era for us,” says Annick Guérard, Chief Operating Officer of Transat. “Along with our wide-body fleet, these aircraft help us become more flexible by increasing the options to reach Europe from major Canadian airports. Travellers win big, with more holiday choices and increased frequencies.”

Given its success in 2019, TGV AIR will be back in the summer of 2020. In partnership with SNCF, France’s national rail service, Air Transat offers its clients a one-stop shop allowing them to combine a flight to Paris with rail travel from Paris-Charles de Gaulle airport. Travellers can thus access 18 French cities and Brussels, Belgium. “Our priority is to give tourists choices,” says Guérard. “Many of our customers took advantage of this service this year.”

In the summer of 2020, Air Transat will operate 17 flights a week to Paris from Montreal, three more than in 2019, and will once again offer an exceptional offering to Bordeaux, Lyon, Marseille, Nantes, Toulouse and Basel-Mulhouse.

Most of these French destinations will also be available from Quebec City, Toronto, Calgary and Vancouver, thanks to connecting flights. In total, Air Transat will have direct flights to 20 European cities from Montreal. It will also fly to Paris from Toronto five times a week.

Air Transat will operate 24 flights a week to the United Kingdom from Toronto, five more than in 2019, including two daily flights to London in high season. The airline will have five flights to Manchester, England, and five to Glasgow, Scotland, each week. Most of these destinations will be available to travellers flying from Montreal, Calgary and Vancouver, thanks to connecting flights. In total, Air Transat will offer direct flights to 15 European cities from Toronto. It will also operate flights from Montreal to London five times a week.

From Vancouver, Air Transat will fly three times a week to Amsterdam (the Netherlands), Manchester and London. It will also offer 12 flights a week to Toronto and seven flights a week to Montreal, making the majority of its European destinations available to its West Coast customers, thanks to connecting flights.

With their unique blends of culture and sun, Greece, Italy, Spain, Portugal and Croatia continue to attract Canadian travellers. That’s why Air Transat will offer 58 flights a week to these Mediterranean destinations from Toronto and Montreal, including one flight to Faro for the first time in the summer of 2020.

South destinations are very popular, even in summer. In 2020, Air Transat will offer 50 flights a week from Montreal to 16 destinations in Mexico, the Caribbean and the United States, including Fort Lauderdale and Orlando (Florida), San Diego (California) and New Orleans (Louisiana). There will be 30 flights a week from Toronto to 10 South destinations. Finally, Air Transat will offer flights to Punta Cana (Dominican Republic), Cancun (Mexico) and Fort Lauderdale from Quebec City.

Scheduled number of weekly direct flights to the South and the United States, in high season

Air Transat will launch the only nonstop flight between Montreal and San Diego, California , in the summer of 2020.

In addition, in light of the great interest in New Orleans , a new destination Air Transat will be offering for the first time this winter, the airline will extend its flights to the summer of 2020.

Finally, more flights to Florida from Montreal and Quebec City will be added to the program.

Direct flights from Montreal to San Diego will be offered three times a week, on Mondays, Wednesdays and Sundays, from June 15 to October 28, 2020.

Starting in November, Air Transat will offer two flights a week from Montreal to New Orleans , on Thursdays and Sundays. To respond to the high demand for this destination, the airline will be extending its service to next summer. 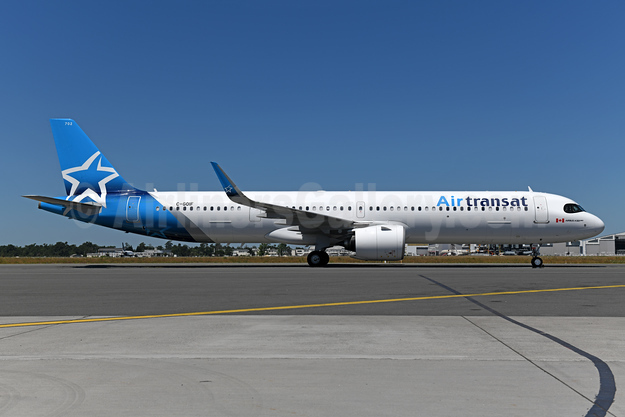 Air Canada is pleased by the announcement, earlier today, by Transat A.T. Inc. (“Transat”) of the approval, by a majority of nearly 95% of its shareholders, of its Arrangement Agreement with Air Canada under which Air Canada will acquire all its issued and outstanding shares.

“We are pleased with the outcome of Transat’s special meeting and grateful to Transat shareholders for this overwhelming show of support,” said Calin Rovinescu, President and Chief Executive Officer of Air Canada. “We will build a combined company greater than the sum of its parts that we can all be proud of.  We now look forward to engaging with Transport Canada and the Competition Bureau to secure the required approvals to complete the transaction and welcome the opportunity to demonstrate the many benefits it will bring.”

“This is the best possible outcome for all stakeholders,” added Mr. Rovinescu. “For shareholders of Transat and Air Canada, the combination delivers excellent value, while also providing increased job security for both companies’ employees through greater growth prospects. Air Canada plans to preserve the Transat and Air Transat brands and maintain the Transat head office and its key functions in Montreal. Travellers will benefit from the combined companies’ enhanced capabilities in the highly competitive, global leisure travel market and from access to new destinations, more connecting traffic and increased frequencies. Customers and the Quebec economy will derive maximum advantage of having a Montreal-based, growth-oriented global champion in aviation, the world’s most international business, spurring more employment and securing Montreal’s position as a leader among world aviation centres.”

The acquisition will proceed by way of a court-approved plan of arrangement pursuant to the Canada Business Corporations Act. The transaction remains subject to court and regulatory approvals and the other closing conditions set out in the Arrangement Agreement. If such approvals are obtained and conditions are met, the transaction is expected to be completed in early 2020. Further details regarding the transaction are provided in Transat’s management proxy circular for the special meeting of shareholders and in the Arrangement Agreement and the Amending Agreement entered into between Air Canada and Transat.

Note: If the acquisition is approved, Air Transat is expected to continue to operate as a separate brand.

Transat A.T. Inc., the parent of Air Transat, has made this announcement:

Transat A.T. Inc.  confirms that it has taken note of Pierre Karl Péladeau’s press release dated August 19, 2019 regarding his recommendation to shareholders with respect to the arrangement with Air Canada. Transat notes that pursuant to this press release, no offer to acquire Transat has been made by Mr. Péladeau or any of his business associates.

Absence of an alternative offer

The arrangement with Air Canada is the result of a rigorous and diligent process by Transat’s board of directors supported by financial and legal advisors over a period of more than 6 months. Transat has never received any offer from Mr. Péladeau or any of his business associates to acquire Transat, and this, despite the April 30, 2019 announcement to the effect that Transat was in preliminary discussions with more than one party interested in acquiring it. Since the execution of the arrangement agreement with Air Canada on June 27, 2019, Mr. Péladeau or any other interested party could have made an offer to Transat, in the manner specifically provided for in the arrangement agreement. The process contemplated permits the offeror under any qualifying offer to undertake the necessary due diligence. Transat has not received any such offer to date.

Essentially, as no other offer has been received, our Shareholders have the choice between on the one hand, receiving $18 in all-cash consideration for each Transat share they hold, or on the other hand, bearing the risks associated with the implementation of Transat’s strategic plan. There is currently no concrete alternative transaction on the table.

The Arrangement with Air Canada benefits all our stakeholders, notably (i) our travellers, by enhancing route offerings, frequencies, connection times and leisure travel options, (ii) our communities, by maintaining the Transat head office and its key functions in Montréal and by introducing additional regional and U.S. networks allowing for Montreal to become a leading global hub, and (iii) our employees, by providing better job security and additional development opportunities through greater growth prospects.

In view of the above and for the reasons described in Transat’s Management Proxy Circular dated July 19, 2019, Transat’s Board and the special committee of the Board, supported by its legal and financial advisors, continue to unanimously reiterate that the Arrangement with Air Canada is in the best interest of Transat and its stakeholders and is fair to its shareholders, and unanimously recommend that Transat shareholders:

Air Canada and Transat A.T. Inc. has made this joint announcement:

Air Canada and Transat A.T. Inc. have announced that Air Canada has agreed to increase the purchase price for the acquisition of all issued and outstanding shares of Transat, from $13 to $18 per share and have amended the Arrangement Agreement dated June 27, 2019 accordingly. Based on the increased consideration, the value of the all-cash transaction is approximately $720 million .

Air Canada has also entered into a lock-up and support agreement with Transat’s largest shareholder, Letko Brosseau & Associates Inc., who beneficially owns or has control or direction over 7,277,104 Class B voting shares or approximately 19.3% of all issued and outstanding shares of Transat. Under the terms of its Lock-up and Support Agreement, Letko Brosseau has agreed to support and vote all of the Class B voting shares of Transat it controls at the Special Meeting of Shareholders of Transat on August 23, 2019 or at any adjournment or postponement thereof, in favour of Air Canada’s acquisition of Transat.

Amendments to the Arrangement Agreement between Air Canada and Transat were unanimously approved by the Board of Directors of Transat and its Special Committee, and are included in an Amending Agreement that provides for the following:

The terms and conditions of the Arrangement Agreement otherwise remain unchanged.