Japan Airlines (JAL) announced additional revisions to its international network plans between January 28,2022 to February 28,2022 on the route for Seoul and on the route frequency plan for each direction except for the Seoul route for March 01 to March 26,2022.

*2, which covers medical, testing, and isolation expenses for those who test positive for the new coronavirus infection while traveling.

✓ In order to strengthen the network between Asia and North America, we will change the operating days of the Tokyo Haneda – Los Angeles route increase the number of flights on the Tokyo Narita – Hong Kong route.

✓ In order to improve the convenience of customers traveling to and from destinations other than Tokyo, such as for relocation or return to their home country, we will continue to offer the following services.

Extra flights on the following flights.(March01-March26.)

Japan Airlines Co., Ltd.  (JAL) is aiming to launch an Air Taxi business using eVTOL* in FY 2025, and plans include a scenic flight to view the area around Yumeshima, the venue for the OSAKA-KANSAI World Exposition to be held in the same year, and an Air Taxi service connecting the venue and Kansai International Airport(KIX),etc.

At this time, JAL has been selected by the Osaka Prefectural Government to participate in the “Demonstration Test toward the Realization of eVTOL (hereinafter “the project”)”(*1), and will conduct a demonstration experiment using helicopters in Osaka.

Outline of the Demonstration Test:

① Verification based on actual operation (scheduled for November 2021)
We will conduct actual helicopter flights over Yumeshima, the site of EXPO 2025 OSAKA, KANSAI, JAPAN, to investigate the constraints on the flight environment and ground facilities. This will lead to the establishment of a flight environment in which diverse aircraft can coexist.

② Verification of social acceptability (scheduled for February 2022)
In cooperation with Volocopter, GmbH (*2), which is participating in the Osaka Roundtable (*3) for the social implementation of eVTOL together with JAL, this virtual flight combines a helicopter flight scenery over Osaka with an in-flight view of eVTOL. In addition to making eVTOL feel familiar to many people, we will conduct a survey on customer expectations by conducting a questionnaire before and after experiencing a virtual flight, and utilize the results for the future realization of eVTOL in the Osaka area.

“eVTOL” is expected to play an active role in a wide range of fields, such as Air Taxi services, emergency
lifesaving and disaster response, taking advantage of its mobility similar to that of a helicopter. JAL will use the results obtained from this project in cooperation with the Osaka Roundtable to contribute to the realization and popularization of eVTOL, which Osaka aims to achieve

＊eVTOL :electric Vertical Take-Off and Landing: A small aircraft that can take off and land vertically by rotating multiple rotors with an electric motor. It attracts attention as a means of next-generation transporting that fuses drone and electric vehicle technologies.

Previously the airline made this announcement:

Japan Airlines (JAL) and Volocopter GmbH (Volocopter) entered into a cooperation agreement to promote the development of the urban air mobility industry for next generation air transportation options of passengers and goods.

In February 2020, Japan Airlines Innovation Fund invested in Volocopter, which is aiming to create and bring next-generation electrically powered air taxis and heavy lift cargo drone technology to the market, as part of their Series C funding round. With this agreement, JAL and Volocopter will strengthen their partnership to jointly explore business opportunities for air mobility services, specifically Volocopter’s eVTOL technology, in Japan.

The agreement outlines that Volocopter and JAL work on permanent sustainable commercial operations of air taxis in Japan. By establishing local partnerships, jointly approaching Japanese cities and prefectures and working on market demand and social acceptance, JAL and Volocopter will prepare for commercial launch in Japan within the next 3 years. 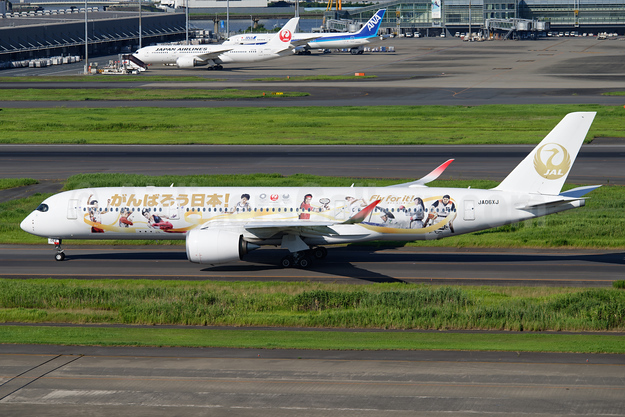 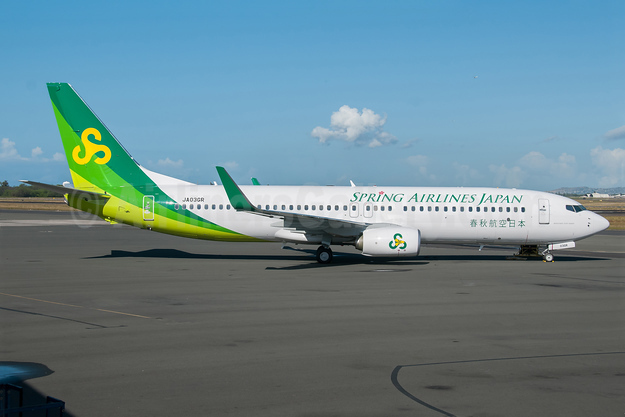 JAL – Japan Airlines wants to expand its 5% investment in Spring Airlines Japan to a controlling 51% or higher share.

The purchase of additional shares is expected to be accomplished in May.

Spring Airlines Japan (Tokyo-Narita) is a low-cost airline. It is currently 33% owned by Spring Airlines, a Chinese low-cost carrier, with the remaining shares held by Japanese investors including JAL. The airline began operations in August 2014. The airline specializes in bringing Chinese tourists to Japan.

JAL is eager to cash in on the expected return of Chinese tourists.

Read more from the Japan Times. 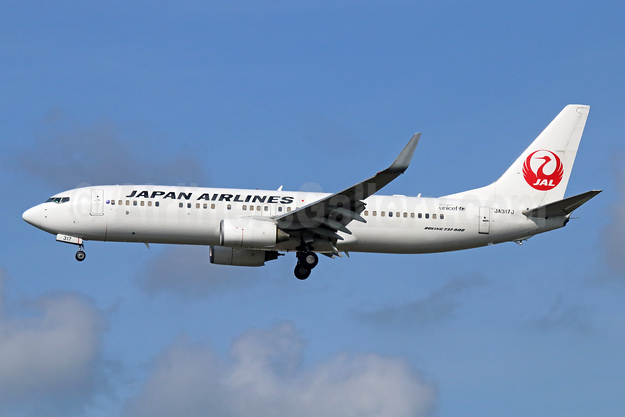 The JAL Group has announced further reductions on its domestic network between April 29 and May 31, as the carrier is expecting a slight decline in travel demand in response to the number of COVID-19 cases reported in Japan. In accordance with the conditions of carriage, customers affected by the cancelations will be re-accommodated on an alternative flight.

The JAL Group has implemented key measures to provide our customers with a safe and secure travel experience, including an optional COVID-19 fee-based test for those with valid domestic reservations. To date, the carrier has received more than 16,000 applications to conduct pre-travel testing for COVID-19. We sincerely apologize for any inconvenience, but would like to ask for our customer’s understanding during this unprecedented time.

In other news, Japan Airlines is applies sustained antiviral and antibacterial coating to safeguard customers throughout the travel experience:

-Aircraft are disinfected during the night, but to further enhance hygiene precautionary measures, a SIAA* certified antiviral and antibacterial coating will be applied inside the aircraft to ensure the well-being of our valued customers when they travel on a JAL operated flight.
-Antiviral and Antibacterial coatings will be applied at every customer touchpoint, including the airport counter, check-in equipment and all lounges located in Japan.
* SIAA Society of International sustain growth for Antimicrobial Articles

Since the beginning of the global pandemic, the JAL Group has proactively implemented key measures against COVID-19 to provide our customers with a safe and secure travel experience. Today, the carrier strengthened its commitment by introducing an industry leading antiviral and antibacterial coating inside the aircraft cabin.

The SIAA certified coating will be applied to surfaces inside the aircraft, which will effectively inactivate most viruses within the cabin. Locations include the lavatory, seats, armrests, overhead bins, interior walls and various locations that customers may come in contact with during a flight. The coating agent has been proven to reduce viral levels in a safe manner, as certified by the SIAA. Aircraft that have been applied with the coating will display the SIAA certification near the entrance of the aircraft. The coating process will start in April 2021 and is expected to be completed by July 2021. (Japan Air Commuter and Hokkaido Air System will be completed by year-end)

Back in November 2020, JAL began applying the antiviral and antibacterial coating at domestic airport check-in counters, automated baggage check-in machines, check-in kiosks, boarding gate counters, and on airstairs and will gradually expand the program at airports nationwide. Antiviral and antibacterial coatings have also been applied to airport security areas, wheelchairs, and baby strollers.

Since March 15, the carrier is offering an optional COVID-19 fee-based testing service, and has received more than 17,000 applications to conduct the test prior to boarding a Japan domestic flight. In addition, the carrier introduced touchless check-in kiosks at Haneda Airport in March 2021 and has since installed the kiosks at Sapporo, Osaka (Itami), Fukuoka, Okinawa and Hiroshima airport.

JAL has been awarded the highest levels of COVID-19 safety certifications from two leading international airline advisory organizations, in recognition for its enhanced JAL FlySafe measures at the airport and on board. JAL is the first airline in Asia to simultaneously achieve the highest level 5-Star COVID-19 Airline Safety Rating from SKYTRAX, and the highest Diamond Certification from APEX Health Safety powered by Simpliflying.

JAL – Japan Airlines has announced it has early-retired its 13 remaining Boeing 777-200s.

The type was grounded by JAL in February 2021 following the Pratt and Whitney PW4000 engine-incident with United Airlines.

“JAL has decided to accelerate the retirement of all P&W equipped Boeing 777 by March 2021, which was originally planned by March 2022.”

Key highlights include:
– To increase scheduled service from Narita-Bangkok to five per week from the month of June to provide seamless connections for customers from North America.
– To increase service between Narita-Bengaluru to once per week from the month of June.
– In order to accommodate customers traveling to cities outside of Tokyo, the carrier will operate extra section flights as shown below.
a) One flight from Dallas Fort Worth to Nagoya Chubu in May and July, respectively
b) One flight from Los Angeles to Nagoya Chubu in June
c) One flight per week from London to Osaka Kansai through the months of July and August
d) Increase one scheduled flight from Los Angeles to Osaka Kansai in June

The carrier will continue to review travel restrictions within each destination and update its international network plan, while asking for our customer`s understanding during this unprecedented time. Schedules are valid as of April 1 and are subject to government approvals

The JAL Group has taken proactive steps to implement and strengthen key measures against COVID-19 to provide customers a safe and secure travel experience. As a result of the carrier`s proactive health safety measures, JAL was certified and awarded by Skytrax and APEX in March 2021.

Note: For schedules between July-September, the data shown above do not include routes to Vladivostok, Southeast Asia, Hawaii and Guam. Details will be announced at a later date.

Extra Section Flights to Chubu Centrair Airport
To support essential travel needs for customers planning to return to Central Japan during the summer, JAL will operate one-way flights from Dallas Fort Worth and Los Angeles. Tickets will be available for sale April 2. (11:00am Japan Time)