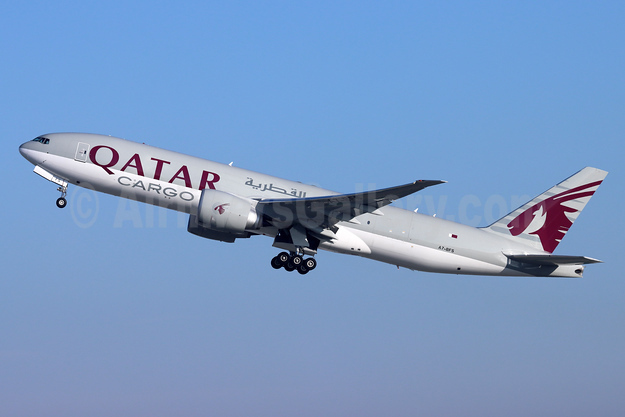 Five Qatar Airways Cargo freighters departed to China on February 21, 2020 carrying approximately 300 tons of medical supplies donated by the airline to support Cornavirus relief efforts. The five flights departed one after the other bound for Beijing, Shanghai and Guangzhou as part of Qatar Airways’ voluntary offer of free air cargo transportation for medical relief aid organized by Chinese Embassies and Consulates worldwide to fight the coronavirus emergency.

The convoy follows an earlier batch of critical medical relief aid transported by Qatar Airways Cargo to Shanghai on February 2, 2020. The shipment included 100,000 medical-grade N95 respiratory masks and 2,700 medical-grade disposable latex gloves, providing essential protection to healthcare professionals working around the clock at hospitals in Hubei Province, the epicentre of the virus. The airline is planning to transport additional donations in the coming weeks.

The ‘Green Channel’ initiative for complimentary air transportation was announced jointly by Qatar Airways and the Chinese Embassy in Qatar on February 7, 2020. Qatar Airways is the first international airline to volunteer emergency relief flight delivery.

Qatar Airways is also working closely with the World Health Organization and local authorities worldwide to safeguard the health and safety of its employees and passengers. Its modern fleet is protected with High-Efficiency Particulate Air (HEPA) filtration systems, eliminating 99.97% of fine airborne particles from circulating air in cabins, greatly restricting the spread of airborne fungi, viruses and bacteria.

Ethiopian Cargo and Logistics Services has announced that it has started once weekly freighter service to Bangkok, Thailand and Hanoi, Vietnam as of August 16, 2019.

The flight schedule to Bangkok and Hanoi is as per the below:

Qatar Airways, one of the world’s leading air cargo carriers, announced a commitment today to purchase five additional 777 Freighters from Boeing [NYSE: BA]. The deal, valued at $1.8 billion at list prices, was unveiled at the Paris Air Show and signed in the presence of His Excellency Jassim Saif Ahmed Al-Sulaiti, Qatari Minister of Transport and Communications.

When the purchase is finalized, it will be posted to Boeing’s Orders and Deliveries website.

Qatar Airways has rapidly grown its air cargo operations to serve more than 60 global destinations, becoming one of the top international air freight operators in the world. The latest freighter deal builds on the airline’s 777 Freighter order book as the airplane has become the backbone of Qatar Airways freighter fleet. It currently operates 23 freighters, including 16 Boeing 777 Freighters.

Boeing and China Airlines today announced the airline’s intent to order up to six 777 Freighters to modernize its cargo fleet. China Airlines plans to transition to the world’s largest and longest range twin-engine freighter as it launches operations from Taipei to North America and Europe – two key markets that provide higher yields for the carrier.

The order will be reflected on Boeing’s Orders and Deliveries website once it is finalized.

The 777 Freighter is capable of flying 4,970 nautical miles (9,200 km) with a maximum payload of 102,010 kg (224,900 lbs). The airplane will allow China Airlines to make fewer stops and reduce associated landing fees on these long-haul routes, resulting in the lowest trip cost of any large freighter and superior ton-mile economics. In addition, the 777 Freighter features market-leading capacity for a twin-engine freighter, accommodating 27 standard pallets, measuring 96 inches by 125 inches (2.5 m x 3 m) on the main deck. This allows for lower cargo handling costs and shorter cargo delivery times.

China Airlines operates 51 Boeing airplanes. The addition of 777 Freighters will enable the carrier to streamline maintenance and parts for its 777 fleet. The carrier uses a number of Boeing Global Services solutions to support their operations, including Boeing’s Airplane Health Maintenance and Maintenance Performance Toolbox on all of their 777, 747-400 and Next-Generation 737 aircraft. These data-driven platforms track real-time airplane information, providing maintenance data and decision support tools that allow technicians to quickly and correctly resolve issues. On the ground and in the air, China Airlines’ entire fleet uses Jeppesen’s FliteDeck Pro and access to digital navigation charts to optimize performance and enhance situational awareness.

Boeing is the world’s largest aerospace company and leading provider of commercial airplanes, defense, space and security systems, and global services. The company supports commercial and government customers in more than 150 countries. Boeing employs more than 150,000 people worldwide and leverages the talents of a global supplier base. Building on a legacy of aerospace leadership, Boeing continues to lead in technology and innovation, deliver for its customers and invest in its people and future growth.

Turkish Airlines and Boeing today announced an order for three 777 Freighters as the flag carrier of Turkey continues to soar on record financial results and double-digit passenger and cargo growth. The order adds more of the long-range freighter to Turkish’s fleet as the airline pursues its goal of becoming the world’s largest cargo carrier.

The new order comes days after Turkish Airlines posted record profits for the first nine months of 2018 on strong passenger and cargo demand. The carrier’s air freight business saw a 25-percent tonnage increase and a 29-percent revenue increase compared to the same period a year ago. The results extend the airline’s success in recent years as Turkey has become one of the largest and fastest-growing aviation markets.

In line with the rapid growth, Turkish Airlines has steadily expanded its current and future fleet. Last January, the carrier announced the order of three 777 Freighters. Two months later, Turkish finalized an order for 25 787-9 Dreamliners and five options to prepare for growing demand at Istanbul’s third airport, named “Istanbul Airport” by Turkish President Recep Tayyip Erdoğan during its official opening last month. Over the past few months, Turkish has begun taking delivery of new 737 MAX airplanes to refresh its single-aisle jets. In all, the airline’s fleet of Boeing jetliners has grown to more than 160, with nearly 100 additional jets on order.

With more than 30 777s in its fleet, Turkish Airlines is among the top 10 operators of the wide-body jet in Europe and the Middle East.

To support the long-term growth of the Turkish aerospace industry and strengthen Boeing’s presence in the country, Boeing launched a strategic partnership program in Turkey last year, called the National Aerospace Initiative. Aligned with the targets of Turkey’s Vision 2023 that set for the 100th anniversary of Turkish Republic’s foundation, the initiative lays out a strategic collaboration framework in four key areas: industrial development, technology acceleration, services collaboration and advanced-skill training.

In line with these goals, Boeing is planning to open an engineering center in Istanbul that would specialize in research and support Turkey’s growing aerospace capability. The company also recently expanded its collaboration with Turkish Technic, the maintenance arm of Turkish Airlines. Under the agreement, Turkish Technic becomes a strategic supplier for Boeing’s Global Fleet Care program, providing operators with line maintenance, heavy maintenance, component service and repair for multiple aircraft models. Additionally, Boeing and Turkish Technic will partner to train and certify aircraft technicians. 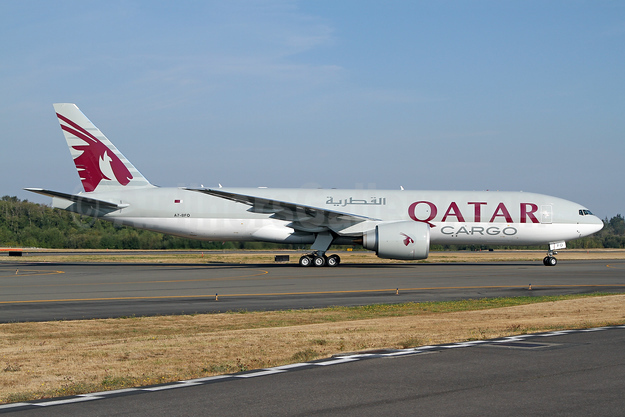 Qatar Airways Cargo is pleased to announce that it has commenced freighter services to Macau, the carrier’s fourth freighter destination in Greater China. The arrival flight was greeted with the traditional water cannon salute (below).

Alongside the launch of the new twice-weekly services to Macau, the carrier has also introduced transpacific freighter services, providing direct flights over the Pacific from Macau to North America, resulting in reduced flight times and faster services for customers.

The carrier’s Boeing 777 freighter operates twice a week from Doha to Macau. From Macau, it departs across the Pacific to Los Angeles and Mexico City. On the return leg, the freighter flies over the Atlantic to Liege before arriving at the carrier’s hub in Doha. One hundred tons of cargo capacity is offered on each flight leg. 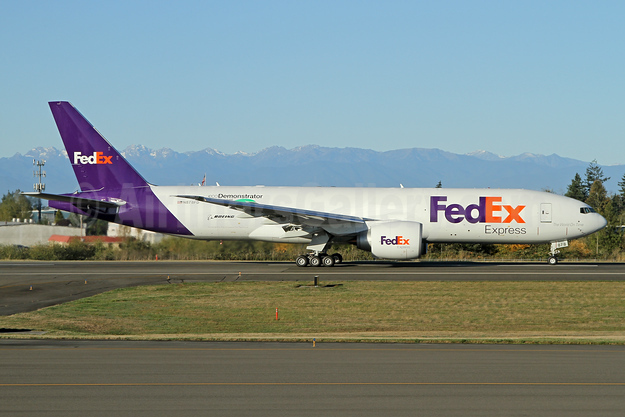 Boeing made this announcement on social media:

This FedEx Express Boeing 777F Freighter is the first commercial aircraft to fly using 100% biofuel. The “sky’s the limit” for our ecoDemonstrator Program to deliver new technologies to meet environmental goals.

Boeing previously announced the innovative program in November 2017 for the 777F:

To most, it looked like a normal delivery to FedEx Express recently when Boeing Commercial Airplanes handed over the keys to a 777 Freighter. Yet, the special decals attached to the fuselage indicated it will be the next ecoDemonstrator, the fifth iteration of the flight test program.

In 2018, Boeing and FedEx plan to work together to test more than 35 technologies aboard the FedEx-owned 777 Freighter, including flight deck enhancements, compact thrust reverser and advanced materials.

Before testing innovations that could enhance flight safety and efficiency, the airplane will first go into revenue service in the FedEx fleet through the end of the year, flying international routes. The freighter will be returned to Boeing in January, when it will serve as the ecoDemonstrator testbed through May.

Some of the technology, with the goal of reducing emissions and noise, also can improve airlines’ gate-to-gate efficiency and other operational goals. Proven ecoDemonstrator technologies and processes might be incorporated into existing production models, made available for in-service fleets or applied to new airplane development programs.

After testing is completed, the airplane will be returned to FedEx in original condition so the carrier can return the airplane to service in its fleet. 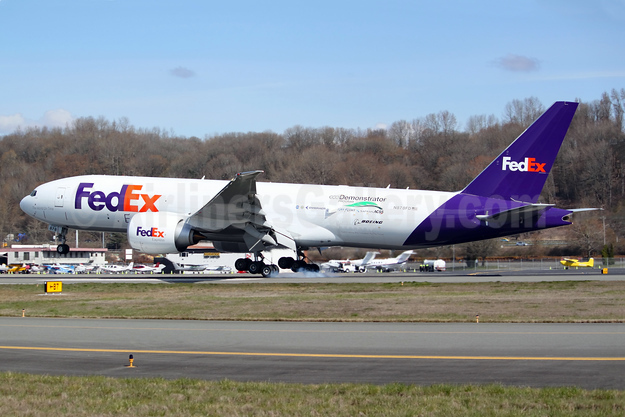 All Nippon Airways (ANA) and Boeing announced the Japanese carrier has finalizes its order for two 777 Freighters valued at $678 million according to list prices.

While ANA is a major operator of the 777 passenger jet, it has grown its cargo operation with the medium-sized 767 Freighter. In adding the 777 Freighter – the world’s largest and longest range twin-engine cargo jet – ANA is expanding its cargo capabilities just as the air freight market keeps growing at historically high rates.

ANA says it plans to fly its new 777 Freighters on international routes, particularly to Asia, China, and North America. With this order, ANA will become the first airline in Japan to operate 777 Freighters.

The delivery is scheduled for 2019.

Boeing and Turkish Airlines announced that the carrier ordered three more 777 Freighters in December 2017. The new order came weeks after the carrier took delivery of two of the large cargo jets as part of its plan to further expand its freight business.

Boeing and Turkish Airlines celebrated the delivery of the airline’s first 777 Freighter, the world’s longest-range twin-engine freighter. The airplane and a second freighter on order will help the airline expand its cargo business.

Based in Istanbul, Turkish Airlines is one of the fastest growing airlines in the world. It carries over 60 million passengers a year, with direct flights to 300 destinations in 120 countries. The airline made its first domestic flight in 1933 and the first international flight in 1947. Turkish Airlines was founded in 1933 with a fleet of five airplanes that carried a total of 28 passengers, expanding to 329 aircraft today.

Photo: Turkish Airlines/Boeing. Turkish Airlines Boeing 777F TC-LJL (msn 60403) is pictured arriving at the Istanbul base. The freighter was actually handed over by Boeing to the carrier on November 30, 2017.