Icelandair has renewed an agreement with the US airline JetBlue on the airline’s scheduled flights. This is a partnership agreement which means that both airlines can sell and issue airline tickets with each other. Thus, Icelandair customers can purchase a ticket from Iceland to a number of JetBlue’s destinations in the US, the Caribbean, Central and South America. At the same time, JetBlue customers are able to purchase tickets to Iceland and many of Icelandair’s destinations in Europe.

The agreement between Icelandair and JetBlue, which first came into effect in 2011, has now been renewed until 2024. Since 2017, the airlines have also offered their customers the opportunity to collect loyalty points from both companies.

In other news, Icelandair has painted its Boeing 757-256 TF-FIS in a special National Geographic livery for NG’s around-the-world luxury 2020 tours.

Well suited for this incredible journey, a Boeing 757 provides unparalleled flexibility with its long-range capabilities and ability to land in smaller airports. Flying direct and avoiding layovers, we are able to maximize our time in each destination while delivering a superior travel experience. Instead of the standard 233 seats, the jet’s interior has been customized to accommodate just 75 passengers in two-by-two, VIP-style leather seating. You’ll enjoy excellent access to experts and staff, who provide informative briefings and lectures throughout the expedition. 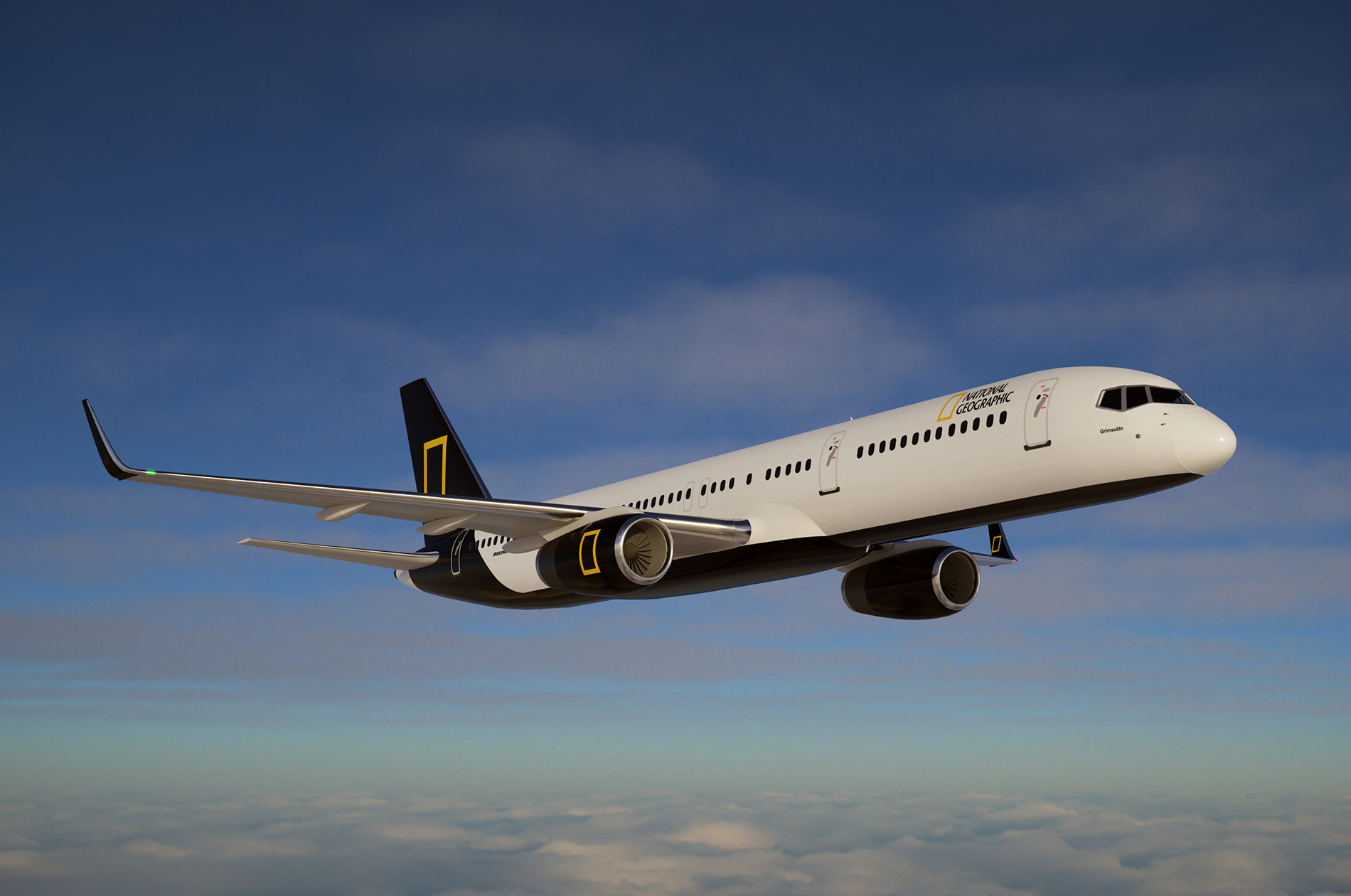 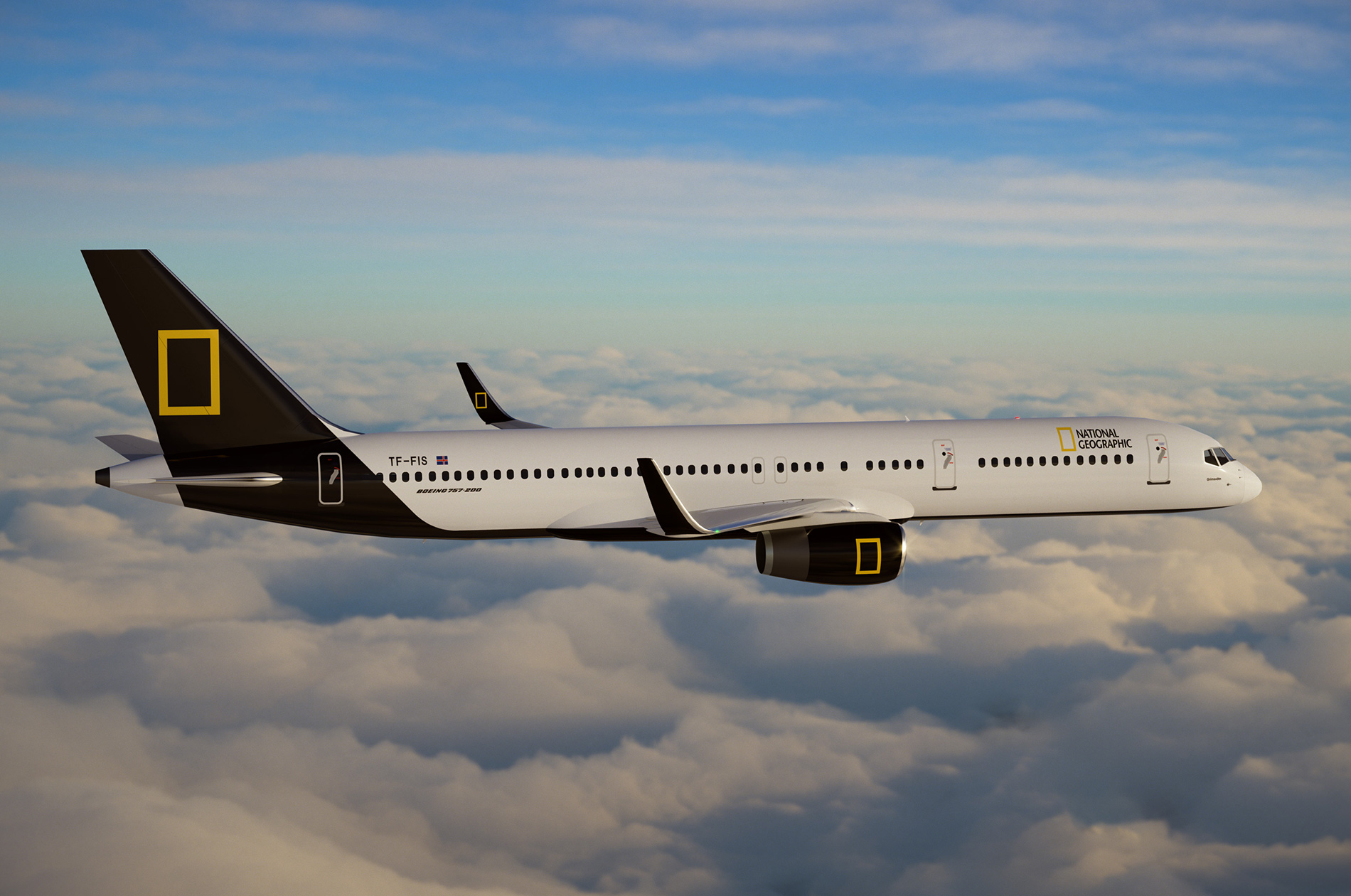 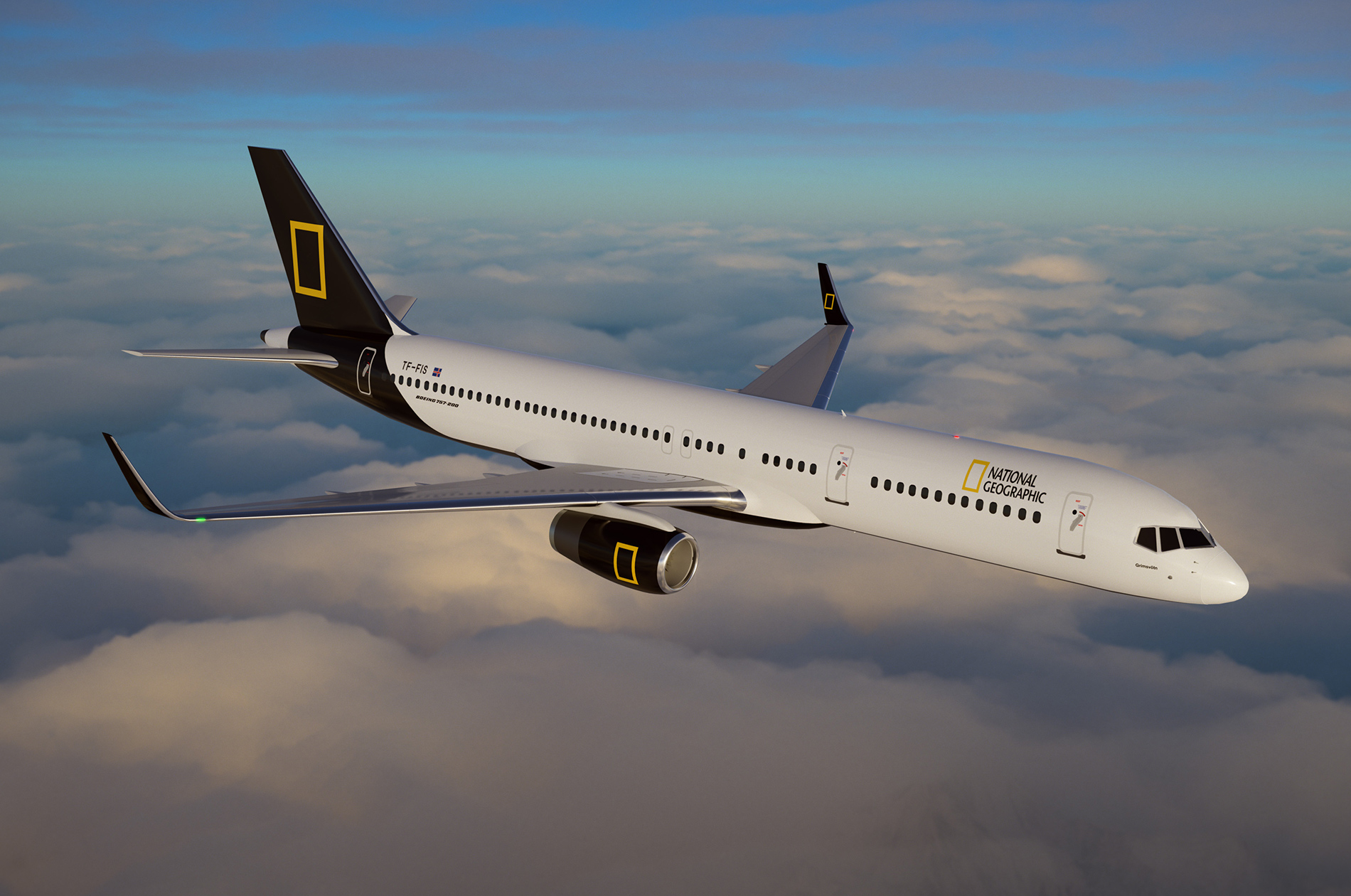 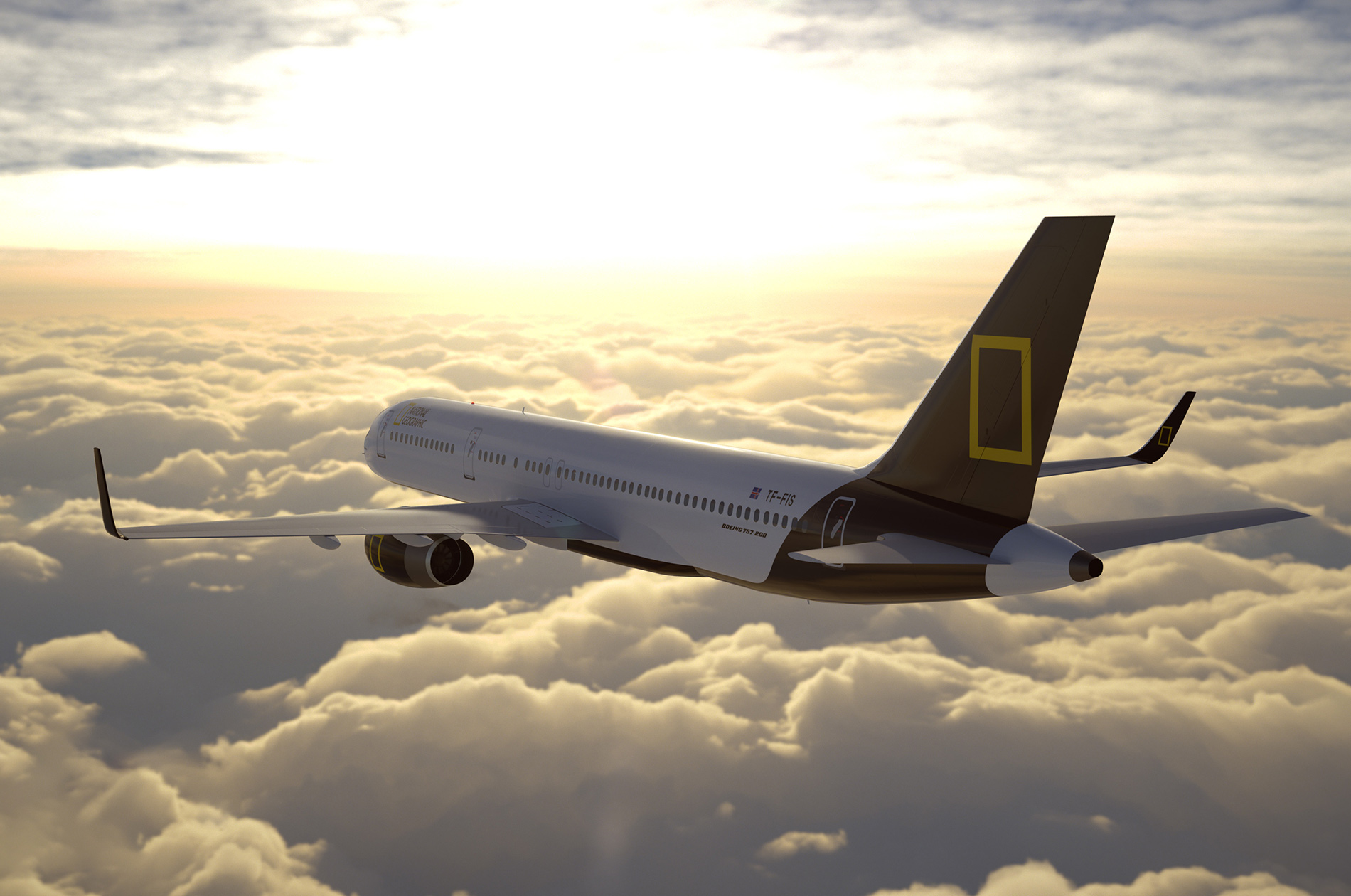 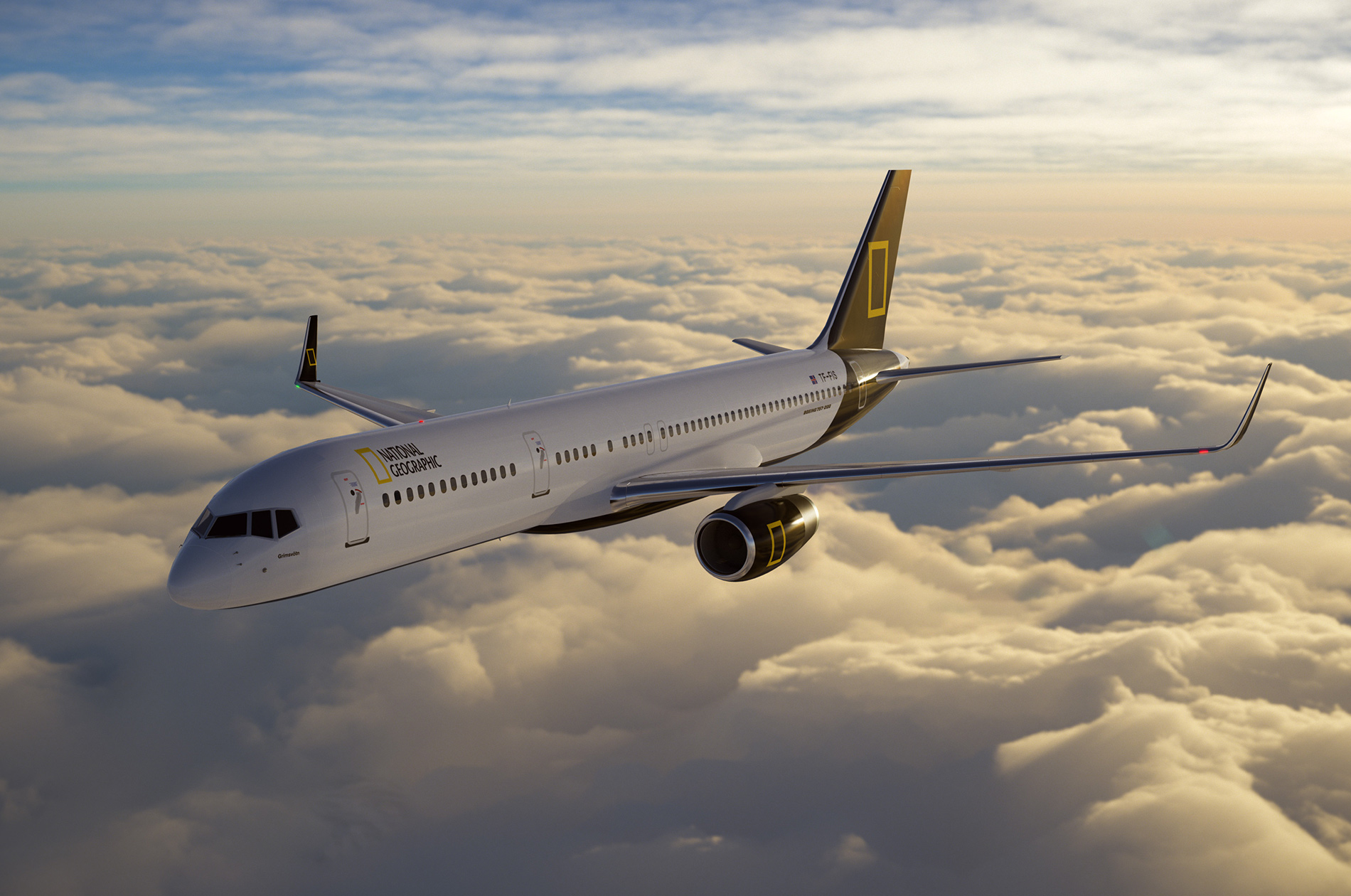 Icelandair Cargo made this announcement:

Icelandair Cargo handles all shipments to and from Iceland for FedEx and TNT, following a new three-year agreement going into effect in early 2020. After FedEx’s acquisition of TNT, FedEx and TNT have merged their operations, and aim to expand their operations in Iceland in cooperation with Icelandair Cargo. FedEx is one of the largest express transportation companies in the world, headquartered in the United States.

Following the agreement, some changes will be made to Icelandair Cargo’s flight schedule to Europe. With Liege being one of FedEx’s and TNT’s main airports in Europe, there will be a significant increase of flights to Liege in Belgium.

Icelandair Cargo will fly seven times a week to Liege and three weekly flights to the East Midlands in the UK. The company also continues its freight services to all of Icelandair’s 40 destinations.

Icelandair Cargo got a considerable boost following Icelandair’s decision to add Boeing 767 aircraft to its fleet, as these aircraft can transport significant amounts of cargo along with their passenger operations. Icelandair now has four Boeing 767s in its fleet. Icelandair Cargo’s estimates to carry almost 50,000 tonnes of freight this year, of which around 60% is transported the company’s passenger aircraft.

The grounding of its Boeing 737 MAX aircraft on March 12 has resulted in a significant impact for the company.

“The MAX aircraft were intended to cover 27% of Icelandair’s passenger capacity in 2019. For this reason, the position in which the Company now finds itself as a result of the suspension of the MAX aircraft is without any precedent and has a significant impact on the operations and performance of the Company.

In these circumstances, our key focus has been on minimising the impact of the suspension on the Company, our passengers and the Icelandic tourism industry by adding leased aircraft to our fleet during the summer. We have also placed emphasis on ensuring seating capacity to and from Iceland, with the result that the number of Icelandair’s passengers travelling to Iceland has increased by 39% in the second quarter compared to the same period last year. Despite these mitigating measures, which have prevented major cancellations of flights, the situation has caused considerable disruptions in our flight schedule and our operations. This has in turn impacted our passengers and presented us with complex challenges. Our employees have done an outstanding job under very difficult circumstances during the peak season, where they have joined forces to resolve matters for our passengers as successfully as possible.

The objective of the Company remains clear – to improve the profitability and operations of the Company. We have taken a number of measures over the recent months that are already beginning to return results. The Company’s performance, if the estimated impact quantified to date of suspension of the MAX aircraft is excluded, has improved between years, with EBIT positive by $25.9 million, up by $45.7 million from the preceding year.

Furthermore, an experienced international investor, PAR Capital Management, joined the Company’s shareholder base in April and, in addition, we signed an agreement on the sale of Icelandair Hotels  and related real estate in July. Both of these developments will strengthen Icelandair’s position further and provides an important confirmation of the favourable outlook for the Company and future opportunities in Icelandic tourism.”

Is Icelandair ready now to jump to Airbus?

Icelandair has made changes to its flight schedule until September 15, 2019 as it is expected that the suspension of Boeing 737 MAX aircraft will last longer than anticipated.

To minimize the impact on its passengers, Icelandair has already added three leased aircraft to its fleet for the summer season. Furthermore, the Company is now working on the leasing of an additional Boeing 767-300 aircraft.

Icelandair will start implementing these changes in the next few days and Icelandair’s service representatives will contact the passengers affected.

With these changes, the total seat capacity from July 15  to September 15 will decrease by 5% from what the Company had estimated. However, following these changes the number of available seats during the period will still increase by 10% year-on-year. Icelandair’s emphasis will continue to remain on increasing the number of passengers to and from Iceland and as of today, the number of bookings by passengers traveling to Iceland during the period June-August has increased by over 30% compared to the same period last year.

The financial impact of the suspension of the Boeing 737 MAX aircraft is uncertain as the amount of compensation from the aircraft manufacturer is still under review. 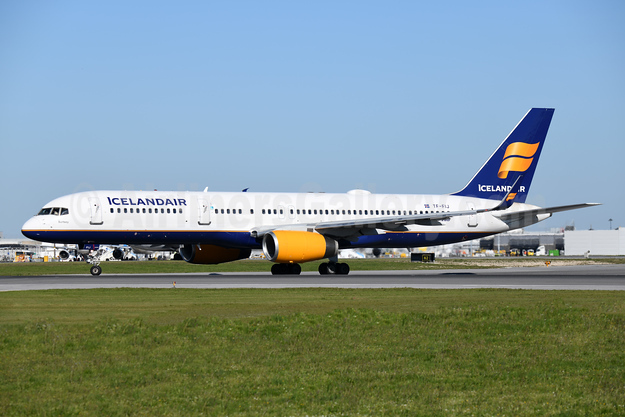 A new video from JustPlanes:

Icelandair’s flight schedule has been updated based on the assumption that the Boeing 737 MAX 8 aircraft will be suspended until June 16, 2019. The decision to add wet-leased aircraft to the fleet has reduced the impact of the suspension on Icelandair‘s flight schedule. As announced on April 1, 2019, the Company entered into a leasing agreement regarding two Boeing 767 aircraft. Today, Icelandair has finalized a leasing agreement of the third aircraft, a 184-seat Boeing 757-200, which will be in operation from May 15 until the end of September 2019.

During the period April 1 to June 15, 2019, Icelandair will reduce its frequency of flight trips by around 3.6%, which accounts for around 100 trips. In most cases, these are flights to destination where more than one flight is available on the same day. Despite these changes, the total seat capacity during the period will essentially remain the same since the Company will use Boeing 767 aircraft that are larger than the Boeing 737 MAX. Therefore, these changes will not have significant effects on the total number of passengers during the period.

Furthermore, Icelandair has decided to cancel its flights to Cleveland in the US and Halifax in Canada this year. This is partly due to the suspension of the Boeing 737 MAX aircraft but also because of a decision to focus on meeting increased demand for flights to and from Iceland by moving supply from destinations that focus on travel between North America and Europe via Iceland.

The financial impact of the suspension of the Boeing 737 MAX aircraft is uncertain at this time as the amount of compensation from the aircraft producer is still under review.

Because of changes in the competitive environment, Icelandair has decided to add flights to Southern Europe. Icelandair will offer three flights a week to Alicante in cooperation with Icelandair Group’s subsidiary, VITA, a travel agency that organises trips from Iceland.

Furthermore, Icelandair has started working towards adding aircraft to its fleet that will be fitted as economy only. These aircraft will have a larger number of seats than the Company‘s current aircraft, which lowers unit cost and therefore strengthens Icelandair’s competitiveness in this market. These aircraft are better suited for certain destinations that are not part of Icelandair‘s core route network, such as Alicante and Tenerife, and therefore present opportunities for growth. Icelandair expects the first aircraft of this type to be in operation in the beginning of the year 2020.