Air Malta celebrated its return to Madrid for Summer 2022. The flight to the Spanish capital restarted on April 4, 2022 with up to three times a week operation every Monday, Wednesday and Friday. These services have been announced as part of over 125 return flights per week to 18 key European destinations which are being served by Air Malta this summer.

Air Malta’s first flight took off on 1st April 1974. The airline has been instrumental in opening and connecting Malta to the rest of the world, diversifying and presenting new tourism market opportunities to and from the islands.

The flight schedule will operate as follows:

Air Malta was honored to fly Pope Francis back to Rome yesterday afternoon after a two-day pastoral visit to the Maltese Islands.

The aircraft chosen for the flight, with registration 9H-NED, is the latest Airbus A320neo aircraft in the airline’s fleet. The aircraft was specially configured for the occasion with three cabins: the Papal Suite at the front, a middle cabin for the Church Prelates and the other dignitaries accompanying the Pope, and a rear cabin for media representatives covering the Pope’s visit.

Air Malta Executive Chairman David G Curmi was on the special flight accompanying the Pope back to Rome.

KM4282 was chosen in view of the reference in the Bible’s ‘Acts of the Apostles’, chapter 28 verse 2, of Malta and the extraordinary hospitality shown by the Maltese after St Paul was shipwrecked on the Islands in AD60.

This is the fourth time Air Malta has been honored with the privilege of flying a Pope to Rome. Pope John Paul II travelled twice on the airline on the 27 May 1990 and again on the 9 May 2001. Pope Benedict XVI also flew on Air Malta on the 18 April 2010 after a two-day pastoral visit to the Islands.

All photos by Air Malta. 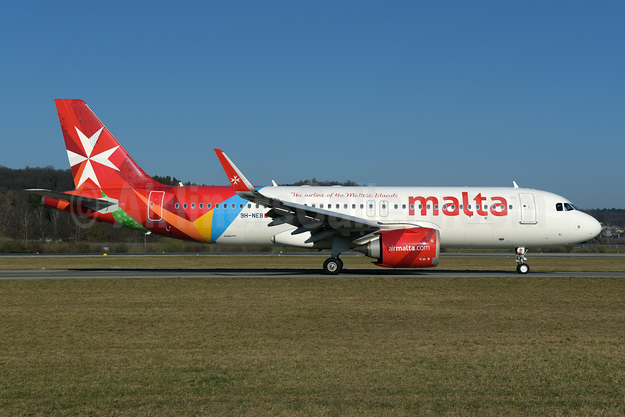 After an absence of over a year, Air Malta will be returning with a daily service to London Gatwick and with a three times a week service to Madrid. London Heathrow will be the most served route with 15 weekly scheduled flights, followed by Munich (12), Rome (10), and Paris with nine weekly frequencies on Orly and seven weekly frequencies to/from Charles De Gaulle airport. Amsterdam, whilst operating a daily service, will see this increasing to eight services per week during July – October.

Air Malta has announced it will cut half its workforce in order to keep the airline viable.

The airline currently has 890 employees.

The current plan is to offer around 470 employees jobs in other Malta government sectors.

Previously Air Malta announced it was considering consolidating its flight schedule for the months of January and February by reducing frequencies on certain routes without however cancelling any of the 16 routes the airline is operating to this winter. This curtailing, necessitated due to the dramatic downturn in demand over recent weeks, is presently very common in the industry especially in the current scenario during which airlines had to deal with multiple and unprecedented travel disruptions.

So far, unlike some other airlines operating on the Malta route, Air Malta is not planning to cancel any of its planned scheduled routes for this winter or for summer 2022.

Commenting on this plan, Air Malta’s Executive Chairman, David G Curmi, said, “We are taking such decisions to match customer demand and avoid flying near empty aircraft. Such assessments are ongoing and will continue until demand returns to healthy levels. In these situations, we need to be very agile and financially disciplined to be able to adjust seat capacity and focus on efficiency to protect our liquidity and cash performance. Given the unprecedented times we are living in and the challenges that Air Malta is facing, we are continuously optimizing our network for profitability and liquidity, and we plan to continue to do so without compromises.”

The Chairman added, “In this ever-changing scenario, it is very difficult to make any predictions, however Air Malta is committed to remain an all-year-round vital link to mainland Europe not only for travel and tourism but also for the transfer of urgent medical cargo, mail and other import and export freight required for our various industries.”

Roy Kinnear, Air Malta’s Chief Commercial Officer added, “Following the surge of the Omicron variant and the introduction of lockdowns or partial lockdowns and travel restrictions across much of Europe, Air Malta saw a slowdown in new bookings and received a number of cancellations for travel over the holiday period and in January and February. The cancellations came across most of Air Malta’s markets with varying degree. These fluctuating trends have been typical last year with markets opening and closing depending on threat levels. The combination of the current slowdown in bookings and with January and February being naturally lower demand months, has unfortunately driven an increased level of frequency consolidation compared to previously anticipated, but commercially necessary to do so.

“Most airlines vary their allocated capacity throughout the year as Malta’s tourism inflows are highly seasonal, with the peak season in the summer months from July to September and the low season in the winter months from November to February. While other airlines operate at a significantly lower capacity in the winter months, Air Malta ensures connectivity with the major European cities and key airports all year round,” added Mr Kinnear.

ITA Airways and Air Malta, have signed a broad codeshare agreement connecting the networks of the two airlines. This new commercial partnership, which applies to flights departing from Sunday 31st October, is bound to boost business travel and tourism between Italy and Malta and will offer customers more options and better flight schedules when traveling through the two airlines’ hubs in Rome and Luqa, Malta.

Following this agreement, ITA Airways’ and Air Malta’s customers can now fly seamlessly to their desired destination with a single ‘unique’ ticket, checking-in at the airport of departure, and collecting their checked-through baggage at the end of their trip in the arrival airport.

The new codeshare flights are now available for sale through the airlines’ respective websites (itaspa.com and airmalta.com), reservation systems and in travel agencies.

Air Malta has operated its longest and farthest non-stop flight. The charter flight, to Rwanda’s capital, Kigali, carried 135,690 AstraZeneca vaccines donated by the Government of Malta to the African nation.

The seven-hour long direct flight, covered 2426 nautical miles, departed Malta at 2:00am on Friday morning and landed at Kigali at 9:00am.

During the pandemic the airline was instrumental to the Maltese Islands by carrying hundreds of tons of cargo that included vaccines, medicines, medical supplies, and personal protective equipment. The airline has also taken an active role to assist the Maltese government to distribute covid vaccines abroad. Last August the airline transported 40,000 vaccines and a similar number of rapid testing kits to Libya.

Air Malta has announced its intention to resume flights between the Islands and London Gatwick, Madrid and Moscow Sheremetyevo Airport for Summer 2022.

London Gatwick Airport will be served with a daily service whilst Madrid and Moscow will be served three times per week and twice a week respectively.

These new services will start from March 27, 2022 and are part of a total of over 250 flights per week to 20 destinations which also includes 15 services per week to London Heathrow that Air Malta will operate to in summer 2022.

Welcome back 🤩 | #Malta Has Reopened 🇲🇹
As of today June 1, Malta eases more restrictions to welcome you again.
We are thrilled to have you back onboard with us, to fly you directly to our sunny shores, from 20 destinations. pic.twitter.com/art5cUcjH0

Air Malta continues to remain committed to its published Summer schedule and will be increasing its flights as planned in June. With added frequencies and the re-start of services to the European cities of Lisbon, Munich, Prague and Vienna, the Airline is planning to operate 51 return weekly flights to 15 destinations in June.

Air Malta today launched its summer flight schedule with a planned operation to 20 cities. During the six-month program (covering May till October 2021), the Airline is committed to operate 3,012 flights and will offer for sale over half a million seats.

Key highlights during peak season include:

• Up to 10 weekly services on London Heathrow.

• Twice weekly services to Manchester, supporting the Midlands and North of the UK.

• Up to 11 weekly services on Charles de Gaulle and Orly airports in Paris.

• Up to 9 weekly services on Catania.

• Rome, Munich, and Vienna all served up to 5 times weekly.

Air Malta has today launched its Winter 20/21 flight schedule covering 21 destinations with 156 flights a week. The Airline gave a commitment that it will operate at least 50% of this schedule whilst continuing to waive rebooking fees if customers wish to change their booked flights for any reason.

To guarantee peace of mind and ensure reliability during these uncertain and testing times, Air Malta announced a ‘minimum guaranteed flight schedule’ to at least 15 destinations with 82 weekly flights.

“In view of the constant change in scenario, the Winter 20/21 Flight Schedule will be done differently this year to give peace of mind for the client that might remain stranded due to cancellation of flight. Through the Business Guaranteed will ensure the operation of a network defined on the passengers and cargo movements in any case when legally possible. During the winter schedule there will be 156 flights a week, 50% of which are business guaranteed. This will guarantee access to major airport hubs irrespective of any cancellations”, explained Minister Schembri.

Minister Schembri launched also Air Malta’s Flexibility Guaranteed stamp through which the airline will give additional booking flexibility for clients to benefit from an improved customer experience through the upgrades implemented in the online portal. “Air Malta is also working to ensure that through more operational efficiency it would be able to offer more competitive fares some starting from €29 this winter”, said Schembri.

Minister Schembri said that recent times have clearly shown, now more than ever, the importance for a small country like Malta to have its own national airline, which ultimately, despite the circumstances, ensured connectivity with the rest of the world.

“The global Covid-19 pandemic has disrupted travel in unprecedented ways. Rightfully, airlines around the world reduced capacity to match the dramatic decrease in demand. This added another layer of complexity for Island states like Malta that depend on air travel for their