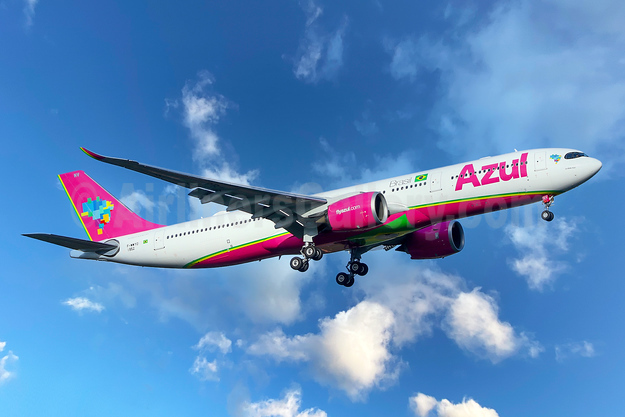 Azul, the largest airline in Brazil in terms of destinations and departures updates the market on its codeshare with LATAM and possible industry consolidation.

“The codeshare with LATAM was a unique solution in our pandemic response.  We also realized that industry consolidation would be important for the post-pandemic recovery and Azul would be a key part of any such activity.  At the end of the first quarter of 2021 we hired financial advisors and are actively exploring consolidation opportunities.  We believe the cancelation of the codeshare by LATAM is a reaction to that process,” says John Rodgerson, CEO of Azul.  “Azul is emerging from this crisis in a leadership position in terms of liquidity, network recovery and competitive advantages.  Our plans are unchanged and I am confident that we are in the best position to pursue strategic alternatives at this point in time,” says Rodgerson.

Azul will keep the market update of any developments.

Azul Linhas Aéreas Brasileiras has painted a “Blue Macaw” tropical livery on one of its new Embraer 195-E2 jets (PS-AEF).

Azul just revealed one of its new E195-E2s in a striking tropical livery. Designed by São Paulo graffiti artist Luiz Pardal, the big E2 features 3 ararinhas (Spix’s macaws) on each side of the 41.5m fuselage. The aircraft is christened “Ararinha Azul.” The native bird was considered extinct for more than 20 years, but several were recently discovered in captivity.

The livery has 58 non-corrosive paint colors of which 28 are specially blended to capture the vibrant look of Brazil’s tropical landscape. The work was completed over 10 days at Embraer’s facility in São José dos Campos. Although it may appear to be painted by hand, the process involved masking the aircraft and then applying 150 kilos of paint using automated robots. Azul commissioned AzkoNobel and Tintas Coral, a Brazilian paint company, for the project. Despite the complexity of colors, the overall weight of paint used for this design is about the same as more conventional liveries. The paint is extremely durable and is designed to withstand forces that typically cause cracking – rain, cruise speed, air pressure changes, and takeoffs and landings.

When you spot the airplane at an airport, look carefully for the sparrow at the back of the fuselage. It’s Luiz Pardal’s signature mark. The word “pardal” means “sparrow” in English.

Azul S.A. has announced that it reached an agreement with Embraer to defer 59 E2s deliveries, expected to take place between 2020 and 2023, to 2024 and beyond. These aircraft have a list price of R$24.5 billion.

Azul has acted very swiftly in adapting its business to the COVID-19 crisis. It adjusted its capacity to the new demand environment by reducing it by 90% in the month of April compared to 2019. It also made headcount and salary changes which allowed the Company to reduce payroll costs by over 50% compared to the similar period last year.

“Azul entered this crisis as one of the most profitable airlines in the world. The impact of the pandemic on the Brazilian and global economy has been unprecedented, and the timing of the recovery still remains uncertain. With the contribution of all of our stakeholders, we believe we will be able to come out of this crisis as an even stronger company. The agreement reached with Embraer to defer aircraft deliveries to 2024 is one important component of our comprehensive plan that allows us to create the liquidity runway for this crisis. With this support, we are able to ensure that we have the liquidity and the resources required to optimize the airline for the future,” said John Rodgerson, Azul’s CEO.

The Company continues to work with its partners on its fleet optimization plan and will keep the market informed of further developments.

Azul S.A., has announced that in response to the economic impact following the outbreak of COVID-19 in Brazil, the company is taking additional steps to preserve its financial position.

“While our top priority remains the health and safety of our crewmembers and customers, we continue to focus on adjusting capacity to demand and preserving our cash position during this challenging time. We ended 2019 as one of the most profitable airlines in the world. Our strong liquidity position, combined with the expertise and dedication of our team give me confidence that we will come out of this crisis a lot stronger as an airline”, said John Rodgerson, CEO of Azul.

We are reducing consolidated capacity by 20%-25% in March and by 35% to 50% in April and beyond until the situation normalizes. As of March 16th, all international flights, except flights leaving from Campinas, will be suspended.

The company will continue to monitor demand trends on a daily basis adjusting capacity and its network as needed and will keep the market updated on further developments.

In addition to flight cancelations, Azul is taking several measures to reduce its fixed costs, which represent approximately 40% of total operating cost.

Azul S.A., the largest airline in Brazil by number cities served and flight departures, announces today its updated fleet plan. This updated forecast reflects an acceleration of the Company’s fleet transformation strategy, resulting in 100% of Azul’s domestic jet capacity coming from next-generation aircraft by 2022. As a result, Azul will have one of the most fuel-efficient, profitable and environmentally-friendly fleets in the world.

According to John Rodgerson, CEO of Azul, “we ended 2019 with 42 next-generation aircraft and could not be more excited about the economics as well as the high-quality onboard experience they offer to our customers. The A320neos and E2s are the principal pillars in our goal to significantly increase revenue and earnings while we grow responsibly over the next five years.”

This fleet plan represents the expected number of each aircraft type we plan to operate over the next five years.  Azul has the flexibility to reduce or increase these numbers depending on market conditions.

Azul has made this announcement:

The statue of Liberty, Times Square and Central Park are now closer than ever for Azul customers with new daily service to JFK starting June 15, 2020.

New York will be Azul’s 3rd destination in the United States.  Azul already serves Fort Lauderdale/Hollywood and Orlando from Sao Paulo-Viracopos, Belo Horizonte and Recife.  With this new nonstop service, Azul’s portfolio of service to the US will increase to 30 weekly flights.  Sao Paulo-Viracopos, Azul’s primary hub in Brazil with this latest addition will now feature 60 nonstop destinations, 6 of those international: Fort Lauderdale, Orlando and JFK in the US, Lisbon and Porto in Portugal and finally Buenos Aires in Argentina.

This route will be served by Azul’s Airbus A330 widebody aircraft.

The flight will operate out of the international terminal at Sao Paulo-Viracopos airport and at JFK will operate out of Jetblue’s Terminal T5.  Flights are timed to provide fast and convenient connections important destinations Boston in the US and Rio de Janeiro in Brazil.

The table below shows the scheduled departure and arrival times (all times local):

Belo Horizonte has a new international destination. Starting today, December 16, there will be direct flights from Minas Gerais three times a week to Fort Lauderdale/Hollywood in the United States. These flights on the Airbus A330, with capacity for up to 272 passengers, will last an average of eight and one-half hours.

With a full plane, the first flight out of the capital city to Fort Lauderdale/Hollywood took off right after 1:00 p.m. Prior to that, representatives from the government, the Belo Horizonte Airport, and Azul made speeches in the international departures area, celebrating the start of operations from Belo Horizonte to yet another international destination. Azul now serves both Fort Lauderdale and Orlando, expanding the frequency of its flights between Minas Gerais and the US to six flights per week.

As Azul’s second-largest hub in Brazil, with the new connection Belo Horizonte now has a daily average of 90 connections to 38 destinations, three of which are international: Orlando and Fort Lauderdale in the United States, and Buenos Aires in Argentina. Jason Ward, Vice President of Azul’s People and Clients Division, highlighted the stronger profile of the company in the capital city, and reinforced the importance of Belo Horizonte in the company’s domestic and international network.

Cities in the interior of Minas Gerais, especially Ipatinga, Uberlândia, Montes Claros and Uberaba, as well as Rio de Janeiro (Santos Dumont and Galeão), Brasília, Goiânia, Salvador and Vitória, will be the main Brazilian cities with convenient connections to the new Belo Horizonte–Fort Lauderdaleflight. In less than nine hours, clients from these regions can take off from Belo Horizonte and land in North America. Additionally, in Fort Lauderdale, Azul, in partnership with United and JetBlue, will offer connections to destinations operated by its partner companies.

Alitalia has signed a codeshare agreement with Azul Brazilian Airlines, the largest airline in Brazil by number of cities served.

As part of this agreement, customers can conveniently connect to Azul’s unrivaled domestic network when flying Alitalia into and out of São Paulo (Guarulhos) and Rio de Janeiro (Galeão).

The benefits and convenience of a codeshare ticket include those of thru check-in and thru-baggage.

In other news, Alitalia will start a new route from Milan (Linate) to Hamburg starting on March 29, 2020.