Air Deccan has received its scheduled commuter operator (SCO) permit from DGCA. As a result, the reborn carrier will relaunch regional operations in India on December 23, 2017 under the UDAN program.

According to the airline;

“UDAN (Ude Desh ka Aam Naagrik)- is a breakthrough initiative by the government of India that will be transformative on a societal scale, improving the economic landscape of the region. The objective of Regional Connectivity Scheme is to make flying affordable for the masses, to promote tourism, increase employment and promote balanced regional growth.  It also intends to put life into un-served and under -served airports.

We at Deccan, share the same vision to ‘connect every part of the country by affordable air transport’ and under the first phase will connect over 34 routes spread across the country with the Beechcraft 1900D aircraft

The airline will operate three 18-seat Beechcraft 1900D aircraft on these regional routes.

In 2003 Air Deccan started by Capt G R Gopinath gave wings to the nation’s dream to fly by becoming India’s first low cost carrier. In little over 4 years it expanded rapidly opening up over 30 new airports in the country and by 2007 was flying to over 70 destinations with 45+ aircraft.

Today Air Deccan unit of Deccan Charters has re-launched with an aim of augmenting the government’s UDAN Regional Connectivity scheme, an ambitious program of connecting Tier II & Tier III cities to the nation’s map. This laudable undertaking of the Government of India will usher in a new sustainable air revolution giving wings to the aspirations of the common man to affordable flying.

Through this service, Air Deccan will connect emerging towns across various states of India like Assam, Delhi, Himachal Pradesh, Punjab, Jharkhand, Maharashtra, Meghalaya, Mizoram, Tripura, Uttar Pradesh, Uttarakhand and West Bengal in the current first phase to the metros like New Delhi, Mumbai & Kolkata, thereby shortening the travel time from 5-6 hours to under an hour at an affordable price, thereby increasing travel options.” 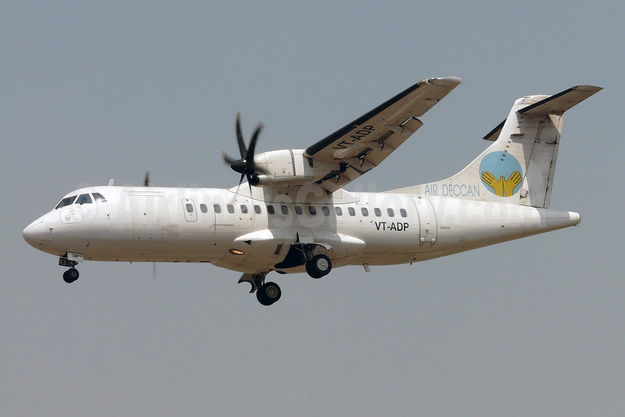 Air Deccan is planning to relaunch operations this month with rock bottom fares according to Mint. The first route is from Mumbai to Nashik.

The history of the airline as told by company:

Air Deccan was a wholly owned subsidiary of Deccan Aviation. It was started by Captain G. R. Gopinath as India’s first low-cost carrier and its first flight took off on August 23, 2003 from Bangalore to Hubli. It was known popularly as the common man’s airline, with is logo showing two palms joined together to signify a bird flying. The tagline of the airline was “Simpli-fly,” signifying that it was now possible for the common man to fly. The dream of Captain Gopinath was to enable “every Indian to fly at least once in his lifetime.” Air Deccan was the first airline in India to fly to second tier cities like Hubballi, Mangalore, Madurai and Visakhapatnam from metropolitan areas like Bangalore and Chennai. Air Deccan’s phenomenal growth spurred the entry of more than half a dozen low-cost air carriers in India. Later, as Kingfisher Red, the airline faced stiff competition from SpiceJet, IndiGo Airlines, Jet Lite and GoAir. The growth of these low-cost air carriers has also forced mainstream domestic Indian airlines to lower their fares. 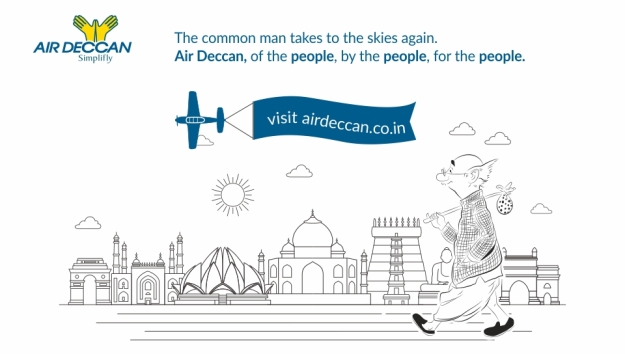 The “Less than expected” growth in the Indian aviation sector coupled with overcrowding and the resultant severe competition between airlines resulted in almost all the Indian carriers, including Air Deccan, running into heavy losses. After initially trying to get in fresh capital for running the airline, Captain Gopinath eventually succumbed to pressures for consolidation. On December 19, 2007, it was announced that Air Deccan would merge with Kingfisher Airlines. Since Indian aviation regulations prohibited domestic airlines from flying on international routes until they had operated in the domestic market for five years, it was decided to instead merge Kingfisher Airlines into Deccan Aviation, following which Deccan Aviation would be renamed Kingfisher Airlines. This was because Air Deccan was the older of the two airlines, and therefore would be the first to qualify for flying on international routes. The merger became effective April 2008, with Vijay Mallya becoming the chairman and CEO of the new company, while G. R. Gopinath became its Vice-Chairman. Kingfisher Airlines’ parent company United Breweries Group acquired a 26 percent stake in Air Deccan’s parent company Deccan Aviation. The combined fleet of 71 Airbus A320 family and ATR aircraft operated 537 flights to 69 Indian cities taking advantage of synergy benefits arising from a common fleet of aircraft that improved financial prospects for both carriers. Kingfisher Airlines continued to serve the corporate and business travel segment while Air Deccan focused on serving the low-fare segment.

In October 2007, after the acquisition by Kingfisher Airlines, Air Deccan was renamed “Simplifly Deccan” with its new tagline being “The choice is simple”. The old logo was replaced by the Kingfisher logo and the same font of Kingfisher Airlines was also used on Simplifly Deccan. The old yellow and blue colors of Air Deccan were replaced by Kingfisher Airlines’s red and white, supposedly to give the same premium look and feel to Deccan as well. The check-in counters at airports as well as the crew uniforms now had the same red and white colors as those for Kingfisher Airlines. The new look airline also promised excellent on-time performance, a wider network and “little delights all the way”. Check-in staff would no longer be outsourced, but managed by the airline’s own employees, to increase accountability and improve service delivery. Mr Mallya announced that the new airline would slowly phase out the ageing ATR 42 and A320 planes and replace them with new aircraft. Changes were also made in the flight schedule of Simplifly Deccan airlines to better align with that of Kingfisher Airlines. According to agencies, the re-branding was expected to cost around Rs 150 million (approximately $3.8m). After its merger, Air Deccan switched to the Sabre reservation system used by Kingfisher Airlines, thereby replacing the previous solution provided by Radixx. In August 2008, the airline announced further changes in its branding to Kingfisher Red and said that it will begin operating under Kingfisher IATA code IT.