Air Tahiti Nui made this announcement

Air Tahiti Nui check-in counters at Auckland International Airport sprung back into life on May 5 as the airline welcomed passengers back on board after a two-year hiatus.

Checking in to Air Tahiti Nui flight TN182 today took on a festive feel as the airline and passengers celebrated the opportunity to take to the skies again to experience the joy of travel. Likewise, inbound passengers from Papeete received the warmest of welcomes upon their arrival.

Air Tahiti Nui has re-entered the passenger market with highly competitive airfares, especially on its connecting Papeete – Los Angeles route. Daniel says, “We are holding our pre covid pricing for as long as we can to enable as many travelers as possible the opportunity to reconnect with some of their favorite destinations.”

The earlier re-opening of the international border for travel ex-New Zealand has been welcomed by the airline, which has been working tirelessly since the announcement to up weight the operational side of the business and reconnect with passengers.

Initially, Air Tahiti Nui will offer a weekly flight, extending to three flights a week during the high season from July 3 – to August 9, with seasonal adjustments after that.

The current schedules present travelers with an attractive stopover opportunity or short connection time for beyond Tahiti services to Los Angeles and Paris.

Alaska Airlines announced today that Air Tahiti Nui is our newest global airline partner – opening a world of adventure, fun and relaxation in the islands of Tahiti.

Beginning October 4, 2022, Air Tahiti Nui will begin new nonstop service between the hometown airport in Seattle/Tacoma and Papeete, the capital of French Polynesia located on its main island Tahiti. From there, the possibilities are endless for escapes to dozens of other nearby islands.

The flight is scheduled for 16 hours and 20 minutes and will remain the longest nonstop route in the world. It will again be operated with a Boeing 787-9 Dreamliner.

Air Tahiti Nui achieved an incredible new milestone in aviation history with the completion of a 15-hour and 45-minute non-stop domestic and international flight from Faa’a International Airport in Tahiti to Charles de Gaulle Airport in Paris, setting a new record for the world’s longest flight. The record-setting 9,765-mile journey on Air Tahiti Nui’s new Boeing 787-9 Tahitian Dreamliner was made possible by a crew of four pilots, next generation aircraft and eastbound tailwinds. The French Polynesian airline usually operates its Papeete to Paris route with a stopover in Los Angeles but due to travel restrictions affecting French travelers, the airline operated the flight non-stop, making world history.

“The health and safety of our passengers is always our first priority. With flight path challenges given the current global travel restrictions, we made the decision to operate our Papeete to Paris route as a nonstop flight in order to get our passengers safely home,” said Nicholas Panza, Vice President, Americas at Air Tahiti Nui. We are honored that in flying our new Boeing 787-9 Tahitian Dreamliner nonstop to Paris, we simultaneously made history for achieving the world’s longest domestic and international flight.”

Air Tahiti Nui’s new Boeing 787-9 Tahitian Dreamliners have completely replaced the airline’s previous fleet. The new aircrafts are exceptionally passenger-centric boasting cleaner air with an upgraded purification system, 80 percent larger windows and lower pressure paired with better humidity. They are equipped with HEPA (High Efficiency Particulate Air) filters, which remove 99.97 percent of contaminants from the cabin air. The airline’s new Moana Premium Economy Class offers a luxurious upgrade. Set in a 2x3x2 formation, these larger seats with more legroom offer an elevated experience, from the redesigned livery to the many benefits and amenities, designed to provide a culturally immersive experience for passengers from the moment they approach the plane to the moment they arrive in their destination.

With these updated uniforms, Air Tahiti Nui brings even more color into their award-winning Tahitian Dreamliners, drawing inspiration from the vivid colors used by famed painter, Paul Gaugin. The bright outfits paired with the ocean-inspired coloring of the cabin will coalesce into a sense of already being on the tropical islands of French Polynesia before one even leaves the airport.

“As ambassadors of The Islands of Tahiti, it is important that every aspect of our Tahitian Dreamliners embody the destination,” said Nicholas Panza, Vice President of North America, Air Tahiti Nui. “Our goal is to provide a fully immersive passenger experience, from the moment passengers approach the plane to the moment they disembark, and the crew uniforms are an important part of this.”

The designers, Steeve Liu, known in Tahiti as “Steeve L,” and Moerani Morgrin, or “Moya B,” were tasked with creating uniforms for Air Tahiti Nui’s hostesses and stewards that met the professional requirements of an international airline, while still reflecting the charm, beauty and warmth that are typical of the islands. To do this, the designers created two separate outfits: a formal pre- and post-flight uniform and a less formal in-flight uniform.

The first and more formal uniform, worn by crew while outside the aircraft, features patterns of turquoise tropical foliage on a dark blue background, bringing a touch of exoticism to an outfit that is nevertheless meant to be strict and professional. The borders and red lapels, representing the Polynesian flag, highlight the more rigorous nature of this outfit.

The second uniform, worn by the crew while in-flight, are the fitted Purotu and flowing Mamaruau, popular dresses loved by the women of Polynesia. These dresses feature the vibrant reds, blues, yellows and pinks that were loved by Gauguin, boasting a pattern made of foliage and vanilla blossoms in three color schemes, either mauve on a turquoise background, black on a red background or pink on a yellow background. Adorned with laces and red piping, these dresses bring the vivid colors and tones that compose the beauty of Polynesian gardens into the cabin. Together, these two outfits distinguish the airline’s authenticity to its destination.

The uniforms meld seamlessly with the recent launch of the Tahitian Dreamliners. Each Dreamliner aircraft seats a total of 294 passengers onboard and offers three different seating options including Poerava Business, Moana Premium and Moana Economy. The Dreamliner fleet began operation in November 2018 on flights between Tahiti and Auckland, New Zealand and three times a week to Los Angeles.

Headquartered in Papeete, Tahiti, Air Tahiti Nui currently operates from its Tahiti base to destinations in 10 countries. The phasing out of the current Airbus A340-300 fleet will be completed by September 2019.  The airline has a number of codeshare partners including American Airlines, SNCF, Air Calin, Air New Zealand, Japan Airlines, Korean Air, Qantas and LATAM.

The brand new 294-seat Boeing 787-9 Dreamliner (above) replaces the previous Airbus A340-
300 which for many years flew the connection between Papeete and Paris CDG via Los Angeles.

About 300 guests, mostly from the European travel industry were invited on a preview flight from Paris.

Later the heading was north to Normandy, Bretagne until Brest then the down along the coast to Bordeaux and the mouth of the Gironde.

Continuing to Montpellier, Marseille, Toulon, Hyeres and part of the French Riviera, Provence, then overflying the eastern Alps and then back to Paris.

The Boeing 787-9 Dreamliner has a noise reduction of 60% compared to other aircraft.

The new Dreamliner has an avionics package that reduces turbulence by discovering areas in advance. It has an improved air purification system in the passenger cabin, flying at a lower pressurized altitude than the other aircraft.

Passengers will seem to be more rested with graduated LED lighting, which conceptually was invented as a therapy against stress generated by long distance flights.

On board there is a very high speed Wi-Fi connectivity. All screens are high definition image touch screens. Duty free can be booked on Tahiti-airstore.com directly from the place.

In 2017, Air Tahiti Nui carried almost half a million passengers, operating 1,631 commercial flights and nearly 18,000 flight hours, producing € 300 million in revenue and €17 million in profits. There are 800 employees.

We are thrilled to announce that our 2nd TahitianDreamliner will arrive at PPT today at 2:40 PM! Tupaia, our new blue bird, is just as beautiful as the first one! An inauguration ceremony is planned to celebrate its arrival. We can’t wait to see our aircraft landing in Tahiti.

The airline has announced on social media:

This year has been filled with novelties and emotions: new brand, new visual identity, new fleet and so many other projects. On this special day, we want to thank you for all the shared experiences. Together let’s make sure that the journey continues! 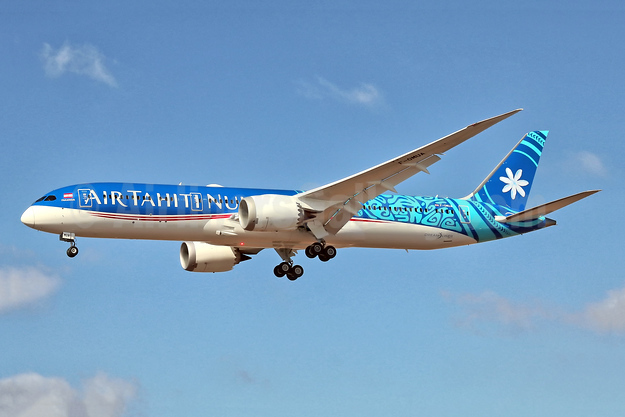 Our first Boeing 787-9 Dreamliner will operate its first commercial flight today. The departure from Papeete (PPT) will be on Wednesday, November 7 at 8:45 AM and will arrive in Auckland (AKL) on Thursday, November 8 at 01:05 PM.

The Presidential Delegation of Tahiti, Air Tahiti Nui head office and @Boeing celebrate the delivery of the first Tahitian Dreamliner in Charleston with our hostesses who brought a Polynesian touch with a beautiful dance performance!

Boeing later in the day issued this statement:

Boeing, Air Lease Corporation, and Air Tahiti Nui celebrated the delivery of the airline’s first 787-9 Dreamliner, via a lease from ALC. This is the first Boeing airplane to join the Tahitian airline, which plans to use the longest-range Dreamliner to replace aging Airbus A340s and connect its home base in the South Pacific with world capitals such as Paris, Tokyo and Los Angeles.

Air Tahiti Nui joins other carriers in the Pacific who operate long-distance routes in switching to the super-efficient and long-range 787-9. The airplane can fly up to 7,635 nautical miles (14,140 km), while reducing fuel use and emissions by 20 to 25 percent compared to older airplanes.

The airline announced in 2015 it would lease two 787s through ALC and purchase two 787s directly from Boeing as part of its plan to upgrade its fleet for the future.

The aircraft is leased from ALC. ALC issued this statement:

Air Lease Corporation on October 8, 2018 announced the delivery of the first of two new Boeing 787-9 aircraft on long-term lease to Air Tahiti Nui. This Dreamliner aircraft is from ALC’s order book with Boeing and is powered by GEnx-1B74/75 engines.

All photos above by Air Tahiti Nui.

Air Tahiti Nui has updated the progress of its first Boeing 787-9 Dreamliner (F-OMUA) “Fakarava” in its new 2018 livery on social media:

IaOraNa, F-OMUA Fakarava! Our beautiful @Boeing is ready! The Fakarava has rolled out of the paint hanger. It is registered with the letters “MUA”, which means “Go ahead” in Tahitian. We are pleased to present the result of 3 years of work to write a new chapter of our history!

All images by Air Tahiti Nui.

Previously the airline explained its new livery with the first Dreamliner:

As you will see in the design details of The Tahitian Dreamliner, we at Air Tahiti Nui believe each of us serves as an ambassador of our homeland.

As we chart our course of the next 20 years, the idea of Nui will be a shining star that guides us forward. We will challenge ourselves to examine every part of the travel experience we provide our guests to find ways to make it more relaxing, more immersive, and more “Nui.”

Our Dreamliner fleet begins a new chapter in our proud history of connecting Tahiti to the world. We’ve selected what we believe to be the best aircraft flying the skies, the Boeing 787-9, and we’ve made it uniquely Tahitian. Come fly with us and be among the first to be carried to your dream destination on the wings of our Dreamliner.