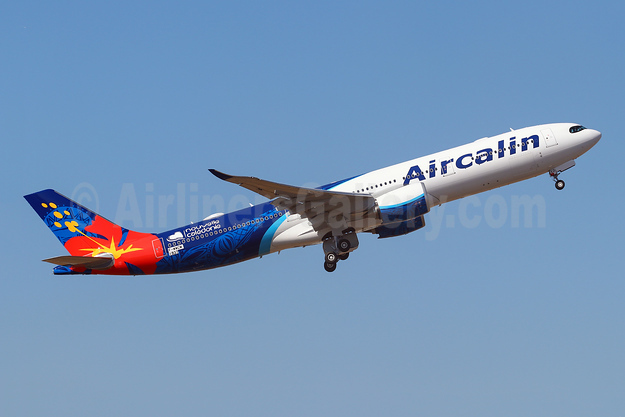 Aircalin will start flying Changi Airport in Singapore starting on July 1, 2022 with flights between Singapore and New Caledonia.

Aircalin’s A320neo is powered by Pratt & Whitney PW1000 engines and configured in a single class layout with 168 seats.

With the A320neo, Aircalin will be able to increase capacity on its flights and open new routes across the Pacific region.

Aircalin has taken delivery of its first of two Airbus A330-900 at a delivery ceremony in Toulouse, France, with the second aircraft joining the fleet later in 2019, replacing its existing two A330s. Aircalin is also a customer for the A320neo and will replace its existing two A320s to become an operator of two A330-900s and two A320neos.

Aircalin’s A330neos are configured in a comfortable three-class layout with 291 seats or 25 more seats than its existing smaller A330-200s. These include 26 business, 244 economy and for the first time, premium economy with 21 seats.

The A330neos will boost capacity and nonstop connectivity between the French Pacific Island territory and markets in Japan, Australia and the Pacific Islands nations, cutting fuel burn by 25% per seat (compared with previous generation competitors) and providing passengers with the latest standards in cabin comfort. These routes provide essential links to tourism as well as business traffic, which are essential to the New Caledonia economy.

Aircalin (Noumea) announced this new look on July 1, 2014. The first aircraft with the new look is the pictured Airbus A320-232 F-OZNC (msn 3547) arriving at Sydney. F-OZNC was leased from AerCap on July 16, 2014 and arrived in the islands in early August. The French registration is a combination of OZ (for Australia) and NC for New Caledonia where it mainly operates. The aircraft is now flying to Australia.

According to the airline, the “introduction of the heart-shaped logo was adopted by the three Provincial Tourism Boards. Seizing the opportunity offered by work on its new aircraft, Aircalin decided to revisit and refresh its livery design.”

The airline continued, “The two A330 aircraft will be repainted one after another when they undergo their Heavy Maintenance Checks scheduled over the period from August 16 and October 28, 2014. And finally, in 2015, the second A320 will also undergo its Heavy Maintenance Check and emerge with the new livery design.”

Aircalin has chartered an Air Tahiti Nui Airbus 340 to replace the two A330s while they are undergoing maintenance.

According to Aircalin, Local PR and communications agency White Rabbit created the livery concept in line with rigorous specifications laid down by Aircalin: “To complement our new cabins, we need to give our aircraft a powerful visual identity designed to encapsulate and project the essence of New Caledonia abroad and to strike a strong chord with New Caledonians.”

International Lease Finance Corporation (ILFC), a wholly owned subsidiary of American International Group, Inc., announced it has signed an agreement with Air Calédonie International (Aircalin) (Nouméa), New Caledonia’s international airline, for the lease of a used Airbus A320-200. The aircraft will support the airline’s efforts to meet growing demand for air travel in the region.

The aircraft is scheduled for delivery in the middle of 2014 and will mark the addition of the second Airbus A320 to the airline’s fleet. The aircraft will be equipped with IAE V2500 engines and configured to have 8 business and 150 economy class seats. It will operate on Aircalin’s regional network, which connects its Nouméa base in New Caledonia with Japan, Australia, New Zealand and major South Pacific Islands.

Copyright Photo: John Adlard/AirlinersGallery.com. The current Airbus A320, the pictured A320-232 F-OJSB (msn 2152) is pictured at Sydney.

Czech Airlines-CSA (Prague) is operating its Airbus A320-214 OK-GEB (msn 1450) on a dry lease to Aircalin-Air Caledonie International (Noumea).