Bahrain Air (Bahrain) has suddenly ceased all operations. The airline declared voluntary bankruptcy and filed for liquidation on February 12, 2013. The airline operated a few days over five years and operated two Airbus A319s and two A320s. Bahrain Air was hurt badly by the previous Arab Spring demonstrations in Bahrain. The airline issued the following statement:

Statement from the Board of Directors of Bahrain Air

“Bahrain Air held an Extraordinary General Meeting today (February 12) at which the shareholders made the decision to announce the company’s immediate suspension of operations and to file for voluntary liquidation in accordance with the Kingdom of Bahrain’s Commercial Companies Law.

The company sustained considerable financial losses as a result of the unstable political and security situation in Bahrain. In 2011, during Bahrain’s State of National Emergency, the airline was instructed to suspend flights to several destinations, and also suffered from the lack of traffic to and from Bahrain, and from the restrictions on the Saudi Causeway. Despite the Royal Decree number 18 for 2011 Article 5/10 regulating land, sea and air transportation during Bahrain’s State of National safety which states that all affected parties will be fairly compensated, the airline, despite making official claims, has received no compensation.

The airline is now being required to make immediate payments on past government debts or face closure at the same time as having its scheduled operations, both destinations and frequencies, being reduced considerably by the Civil Aviation Affairs in the Ministry of Transportation. This effectively strangles the airline by simultaneously requesting payments and reducing its ability to generate the necessary revenues both to make these payments and to sustain long term profitability. The shareholders of the company have spared no effort to support the airline financially since its inception and to support the airline and Bahrain through the unrest in 2011. The airline has also spared no effort to negotiate a solution with the Minister of Transportation (who is also an active board member of Gulf Air). However, he has shown no inclination to provide a meaningful solution. His decisions to restrict route approvals have cost the airline BD 4.5 million in lost revenues over the last 3 months.  The position of the Minister was made clear when, during a time of negotiation, he only extended the company’s AOC, after operational audits had been passed, for two months instead of one year. After meetings, the latest company proposal was forwarded last Thursday 7th February. During the EGM, a very negative response was received providing only minor route concessions in return for payments of over BD 4 million. In the circumstances, given the position of the Minister, the shareholders decided that had no option but to discontinue financial support and put the company into voluntary liquidation.

Today (February 12) is a sad day for all Bahrain Air shareholders and employees, and for our loyal and valued guests, and all those who valued the  freedom of choice when making their travel plans. We also helped promote Bahrain as a business and leisure destination and Bahrain International Airport as a passenger hub in line with the Kingdom’s Economic Vision 2030.  In doing so, we have demonstrated that it is possible to provide high quality and reliable scheduled airline services a fraction of the costs achieved by state airlines if fair practices and equal opportunities are rendered. We have created a proud legacy, with one of the best records for on time performance and value for money in the region. Finally, we would like to thank our staff for their hard working and lasting devotion to the cause of Bahrain Air.” 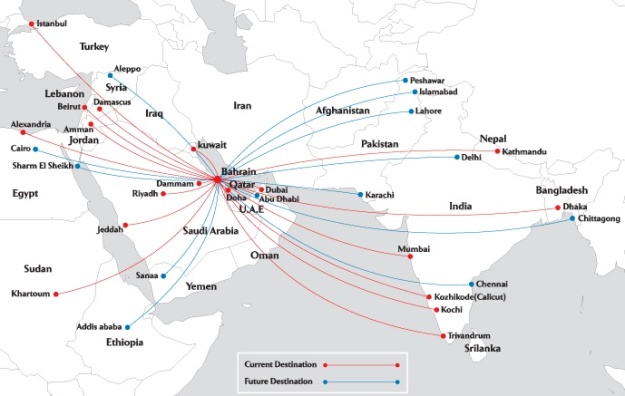 Bahrain Air (Bahrain) has announced it is opening a new hub in Dammam in the Kingdom of Saudi Arabia. Bahrain Air will operate nonstop flights from Dammam’s King Fahad International Airport to Beirut and Khartoum starting on June 13, 2012.

Bahrain Air (Bahrain) on March 15 launched four flights a week to Trivandrum, with plans to increase the new route to daily service by the summer.

The new flights to Trivandrum in the State of Kerala in southern India constitute 80% of Bahrain Air’s Indian capacity, with 17 flights a week to Cochin, Calicut and now Trivandrum. Flights will depart from Bahrain at 9.25 p.m. (2125) and arrive early morning in Trivandrum International airport at 4.15 a.m. (0415). The return flight will depart Trivandrum at 5.00 a.m. (0500) and arrive at Bahrain International Airport at 7.30 a.m. (0730). 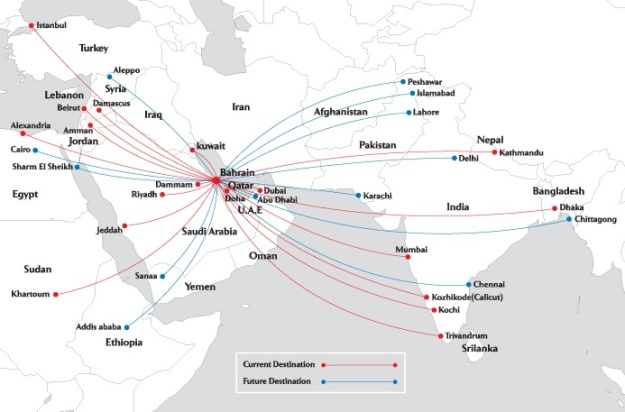 Copyright Photo: Ole Simon. Please click on the photo for additional details on the carrier.

Current Route Map (click on the map to make it larger):

Bahrain Air (Bahrain) will add Kathmandu, Nepal and the Bahrain-Kathmandu route on March 3.  The new route will be flown three times a week with Airbus A319 equipment.