China Express Airlines and Commercial Aircraft Corporation of China, Ltd. (COMAC) held a signing ceremony of 100 China-made commercial aircraft and delivery ceremony of the first ARJ21 aircraft in Chongqing on November 10, 2020. An ARJ21 aircraft with a fuselage painting of “China Express Tongcheng” and a nationality registration number of B-650P landed smoothly at Chongqing Jiangbei International Airport in that morning. This indicates that ARJ21 aircraft has officially joined in the fleet of China Express which has focused on regional aviation operation in China for a long term, the number of operators of the China-made commercial aircraft is increased to seven, and the regional aviation network in China will be further enriched to promote the popularized development of the civil aviation industry.

At the beginning of this month, China Express and COMAC officially have signed a purchase contract for 100 aircrafts, of which 50 are ARJ21 series aircraft, and the other 50 can be ARJ21 series aircraft or C919 series aircraft, which will be determined by subsequent negotiations between both sides. This signing and delivery means that ARJ21 aircraft has gained more recognition from customers after more than four years of market-oriented operation.

Since its establishment in 2006, China Express has always clearly adhered to the strategic positioning of regional aviation, and has been committed to the exploration and development of the regional aviation market in China. After more than ten years of operation, it has established operating bases in Guiyang, Chongqing, Dalian, Hohhot, Xi’an and other cities as well as Xinjiang Uygur Autonomous Region, and operated 165 routes, of which regional routes account for more than 95%. After joining in, ARJ21 aircraft will further supplement the regional aircraft transport capacity of China Express and improve the overall route network layout; and the mature regional route operation experience of China Express will also promote ARJ21 aircraft to set up a brand and create benefits.

The first ARJ21 aircraft of China Express, with a nationality registration number of B-650P, was parked on the apron on November 10, 2020. 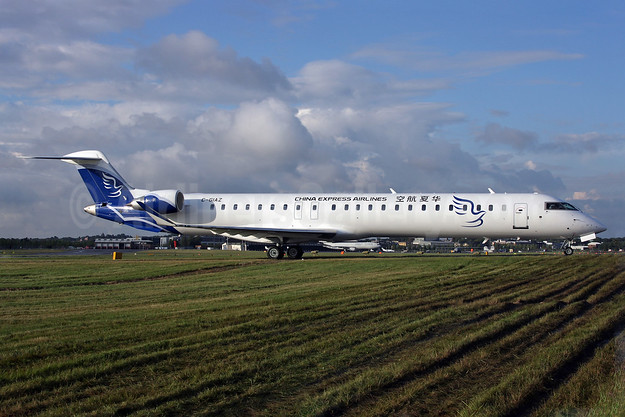 Based on the list price of the CRJ900 aircraft, the order announced today is valued at approximately $462.6 million US.

China Express Airlines (Guiyang, Guizhou) is the previously announced unidentified customer that had placed a firm order for 16 Bombardier CRJ900 NextGen regional jets and had taken options for eight additional airliners of the same type. This purchase agreement was initially announced on June 30, 2014.

China Express provides regional passenger services to 44 cities throughout China with its fleet of five Bombardier CRJ200 aircraft and nine 84-seat CRJ900 NextGen aircraft. The airline was the first to operate the CRJ900 aircraft in China.

China Express Airlines (Giuyang) is getting ready to take delivery of its first Bombardier CRJ900 (CL-600-2D24). Bombardier has brought this brand new jetliner to Farnborough Airshow prior to the official handover.

China Express Airlines (Guiyang) was forced by the CAAC to suspend operations on August 25 following an incident where the right wing of one of its CRJ200s scraped the runway on landing at Guiyang Airport. The airline commenced operations in September 2006.

Read the full report from ATW: