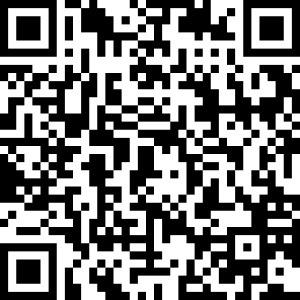 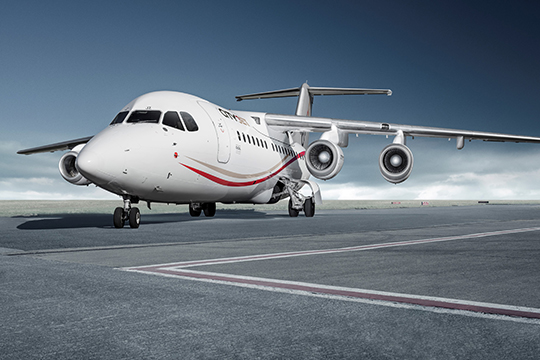 CityJet has requested protection from the Irish High Court from its creditors in an attempt to survive. Its fleet has been grounded by the COVID-19 crisis. The High Court has now appointed an interim examiner to oversee the finances of the company.

The action came after Brussels Airlines cancelled its wet lease contract with CityJet for five aircraft in the wake of the Coronavirus pandemic.

CityJet was established by entrepreneur Pat Byrne in 1993, CityJet pioneered services between Dublin and London City Airport in January 1994 under a franchise agreement with Virgin Atlantic Airways. 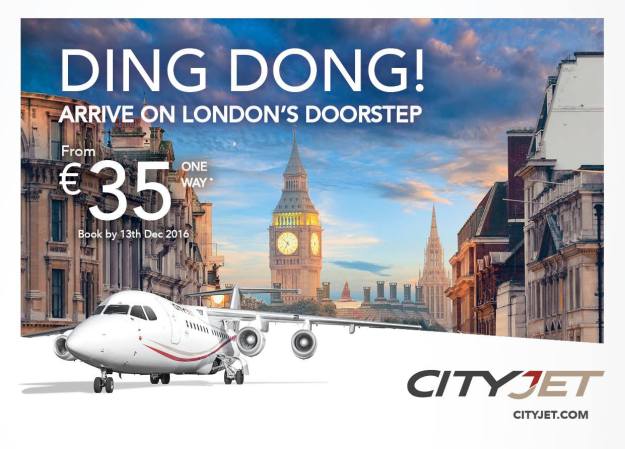 CityJet formed a partnership with Air France in 1996, which eventually transferred into Air France ownership in 2000. Much of CityJet services were then operated under the Air France brand.

CityJet continued to develop its role as a key airline in the London City market in addition to growing its network connecting European cities to the Air France hub in Paris. During this time, CityJet also acquired VLM, a Belgian airline, which also specialized in London City services. The airline was subsequently purchased by a business consortium led by its original founder, Pat Byrne, and has embarked on a major programme of expansion and strategic development since.

Under its new ownership, CityJet rebranded in 2015 with a refined livery, reflecting its newly-independent spirit and dedication to passenger service and quality.

CityJet has continued to undergo significant advancement since. In recent years CityJet secured a new wet lease contract (where it provides crew, aircraft, maintenance and operational services) to SAS. It operates a modern fleet of Bombardier CRJ900 passenger aircraft in the Nordic region and Scandanavia. As part of this project, CityJet purchased Finnish airline Blue1. CityJet also purchased another regional carrier, Cimber, operating mainly from Denmark.

In recent years, CityJet has refocused its activities to becoming a provider of “wet lease” services to major airlines, whereby it provides service on an aircraft, crew, maintenance and insurance (ACMI) basis to fly on behalf of its customer airlines. CityJet now has over 30 aircraft on wet lease to airlines across Europe, including Aer Lingus, Air France, Brussels Airlines, Hop! and SAS (Scandinavian Airlines), flying over 1,500 flights with 100,000 passengers per week for our customer airlines. All photos by CityJet.

The European Commission has approved the merge of Air Nostrum of Spain and CityJet of Ireland. The EC issued this statement:

The European Commission has approved, under the EU Merger Regulation, the creation of a joint venture between Fortress Investment Group, of the US, and Air Investment Valencia, of Spain. It will combine the activities of CityJet of Ireland and of Air Nostrum of Spain.

Air Investment Valencia, through a subsidiary, is active, among other things, as aircraft dry lessor and provider of fleet supply services to air operators. It is also active in the operation of air routes between Europe and Africa, mainly through charter flight and wet-lease services.

The activities of CityJet and Air Nostrum overlap in the provision of wet-leasing services to airlines and charter flights. The Commission concluded that the proposed transaction would raise no competition concerns, because the companies have moderate market shares, a sufficient number of competitors remains on the market and the barriers to entry are low. The transaction was examined under the normal merger review procedure.

Previously the two airlines issued this statement of intent:

Air Nostrum, who employs 1,450 people, is especially well known as the Regional Operator for Iberia under a longstanding franchise agreement flying to more than 60 destinations within Europe and Africa, with a fleet of 50 aircraft, including 30 Bombardier CRJ1000 regional jets. Air Nostrum is also active on wet lease services for customers across Europe, including Lufthansa, SAS, Binter or Croatian Airlines.

CityJet employs 1,250 people across 9 European countries and operates an extensive regional network of services under wet lease contracts with Air France, Brussels Airlines and SAS with a fleet of over 40 aircraft based in nine locations across Europe. This fleet includes 22 new Bombardier CRJ900 regional jets acquired specifically for wet lease services.

The two airlines are coincidentally of very similar age, having been founded in 1993 (CityJet) and 1994 (Air Nostrum), both now being close to their 25th year of operation.

Air Antwerp (Antwerp) has been formed with the help of CityJet and KLM. CityJet will control 75% of the stock.

The new airline is going through the AOC process and hopes to serves at least three destinations from Antwerp Airport, including London (City) according to Travel Magazine of Belgium.

The new airline will start operations with one Fokker 50, hopefully later this year. 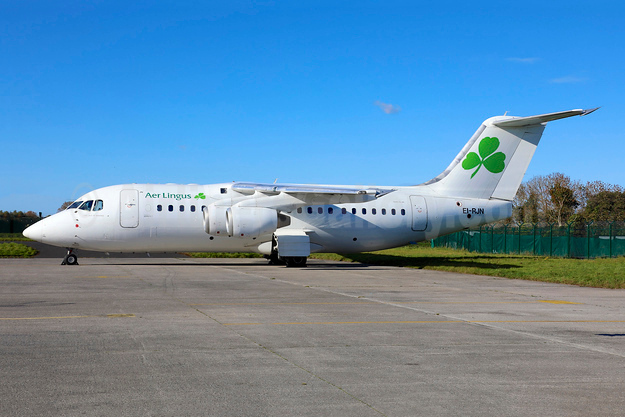 CityJet will operate two Avro (BAe) RJ85s (the pictured EI-RJN and EI-RJH) for Aer Lingus on the Dublin – London (City) route. The two aircraft will be leased for three years. 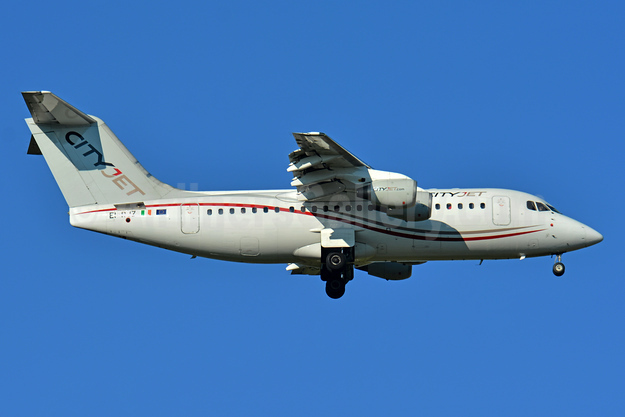 Starting on October 28, 2018, Aer Lingus will operate six daily round trips from Dublin to London City Airport on weekdays, with a reduced service on the weekend.

This new service will be in addition to the  current extensive services between Dublin and both London Heathrow and Gatwick airports.

The new route will be operated by CityJet for Aer Lingus. CityJet is planning to operate two RJ85s for Aer Lingus livery (as it was in the past).

CityJet also announced it will no longer operate flights under its own brand. CityJet issued this statement:

In recent years CityJet has transitioned from being an airline serving scheduled markets under its own brand to becoming a provider of capacity to customer airlines throughout Europe.

CityJet has announced that effective from October 27, 2018 it will no longer operate scheduled services marketed under its own brand.

Also announced, the company has entered a leasing arrangement between Aer Lingus and CityJet that will see CityJet provide two aircraft to Aer Lingus to operate the Dublin-London City route.  Commencing October 28, 2018, Aer Lingus will operate six daily round trips from Dublin to London City Airport on weekdays, with a reduced service at the weekend.

Air Nostrum and CityJet have announced that they have signed a Heads of Terms with the aim to bring about closer co-operation between the two airlines under the umbrella of a new holding company. Such a development will be subject to obtaining the requisite regulatory approvals and the preparation of the relevant filings has begun. 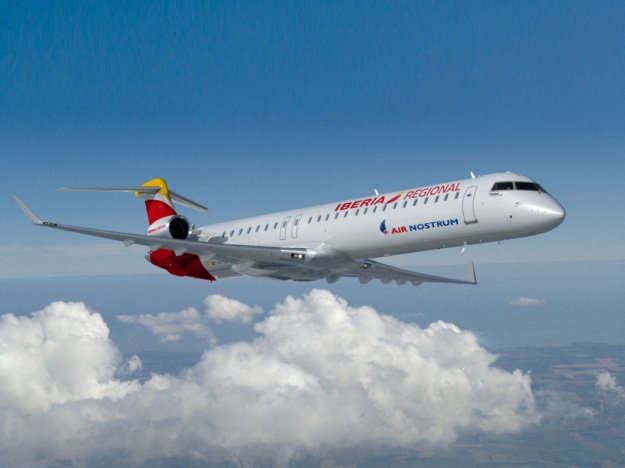 Air Nostrum, who employs 1,450 people, is especially well known as the Regional Operator for Iberia under a longstanding franchise agreement flying to more than 60 destinations within Europe and Africa, with a fleet of 50 aircraft, including 30 Bombardier CRJ1000 regional jets. Air Nostrum is also active on wet lease services for customers across Europe, including Lufthansa, SAS, Binter or Croatian Airlines.

CityJet employs 1,250 people across 9 European countries and operates an extensive regional network of services under wet lease contracts with Air France, Brussels Airlines and SAS with a fleet of over 40 aircraft based in nine locations across Europe. This fleet includes 22 new Bombardier CRJ900 regional jets acquired specifically for wet lease services.

The two airlines are coincidentally of very similar age, having been founded in 1993 (CityJet) and 1994 (Air Nostrum), both now being close to their 25th year of operation.

It is this combined span of experience that gives Air Nostrum and CityJet the enthusiasm and energy to move forward to consolidate their respective reservoirs of specialist knowledge and skilled resources into a single group pool of considerable depth.

Carlos Bertomeu, President of Air Nostrum said that ’’Europe is experiencing substantial expansion of wet lease contracts, otherwise known in North America as Capacity Purchase Agreements, as established airlines pursue a strategy of outsourcing their regional flying programmes. By CityJet and Air Nostrum finding a formula for combining their respective resources in terms of aircraft, crew and support services, this will undoubtedly result in a far more comprehensive and cost effective option for leading airlines in Europe to outsource their regional networks with confidence in the strength of this proposed new entity as an ideal partner for such activity’’.

Pat Byrne, CEO of CityJet said ‘’ There are so many things we have in common with Air Nostrum, especially the fact that we both operate large fleets of Bombardier CRJ 900 and CRJ 1000 aircraft which we believe is a robust and economic platform and ideal for wet lease contracts. Our combined fleets would represent a total fleet strength close to 100 aircraft. By coming together, we believe we will be in a position to respond to the specific needs of customer airlines through our flexibility in the provision of safe, dependable and quality assured operations. Our respective proven capacity and asset management expertise in acquiring aircraft for new wet lease contracts is also a significant added benefit we can provide to our airline customers.’’

The consolidated annual gross revenue of Air Nostrum and CityJet would be circa €700m, derived from a balanced and well spread portfolio of wet lease and franchise contracts throughout Europe. This makes for a very solid financial base in which prospective contracting airlines can have confidence in terms of the proposed new regional airline group’s capacity to deliver exceptional service on optimal economic terms.

CityJet, the Irish European regional airline, on May 24, 2016 took delivery in Italy of its first Superjet SSJ100 aircraft.

CityJet becomes the first European airline to operate the Superjet SSJ100. CityJet will lease 15 Superjet SSJ100 aircraft with an option for an additional 16.

Dublin-based CityJet operates from key airports in Europe, including London City Airport. The airline expects take delivery of three aircraft in 2016, with the remainder from 2017 onwards. The inaugural aircraft unveiled today is expected to be delivered to Dublin early in June with the second arriving in mid-June. The Superjet SSJ 100 achieved European Aviation Safety Agency (EASA) certification in 2012.

The CityJet aircraft is in the 98-seat configuration with an exclusive interior designed by Pininfarina, five abreast seating in a generous 32” seat pitch combining with a wider seat and cabin height of over 2m.

SuperJet International will also provide CityJet with the technical support through a SuperCare agreement for 12 years. CityJet crews are being trained at the Training Center in Venice.