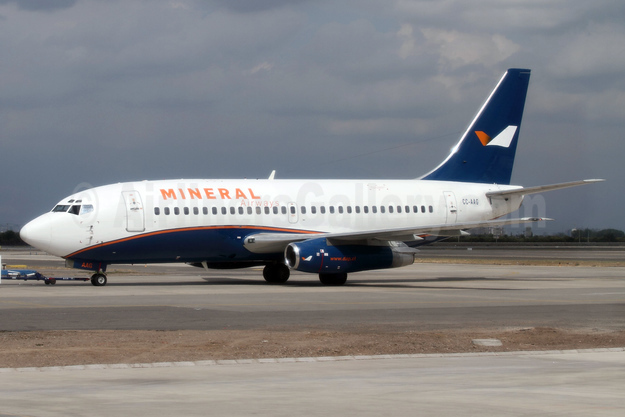 There a very few Boeing 737-200s still in airline passenger service. Now there is one less.

The Boeing 737-200s were mostly used for charter flights by mining companies, transporting personnel between Santiago and cities in northern Chile, and also carrying soccer/football teams and supporters to neighboring countries.

DAP will continue operating charters with its current fleet of BAe146/Avro RJ.

DAP Mineral Airways (the mining-related division of Aerovías DAP)  has begun using BAe (Avro) RJ85 OY-RCE (msn E2233) on January 10 2013 from Atlantic Airways (Faroe Islands). The aircraft has small Mineral Airways titles on the left front fuselage. The airline is operating from Santiago (SCL) to the Ricardo García Posada airfield of El Salvador in the northern part of Chile (SCES) as flight DAP 442.

OY-RCE made a test and certification flight on January 9 from SCL. The jetliner arrived in Chile on December 31 2012. The other two BAe 146-200 aircraft of Aerovias DAP are based in Punta Arenas (CC-CZP and CC-ACO), operating to Antarctica as DAP Antarctic Airways (Antarctica).
Aerovías DAP (Las Aerolíneas de la Patagonia) is based in Punta Arenas, in southern Chile.

Top Copyright Photo: Alvaro Romero. Pictured arriving at Santiago, Chile on January 10, 2013 is Atlantic Airways’ RJ85 OY-RCE about to land on runway 17L. OY-RCE is operating for the new DAP Mineral Airways arriving from El Salvador, Chile (SCES), as flight DAP 443. OY-RCE does not have the Mineral Airways titles on the right side of the fuselage.
Bottom Copyright Photos and Maps: Aerovias DAP.

Please click on the photo for the full size view.