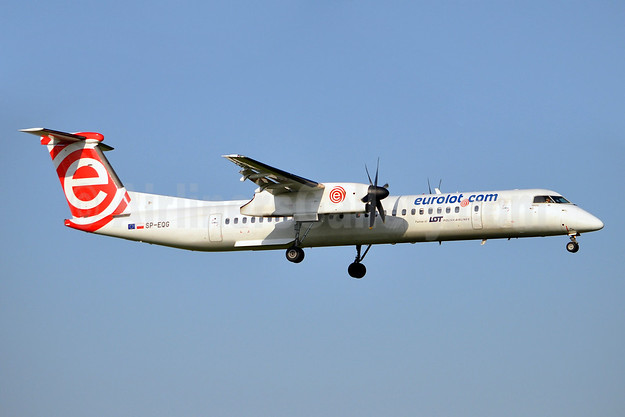 LOT Polish Airlines (Warsaw) flight LO 3924 from Kraków to Warsaw (Chopin) (WAW) on January 10, 2018 with the pictured Bombardier DHC-8-402 (Q400) SP-EQG landed safely on runway 11 at WAW. However the nose geared collapsed on landing, closing the runway and the airport. WAW was later reopened.

An emergency landing of the LOT’s aircraft Bombardier Q400 SP-EQG (LO 3924) occurred today at 19:19 p.m. local time at Warsaw Chopin Airport. All of 59 Passengers and 4 cabin crew members onboard are safe and have been taken care of immediately. The cause of the incident will be put through the detailed investigation. All Passengers of the canceled flights will be provided with a special care and re-accommodated accordingly.

At 11.15 p.m. Warsaw Chopin Airport has been opened and the traffic has been returning to normal. LOT’s flights previously redirected to other cities are gradually flying back to Warsaw.

EuroLOT (eurolot.com) (Warsaw) is giving up in its financial struggle. According to Radio Poland, the struggling airline is not taking any reservations past March 31.

According to report, the airline has been exploring its options for the past two months and concluded it could not make the company profitable. The state airline will be liquidated. The treasury of Poland controls 62.1 percent of the shares.

Since February 28, EuroLOT passengers can also fly to Milan from Gdansk Airport with stopovers in Lublin. The connection will be operated twice a week – on Fridays and Sundays.

Eurolot (eurolot.com) (Warsaw) has converted options on six Bombardier DHC-8-402s, marketed as the  Q400 NextGen airliners, to a firm order that will increase its fleet to 14 aircraft.

Including this transaction, Bombardier has booked firm orders for 460 Q400and Q400 NextGen turboprops,and delivered aircraft are in service with more than 40 operators in 33 countries, on six continents. These aircraft have transported more than 227 million passengers and have logged more than 3.5 million flight hours and over 3.8 million take-offs and landings.

Copyright Photo: Ton Jochems. The arrival of the Q400s spawned this updated 2012 livery which now features web titles and a reverse red and white tail logo.

Based on the list price for the Q400 NextGen airliner, the firm order contract is valued at approximately $246 million U.S. The contract value would increase to $625 million U.S. should all 12 options be converted to firm orders.

EuroLOT began operations on July 1, 1997 and currently operates a fleet of 14 aircraft serving both domestic and international destinations.

EuroLOT (Warsaw) has received permission from Poland’s treasury to acquire eight Bombardier DHC-8-402s (Q400s). The Q400s are expected to replace some of the existing ATR 42s and ATR 72s.

EuroLOT was established on December 19, 1996 and commenced scheduled operations on July 1, 1997. EuroLOT was established as a wholly owned subsidiary of LOT Polish Airlines. Currently its current main shareholder is the Polish State Treasury with 62.1% of the stock, while LOT retains 37.9%. It operates for its parent company.