The new airline has 23 additional copies on order. 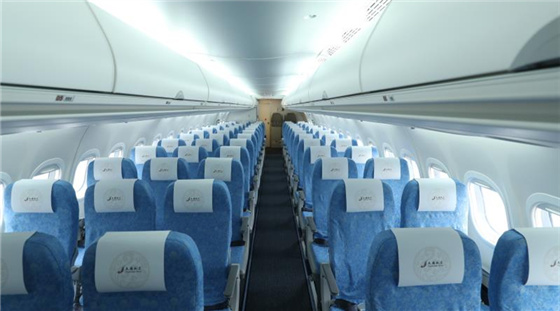 All photos by the airline and Comac.

ARJ21 aircraft with a nationality registration number of B-001R took off from Shanghai Dachang Airbase at 12:08 on February 22, 2019, and landed at Hohhot Baita International Airport of Inner Mongolia at 15:02 successfully after a flight of 2 hours and 54 minutes, which indicates the delivery of the first ARJ21 aircraft to Genghis Khan Airlines by Commercial Aircraft Corporation of China, Ltd. (COMAC). This delivery marks the start of a new journey for the commercial operation of the China-made jet, and means that ARJ21 aircraft will take Hohhot as the base to help improve the regional transport network of Inner Mongolia.

Genghis Khan Airlines was approved by Civil Aviation Administration of China (CAAC) to make preparations in March 2018. The establishment of Genghis Khan Airlines will help to make up for the shortage of infrastructure in Inner Mongolia and realize the interconnection and intercommunication between the regional feeder lines and branch lines, and between the feeder lines and general aviation network; is favorable to promoting the development of civil aviation industry of Inner Mongolia and boosting the economic transformation and upgrading of Inner Mongolia. Genghis Khan Airlines signed an aircraft purchase agreement with COMAC in October 2018 to determine the aircraft type of the fleet at the initial stage of operation.

According to the preparation requirements, after a lot of preparatory work, Genghis Khan Airlines has now obtained the Public Air Transport Operator’s Certificate, completed the training of the first batch of flight, dispatch, maintenance and other specialized personnel of ARJ21 aircraft, sent personnel to Harbin to learn the characteristics of ARJ21 aircraft winter operation, and made adequate preparations. After the first aircraft completes the verification flight and obtains the operation certificate, it will start operation officially, and Genghis Khan Airlines will gradually expand the scale of ARJ21 aircraft fleet, build relevant operation, guarantee, business and management systems, and make contributions to exploring the development mode of commercial aircraft in China, establishing the R&D and production system of commercial aircraft in China, and promoting the implementation of trunk liner program.

ARJ21 aircraft has excellent performance in high temperature, severe cold and plateau conditions, and especially could meet the requirements of take-off and landing at the airports in mid-western & north regions of China and obstacle clearance along complex routes. A total of 12 ARJ21 aircraft have been delivered to customers. So far, ARJ21 aircraft have accumulated more than 9,000 hours of safe operations and carried more than 270,000 passengers. On the basis of stable operation, COMAC has continued to optimize ARJ21 aircraft design based on customer demand, and continuously improve the market competitiveness of ARJ21 aircraft towards the goal of “easy manufacturing, easy maintenance and easy operation”.