Helvetic Airways made this announcement on social media:

We took delivery of our twelfth latest-generation Embraer E-Jet E2 aircraft yesterday (Sunday, August 15, 2021). The latest arrival, which bears the registration of HB-AZL touched down on Swiss soil at 17:07 (local time) yesterday. 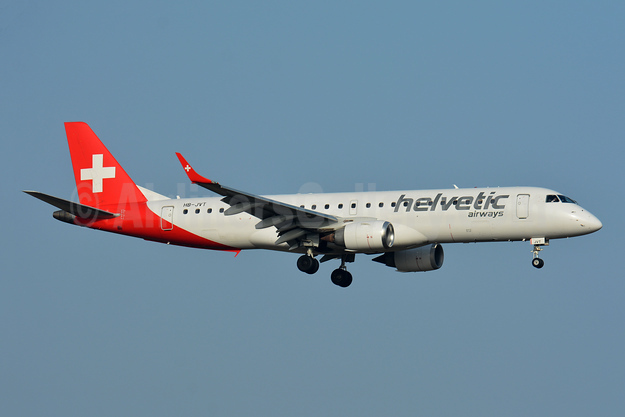 The event was a virtual affair, owing to the current coronavirus situation.

Helvetic Airways will serve Kos, Heraklion and Palma de Mallorca in this year’s peak summer season, in collaboration with tour operators Hotelplan Suisse and Universal. Flights will operate from Zurich and Bern between July and October.

The air transport sector remains severely affected by the present pandemic. Slow progress on the vaccination front, continued travel restrictions in Europe and a lack of clarity over the short – and medium-term future are not only delaying a return to normality, but are hindering airlines’ efforts to provide reliable flight programs. Despite the challenges, however, Helvetic Airways has teamed up with tour operator partners Hotelplan Suisse and Universal to offer an attractive selection of air services to Mediterranean leisure destinations for the summer months.

Focus on Greece and Spain

The Greek island of Kos will receive weekly Saturday charter flights from Zurich. The third biggest island in the Dodecanese Archipelago, Kos is famed for its villages, mountains, ancient ruins and magnificent beaches. Summer Saturday flights will also be offered to a second Greek destination: Heraklion. The capital of Crete, which is particularly renowned for i ts delightful Old Town, will be served from both Zurich and Bern.

Mallorca, one of Europe’s most popular vacation destinations, will be served every Sunday by Helvetic Airways over the summer months. Anyone seeking sun, sand, culture and good food will be well at home in Palma and its surrounds. Flights to this largest of the Balearic Islands will be offered from Zurich and Bern.

The services will be operated with Helvetic Airways’ Embraer E190-E2 aircraft. With its impressive low-noise and ecofriendly credentials, this state-of-the-art 110-seat twinjet is the flagship of the Helvetic Airways fleet.

In other news, Lufthansa Aviation Training (LAT) has put an Embraer E190-E2 full flight simulator into operation at its Zurich training location.

This has created the best conditions for LAT to expand its partnership with Helvetic Airways and other customers with a complete onsite solution for the training of flight and cabin crews. The simulator is operated by LAT Switzerland AG in cooperation with Flight Safety International (FSI) from Tulsa/Oklahoma. This includes the provision of the equipment by FSI and the provision of the training service by LAT Switzerland for a full flight simulator, a procedure trainer and an advanced doortrainer.

Eight E2 aircraft have now entered service with Helvetic Airways. Four more will follow by the end of the summer. Together with four remaining E1 aircraft, Helvetic Airways’ fleet will then comprise a total of 16 Embraer aircraft. Most recently, the Embraer E1 type replaced the Fokker 100 aircraft and has since already contributed to a 20% fuel saving per route.

The cooperation with Lufthansa Aviation Training in pilot training dates back to the integration of the Embraer E190 at Helvetic Airways in 2014. It includes an average of 1,500 hours of simulator time per year as well as the rental of training equipment in the area of so-called Emergency and Safety Equipment Training (ESET).

Helvetic Airways has signed a commitment with Embraer to convert four of their remaining firm orders to the larger E195-E2 aircraft. The original order, for 12 E190-E2s with purchase rights for a further 12, and conversion rights to E195-E2, was announced in September 2018.

Embraer has so far delivered five E190-E2s to Helvetic Airways, and all deliveries of the remaining seven aircraft, including the four E195-E2s, will be completed before the end of 2021, with the majority in the first half of 2021.

The remaining firm order for the seven aircraft to be delivered has a value of USD $480 million, based on current list prices. With all the purchase rights being exercised, the deal has a list price of USD 1.25 billion. In a move to diversify fleet capacity, Helvetic Airways will configure the E195-E2 with 134 seats in a single class layout, while their E190-E2s have 110 seats.

The new E195-E2 provides greater capacity, whilst being more sustainable and quiet; the E195-E2 burns 10% less fuel per flight, emits 30% less CO2 per passenger, and is 48% quieter than the E190 aircraft it replaces in Helvetic’s fleet.

The delivery of the 1,600th e-Jet to Helvetic Airways set a new distance record for an E-Jet.

Embraer celebrated on July 1, 2020 the delivery of its 1,600th E-Jet, an E190-E2. Helvetic Airways of Switzerland received the milestone aircraft. Airlines and leasing companies from some 50 countries have added Embraer E-Jets to their fleets since the first-generation jets entered revenue service in 2004. The new, highly fuel-efficient second-generation E-Jets family, the E2s, started flying with airlines in 2018.

Helvetic Airways is currently transitioning from a fleet of first-generation E-Jets to E2s. The carrier received its first E190-E2 in October 2019 and has added four more since as part of its fleet renewal program. Helvetic flies the airplanes in a 110-seat single-class configuration on domestic and international routes. The carrier has firm orders for 12 E190-E2s and purchase rights for a further 12 E190-E2s with conversion rights to the E195-E2, bringing the total potential order to 24 E2 aircraft.

FlyBAIR has announced it will launch scheduled passenger operations on May 2, 2020. The first route will be from Bern, Switzerland to Palma de Mallorca.

This will be followed by three other destinations also starting in May:

Helvetic Airways will operate its Embraer 190 aircraft for the new carrier in FlyBAIR markings.

Helvetic Airways on October 29 saw the arrival in Zurich of its new flagship, the first Embraer E190-E2, registered as HB-AZA.

HB-AZA arrived in ZRH to the traditional water cannon salute.

Embraer also made this announcement:

In ceremony held at its headquarters in Zurich, Switzerland, Helvetic Airways officially received its first E190-E2 jet from Embraer. The airline has a contract for a firm order of 12 jets of this model, and purchase rights for a further 12 E190-E2, with conversion rights to the E195-E2, bringing the total potential order up to 24 E-Jets E2s.

This E190-E2 aircraft marks the start of Helvetic’s fleet renewal program. The purchase rights for a further 12 aircraft (E190-E2 or E195-E2) will enable Helvetic Airways to grow according to market opportunities.

Helvetic Airways is configuring the E190-E2 in a single class layout with 110 seats and will deploy the aircraft on several domestic and international routes.

The E190-E2 brings more flexibility with maximum range of up to 3,293 miles (5,300 km), about 621 miles (1,000 km) more than the first-generation E190. The E190-E2 also generates significant savings for airlines in terms of maintenance costs. It has the longest maintenance intervals with 10,000 flight hours for basic checks and no calendar limit in typical E-Jets utilization. This means an additional 15 days of aircraft utilization over a period of ten years.

Pilots of the first-generation E-Jets require only two-and-a-half days of training without the need for a full flight simulator in order to fly the E2, which decreases the training burden and saves both time and money for the airlines. The E2 cockpit features advanced Honeywell Primus Epic 2 integrated avionics. Combined with the closed-loop fly-by-wire controls, the systems work together to improve aircraft performance, decrease pilot workload and enhance flight safety.

From the passenger’s perspective, the E2 cabin features a comfortable two-by-two layout. The absence of a middle seat enables passengers to have an enjoyable flight experience with more legroom and additional luggage storage space. Embraer is the world’s leading manufacturer of commercial aircraft up to 150 seats with more than 100 customers across the world. For the E-Jets program alone, Embraer has logged more than 1,800 orders and 1,500 aircraft have been delivered.

Today, E-Jets are flying in the fleets of 80 customers in 50 countries. The versatile 70 to 150-seat family is flying with low-cost airlines as well as with regional and mainline network carriers.