Himalaya Airlines made this announcement on social media: 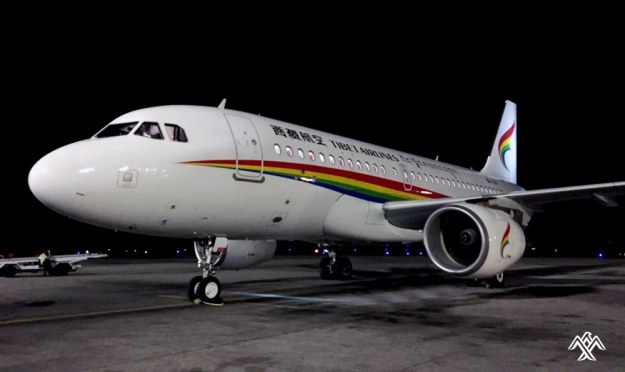 “The just-arrived aircraft will not only be able to fly to high altitude destinations like Lhasa and Ali in Tibet but will also allow Himalaya Airlines to increase its flight frequencies and serve more passengers efficiently.”

The aircraft will are repainted in the Himalaya livery:

A new video from Sam Chui. A review of Himalaya Airlines A320 from Dubai to Kathmandu:

Yeti Air International (Kathamandu), a subsidiary of the Yeti Airlines Group, has been reformed as a new joint venture between Tibet Airlines (Lhasa, Tibet) (49 percent) and Yeti World Investment and HIF Aviation Investment according to The Economic Times. This time the airline will operate as Himalaya Airlines.

Himalaya Airlines will launch operations on October 28 on the Kathamndu-Lhasa route with leased Airbus A320 Family aircraft.

The airline will literally fly “on top of the world”.

Tibet Airlines started operations on July 26, 2011 and is 31 percent owned by Air China.

Copyright Photo: Gerd Beilfuss/AirlinersGallery.com. Tibet Airlines will likely be the operator of the aircraft for the new joint venture. Airbus A319-115 D-AVYH (man 4766) became B-6436 on delivery.