Iberia Group made this announcement:

The Iberia Group ended the holiday period on a high note, with 75% more flights and nearly triple the number of passengers compared to a year ago.

Iberia, Iberia Express, and Iberia Regional Air Nostrum together operated nearly 5,700 flights in the December 22- January 9 period, almost 75% more than those of the same period a year ago.

The three airlines also carried some 1.2 million passengers during the holidays, almost triple the 478,000 figure of the year before.

Canary Islands capacity was raised by 4% in the period, to 180,000 seats. This was larger than the number offered in 2019, before the outbreak of the pandemic.

Iberia Group airlines posted regularity of 99.44% (no flights were cancelled due to Covid-19) and punctuality of 93.5%, which was tops amongst European network airlines during the period, and third in the world, according to Flightstats.

The group made use of the flexibility of the special lay-off arrangements in order to field the employees required at each moment. Idled flight deck and cabin crews amounted to 17% of total flight staff at the beginning of December, but this has since dwindled to 4%.

In both December and January Iberia deployed additional personnel to deal with incidents, and throughout the pandemic it has helped laid off flight deck and cabin staff to maintain or upgrade their professional qualifications in order to facilitate their reincorporation at a moment’s notice. 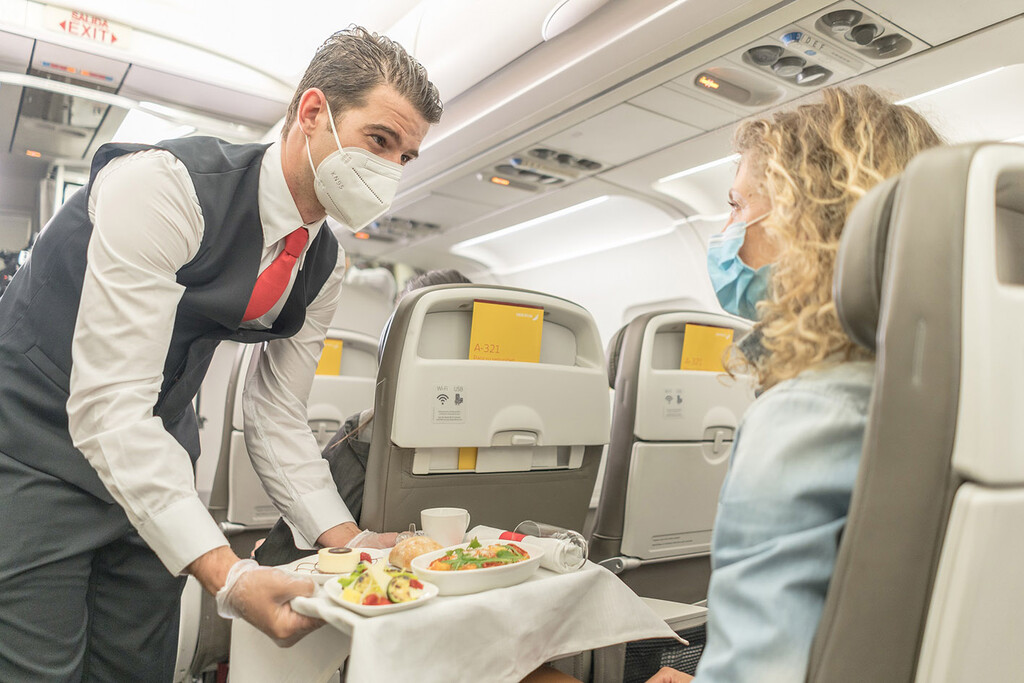 During the holiday period Iberia Airport Services provided ground services to some 11,200 flights, and 3.1 million passengers –nearly triple the number registered a year ago– at 19 Spanish airports where it serves Iberia and third-party airlines.

The handling unit, which will compete to renew its airport contracts this year, has reincorporated all laid-off employees and added nearly a thousand more during the holiday season, deploying them chiefly in Barcelona, Madrid,  and Tenerife.

Iberia Group has made this announcement:

This August , Iberia Group is offering regular scheduled flights to a total of 55 destinations in Spain and the rest of Europe, including new direct services to Prague and Berlin.

As in July, long-haul flights are being operated to countries open to air traffic, including Uruguay, Costa Rica, Ecuador or the United States, among others. Iberia is also operating special repatriation and cargo flights to countries still closed to schedules traffic. All flights are subject to each country’s restrictions.

Iberia’s flights are all now timed to facilitate connections at the airline’s hub in T4 of Madrid Airport.

These flights represent only 27% of Iberia’s planned pre-Covid-19 flight schedule, up by nine percentage points from July, thanks to the new destinations and added frequencies to the Canary and Balearic Islands, Barcelona, and other tourist destinations.

In addition to these flights originating in Madrid, the Iberia Group is also operating point-to-point Iberia flights such as Munich-Minorca, San Sebastian-Palma, and San Sebastian-Malaga, while Iberia Express is flying from Asturias to Gran Canaria and Tenerife, and from Vigo to Tenerife. Iberia’s franchise partner Iberia Regional Air Nostrum is flying from Nice to Malaga, as well as flights from different mainland destinations to the Canary and Balearic Islands.

The Iberia Group’s summer flight programme features new health and hygiene measures to ensure passenger safety and a pleasant travel experience, in keeping with the recommendations of the Spanish and European Air Safety Agency (EASA) and the European Centre for Disease Control (ECDC), intended to facilitate the recovery of air travel in a safe environment.

Here follows a summary of these measures, which are given in detail on the Iberia, Iberia Express and Iberia Regional Air Nostrum web sites.

Pre-flight:
•    During check in passengers must sign a Declaration of Health, attesting that they have no symptoms, have not been diagnosed with Covid-19, and have not been in contact with a known carrier.
•    On flights abroad passengers must also complete a “Health Tracking Form” and a “Health Questionnaire”.
•    Only passengers holding tickets to fly will be admitted to Spanish or other European airports.
•    Passengers are strongly advised to obtain their boarding passes before reaching the airport, downloading them to their telephones in order to avoid contacts.

At the airport:
•    All surfaces that may be touched by passengers are disinfected frequently and barriers have been placed in strategic positions at check in and customer service counters.
•    Queues for check in and other services have been redesigned to ensure distancing.
•    Passengers are strongly advised to check in their hand luggage (at no charge), in order to avoid unnecessary movements aboard the aircraft.
•    No hand luggage may be taken aboard that exceeds 56 x 40 x 25cm or 10 kg in Economy. On long-haul flights Business passengers may take two pieces of hand luggage not exceeding 14 kg.
•    For additional speed, safety, and convenience, passengers will board by rows, starting from the rear.

Other measures:
•    During flights all passengers above the age of six must wear face masks covering nose and mouth, preferably surgical ones.
•    Passengers must change their masks with the frequency indicated by the manufacturer. Bags will be provided for the storage or disposal of used masks.
•    Aircraft cabins will be thoroughly cleaned and disinfected as recommended
•    Air in cabins is replaced every 2-3 minutes, and HEPA filters eliminate 99.99% of all virus and bacteria from recirculated air.

On-board services
•    On each flight passengers will hear messages from health authorities about detecting, avoiding, and reporting symptoms of Covid-19.
•    Disinfectant wipes will be issued to all passengers, and extra supplies of hand-washing soaps will be available in toilets.
•    Single-use disposable utensils will be used in food service, which has been simplified.
•    Blankets and pillows issued on long haul flights are disinfected and sealed before use.
•    Duty-free sales and the distribution of newspapers and magazines during flights have been eliminated, but passengers can access more than 7,000 on-line publications, along with other entertainment options.
•    Outfitted in personal protection gear, Iberia cabin crews have also undergone specific training in the implementation of good health practices and special protocols, enabling them to detect and isolate any passenger showing suspicious symptoms.

Starting on July 1, 2020, Iberia will gradually resume its short- and medium-haul flight program, with change flexibility for all customers.

The airline is also prepared to resume long-haul flights as soon as conditions allow and quarantine and travel restrictions are lifted in the countries served by Iberia.

In June, Iberia is maintaining a minimum level of air connectivity similar to that of May connecting Madrid with the Spanish Islands (Canary Islands and the Balearic), Barcelona, Bilbao, Asturias, Vigo, La Coruña, London and Paris.

In July and August Iberia, Iberia Express, and Iberia Regional will fly to at least 40 and 53 destinations, respectively, with a total of at least 194 return flights per week scheduled in July, and 359 in August.

This amounts to just 21% of normal seat supply on the short- and medium-haul network, which may rise to 35% as demand increases.

Iberia Express has already added a new route to Stockholm (Arlanda) with two weekly flights. It will also add a new route to Amsterdam with twice-daily service starting on July 1.

Iberia Express is also increasing the number of flights to Berlin, Copenhagen, Dusseldorf and Frankfurt.

Iberia will add daily service to Istanbul starting on June 20. Santo Domingo will be added on September 1 with five weekly nonstop flights. Athens, which has been a summer route, will become a new year-round route.