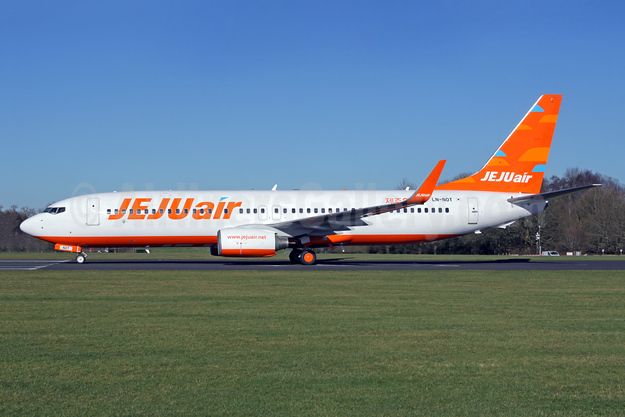 Jeju Air announced today it will operate cargo flights for the first time in order to adapt to the COVID-19 pandemic.

Jeju Air operates 84 routes, including the Gimpo-Jeju route, the world’s most frequently traveled aviation route, and routes to 49 destinations in the Asia-Pacific, including Japan, China, Philippines, Thailand, Vietnam, Guam, Saipan, Russia, and Laos. As of August 202, JejuAir is a 3,200-employee operation, with flights operating mainly out of Gimpo Airport and Incheon Airport in Korea.

Jeju Air Co Ltd announced today it would acquire a 51% stake in competitor Eastar Jet for 54.5 billion won ($45.49 million), a lower price than previously announced according to Reuters.

Read the full story on Reuters.

Jeju Air Company Ltd has signed a letter of intent (LOI) to acquire a 51% stake in the Eastar Jet Company for around 69.5 billion won ($58.9 million).

Boeing and Jeju Air announced the airline is ordering 40 737 MAX 8 airplanes with options for 10 additional jets. The deal, valued at up to $5.9 billion at list prices, is the largest order ever placed by a Korean low cost carrier and reflects rising demand for air travel in South Korea.

Jeju Air, based in South Korea’s Jeju Island, began operation in 2005 as the country’s first low-cost carrier. Since that time, the carrier has spearheaded the rapid development of Korea’s LCC market and contributed to the expansion of the broader Korean commercial aviation industry.

Flying a fleet of nearly 40 Next-Generation 737-800s, Jeju Air has steadily expanded its business and its profits. The airline has achieved 25 percent annual sales growth over the past five years and recorded 17 consecutive quarters of profitability.

Jeju Air is looking to build on its success with the enhanced version of the 737 jet. The 737 MAX 8 provides more range and offers 14 percent better fuel efficiency and environmental performance thanks to the latest CFM International LEAP-1B engines, Advanced Technology winglets, and other aerodynamic improvements.

Along with the new airplanes, Boeing Global Services will provide Jeju Air with digital tools to reduce their operating costs. The solutions include the Fuel Dashboard Program, which allows operators to look across their fleet and identify areas where they can optimize their fuel spending.

Jeju Air serves 60 domestic and international routes with approximately 200 daily flights. The carrier is a founding member of the Value Alliance, the first pan-regional low-cost carrier alliance formed with eight airlines based in Asia.

Jeju Air currently serves 40 domestic and international routes with approximately 150 daily flights. The carrier is also a founding member of the Value Alliance, the first pan-regional low-cost carrier alliance formed in 2016 comprising of eight airlines based in Asia. 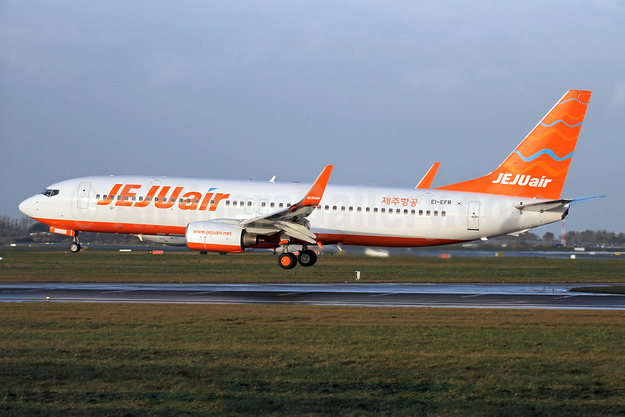 The pictured Jeju Air Boeing 737-800 was formerly operated by Ryanair as EI-EFR. It is seen arriving at Dublin on December 23, 2016 from Bournemouth in the UK where it was painted into the Jeju Air livery. The airframe will be delivered to the South Korean carrier in January 2017.

Jeju Air was established in January 2005 and commenced operations on June 2, 2006. It is owned by the Aekyung Group (75%) and the Jeju Provincial Government (25%). On July 11, 2008, Jeju Air completed its first international flight from Jeju Island to Hiroshima, Japan.