American Airlines today made this announcement:

American Airlines and JetSMART have signed a letter of intent to create the broadest network and most rewarding customer offering in the Americas. This proposed partnership would uniquely tie together the full-service, global presence of American with the complementary network of ultra-low-cost carrier JetSMART in South America to offer competitive fares and expanded travel options for flyers throughout North and South America.

Operating from Chile and Argentina, JetSMART is a portfolio airline of Indigo Partners, one of the world’s premier developers of new generation ultra-low-cost airlines. JetSMART operates a modern fleet of Airbus A320 aircraft and offers short-haul domestic and international service to 33 destinations throughout South America. American has served Latin America since 1942 and offers service to 17 destinations in South America from its U.S. hubs in Dallas-Fort Worth, Miami and New York. Through the two airlines’ codeshare, customers would be able to travel seamlessly throughout the Americas.

Under the proposed transaction, American would invest in JetSMART to facilitate this growth and give American a minority ownership stake in the short-haul South American carrier.

Additionally, American and Indigo Partners would jointly commit to provide additional capital to fund potential future opportunities in the region. American can strengthen and grow its South American network through this proposed partnership to attract more travelers in more markets. This proposed partnership, along with others in Latin America, would also give American customers access to more low fares and travel options on a network that is twice as big as other alliances.

The intended investments and codeshare agreements are subject to definitive documentation and any required governmental and regulatory approvals. American Airlines and JetSmart service to and within South America

Norwegian Air Shuttle has signed an agreement for the sale of 100 percent of its Argentinian subsidiary Norwegian Air Argentina (NAA) to JetSMART Airlines.

JetSMART will assume the NAA operation with immediate effect. To minimize the impact on passengers, JetSMART will continue to operate the NAA scheduled flights from Aeroparque airport. The parties expect that the integration process will take several months, and the Norwegian brand will be phased out in the domestic Argentinian network during this period.

“As Norwegian moves from growth to profitability, we are taking all the necessary actions required to ensure that Norwegian is well positioned going forward. Over the past few months we have made important changes to our route network to ensure long-term profitability. Attaining satisfactory profitability for a relatively small domestic operation has proved difficult to achieve, given the overall situation in the country. While most of NAA’s costs are denominated in dollars, revenue is obtained in pesos only, and the sharp depreciation of the peso against the dollar has created a significant gap between costs and revenue,” said acting CEO and CFO of Norwegian, Geir Karlsen.

Scheduled flights to be operated as plannedAll passengers who have purchased NAA flights will fly as planned.

NAA solely operates domestic flights within Argentina so the new agreement will not affect Norwegian’s long-haul flights between London and Buenos Aires. These are operated by the British subsidiary Norwegian Air UK.

Norwegian’s employees in NAA will, as per the agreement, be employed by JetSMART except for the company’s Argentina-based call center staff. They will continue as Norwegian employees providing customer services to JetSMART’s domestic Argentina operation and to our customers on our long-haul operation between Europe and South America.

“All our colleagues in Argentina deserve a word of recognition for their dedication and hard work. The past two years have proven eventful – not only have they built a fully-fledged airline from scratch, but they have also operated it to the highest professional standards. In doing so, they have earned for Norwegian the gratitude and respect of the Argentinian people,” said CEO of Norwegian Air Argentina, Ole Christian Melhus.

NAA received its Air Operator’s Certificate in January 2018 and started operations on 16th October that year. 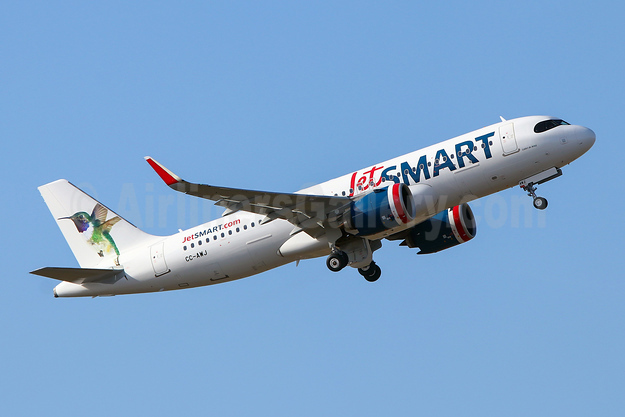 JetSmart announced the launch of twice-weekly nonstop routes from Santiago, Chile, to Colombia. The direct flights will link SCL airport with the cities of Cali from December 20, 2019, and capital city of Bogotá from January 9, 2020, transforming Colombia into the fourth country where the ULCC airline will fly from Chile (joining Argentina, Perú and Brazil).

JetSmart has announced its new routes, adding Brazil to its network. The three places that are to be added are the following (all flights from Santiago de Chile, SCL):

Salvador de Bahía, three times a week in summer (Southern Hemisphere) from December 27, 2019; the rest of the year it will operate twice a week.

Sao Paulo, initially two times a week from March 20, 2020.
JetSmart projects the route to Salvador de Bahía will transport more than 33,000 passengers a year, while to Foz de Iguazú and Sao Paulo, more than 30,000 pax per year respectively.
Alvaro Romero reporting from Chile.

Indigo Partners and three of its airlines will acquire 50 of the new Airbus A321XLR long-range, single-aisle jetliners. The Memorandum of Understanding includes new orders for 32 A321XLRs and the conversion of 18 existing A320neo family orders.

Twenty of the A321XLRs will be allocated to Wizz Air, 18 to Frontier, and 12 to JetSMART.

Airbus announced the launch of the A321XLR at the Paris Air Show. Derived from the A321neo, the A321XLR is the longest-range single-aisle commercial jetliner ever, capable of flying routes up to 4,700nm with unbeatable fuel efficiency. With a range previously found only in twin-aisle aircraft, A321XLR will enable airlines to exploit new route opportunities with low operating costs, reduced environmental impact, and provide passengers with a comfortable travel experience.

Chile’s ultra low cost carrier JetSMART has announced that Argentina is the second country to receive its international flights from Chile, after Perú.

The five new routes are: Buenos Aires (El Palomar), Córdoba and Mendoza, all from Santiago de Chile and something new: Argentine cities of Córdoba and Mendoza are also to be served by La Serena, a city located some 450 km north of Santiago, marking JetSMART operation as the first international service from La Florida (SCSE/LSC) airfield, thus becoming an international airport.

JetSMART will start the new services in December 2018 and January 2019.

JetSMART is also planning to increase its Airbus A320 fleet from 5 to 9 aircraft.

Airbus has announced that it had finalized agreements with Indigo Partners and its four portfolio airlines for the purchase of 430 additional A320neo Family aircraft for ultra-low-cost airlines Frontier Airlines (United States), JetSMART (Chile), Volaris (Mexico) and Wizz Air (Hungary).

The signed purchase agreement follows a Memorandum of Understanding among the parties announced at the Dubai Air Show last month.

Airlines in the Indigo Partners family had previous placed orders for a total of 427 A320 Family aircraft.

Airbus, Indigo Partners’ four portfolio airlines have signed a Memorandum of Understanding for the purchase by the four airlines of 430 additional A320neo Family aircraft. The aircraft will be allocated among the ultra low-cost airlines Frontier Airlines (United States), JetSMART (Chile), Volaris (Mexico) and Wizz Air (Hungary) upon the completion of final purchase agreements between Airbus and the four airlines.

The 430-aircraft commitment, comprised of 273 A320neos and 157 A321neos worth $49.5 billion at list prices, was announced at the Dubai Airshow by Bill Franke, Managing Partner of Indigo Partners, and John Leahy, Airbus Chief Operating Officer Customers, Airbus Commercial Aircraft. When added to existing Airbus A320 Family orders, the new agreement will make Indigo Partners one of the largest customers by order number in the world for the Airbus single-aisle aircraft family. Airlines in the Indigo Partners family previously have placed orders for 427 A320 Family aircraft.

Indigo Partners’ Bill Franke indicated that engine selections will be made and announced at a later date.

The A320neo Family incorporates the very latest technologies, including new generation engines and Sharklet wing-tip devices, which together will deliver 20 percent fuel savings by 2020.  With more than 5,200 orders received from 95 customers since its launch in 2010, the A320neo Family has captured nearly 60 percent market share.

Indigo Partners LLC, based in Phoenix, Arizona, is a private equity fund focused on worldwide investments in air transportation.

In conjunction with this announcement, Frontier Airlines issued this statement:

Frontier Airlines on November 15, 2017 announced its intent to order 134 A320neo Family aircraft from Airbus, which will triple the size of the low-cost carrier over the next 10 years. Valued at a list price of more than $15 billion, this announcement grows Frontier’s order book to more than 200 aircraft and means more than five thousand new, highly skilled jobs for the U.S. These aircraft are part of the single largest Airbus order announcement ever made – a 430 aircraft order valued at a $49.5 billion list price by Indigo Partners, Frontier’s owner.

This new 134 aircraft order is comprised of 100 A320neo and 34 A321neo aircraft. The A321neo will be a new compliment to the carrier’s existing fuel-efficient A321 family fleet. The addition of these aircraft to the fleet will allow Frontier to grow in new and existing markets, provide even more compelling low fares, further improve the carrier’s already industry-leading fuel efficiency and maintain the company’s status of having one of the youngest and most modern fleets in the U.S. The 134 aircraft order announced today will be delivered between 2021 and 2026.

In addition, in 2018 Frontier will start taking delivery of aircraft from Airbus’ U.S.-based Mobile, Ala. production facility.

This new order will allow Frontier to continue its focus on achieving the lowest costs in the U.S. airline industry and utilizing these savings to lower fares. Earlier this year, Frontier announced a network expansion that makes the carrier’s low fares accessible to 90 percent of Americans.