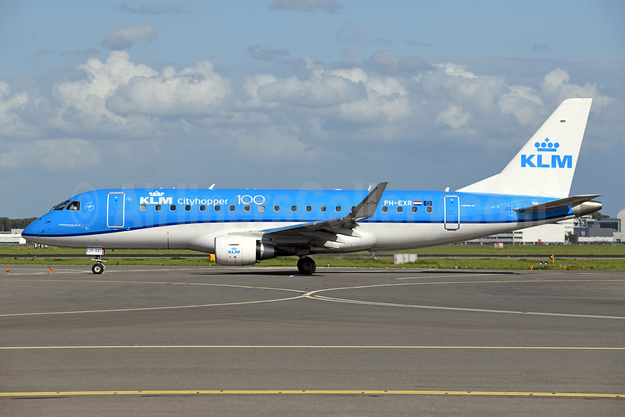 KLM Royal Dutch Airlines will expand its European network to include Cork, Ireland.

From March 2020, Ireland’s second largest city will be served daily with a direct KLM flight from Amsterdam. The flights will be operated using Embraer 175 and Embraer 190 equipment, seating 88-100 passengers per flight.

Cork will be the second Irish destination, next to Dublin, and is the 93rd European destination to be served directly by KLM. To open Cork as a new destination, changes have been made to the medium haul KLM network to free up slots at Schiphol.

Please note: all times are local.

Located on an island between two canals of the River Lee, Cork is a charming cosmopolitan city known for its maritime history spanning over a thousand years. The beautiful coastal environment is a must for nature lovers and adventurers, whereas city dwellers will enjoy the laidback feel of Cork, with its many cool coffee bars, museums, pubs and art galleries.

From the KLM Blog:

Take a peek inside the entire KLM fleet – without a ticket

As of late, you can take a virtual stroll through business class on a Boeing 787 without having to pay… How? We’ve taken photographs of the interiors of the entire KLM fleet using a 360° camera. VR specialist Chris Koomen, from KLM’s Digital Studio shares more about this exciting initiative.

“Our reason for taking 360° photos of the KLM aircraft – from Boeings to Airbuses – was actually very practical. We wanted to familiarise cleaners with an aircraft – the B787 – before its first flight to Minneapolis. They were set to come in the evening to clean the aircraft after its arrival, but had not yet seen this type from the inside. We knew that it would take a lot of extra time,” explains the VR man from KLM’s Digital Studio. “And we therefore came up with a solution. The members of the cleaning crew had an opportunity during the day of taking a virtual tour on an iPad, using a VR headset so they would be well prepared when arriving to clean the aircraft in the evening.”

“It was an experiment, but one that instantly booked success. Incredible! They finished cleaning fifteen minutes early and on top of that, they didn’t make a single mistake.” Cleaning crews are normally given a sheet of paper with a 2D drawing. Koomen: “Top and front views – that’s what they had to make do with. They’re going to be better prepared now.”

“The images are now regularly used for training purposes worldwide. And not only to the benefit of cleaning crews; the images are very handy for training new cabin attendants,” says Koomen. “New crew members can now become familiar with their workplace far quicker.”

The biggest group of users can be found at Catering Services. Koomen: “They use the images to train colleagues who set up the aircraft galleys.”

In short, the virtual fleet is handy for all our (new) staff members. But let’s not overlook our passengers and aircraft enthusiasts. It’s fantastic to be able to explore the interior of each aircraft from nose to tail, examining places on board where passengers don’t usually get to go. Examples here include the cockpit, galleys and business class. Or simply stroll through the B747, the Queen of the Skies. Or our latest acquisition, the Dreamliner B787-10. All of that, without taking a step on board.

Should you want to take a look inside our aircraft, we’ve hidden Easter eggs in some of them (something amusing for you to look for). See if you can find the meal in the B787-10, or take a virtual seat in our new business class seats inside the B787-10. You’ll be able to get to grips with all the new features like the adjustable privacy screen or the “Do not Disturb” button for even more privacy and individual space. And can you see that the B747 consists of two different parts. “It’s actually a combi carrier,” Koomen clarifies. “One part is entirely for passengers, while the other is for a 50:50 combination of cargo and passengers.”

Curious about the entire KLM fleet? Take a look inside ALL our aircraft:

Chris Koomen joined KLM twelve years ago. He started off as a technician, but has been preoccupied with VR since 1996. He refers to it as a “runaway hobby” he turned into a business three years ago. The VR team now consists of eight people who focus continually on designing and creating VR training programs, computer generated and 360° photos & videos alike.

Embraer and KLM Cityhopper have signed a firm order for 21 E195-E2 aircraft, plus 14 purchase rights. The 21 firm positions will be acquired via operating lease from Embraer lessor partners Aircastle and ICBC Aviation Leasing. The order was previously announced as a Letter of Intent for 15 firm orders with 20 purchase rights at the Paris Air Show earlier this year. With all purchase rights exercised the deal would have a value of $ 2.48 billion.

The aircraft for this order will come from the existing backlogs of lessors Aircastle and ICBC Aviation Leasing; each providing KLM with 11 and 10 E195-E2s, respectively.

KLM will configure the aircraft with 132 seats. Deliveries will begin in the first quarter of 2021.

Embraer announced today, at the 53rd International Paris Air Show, KLM Cityhopper’s intention to purchase up to 35 E195-E2 jets, 15 firm orders with purchase rights for a further 20 aircraft of the same model.

This intention, which still requires a Purchase Agreement, has a value of $2.48 billion based on Embraer’s current list prices. The order will be added to Embraer’s backlog as soon as a firm contract is completed.

KLM Royal Dutch Airlines operated its first flight to the Polish city of Wrocław on Monday, May 6, 2019. Wrocław is the fourth destination to be served by KLM in Poland. The flights will be operated daily using Embraer 175 equipment.

Wrocław lies in western Poland on the banks of the River Oder. Wrocław has a population of more than 600,000, making it the fourth-largest city in Poland. Wrocław is a lively university city with a flourishing business community. The market square is a real eye-catcher, boasting pastel-coloured buildings and lined with cosy cafés and eateries.

Shower of affection with ambassador

Launching the new route was fittingly celebrated with a shower of affection at Wrocław airport. The Dutch Ambassador to Poland, Ron van Dartel, and the CEO of Copernicus Airport Wrocław, Dariusz Kuś, attended the festive ceremony.

KLM will be operating its daily flight from Schiphol to Wrocław using Embraer 175 equipment. This aircraft seats 20 passengers in Europe Business Class, 8 in Economy Comfort and 60 in Economy Class.

Flight KL1271 will depart from Amsterdam Schiphol at 11:50 hours and touch down at Copernicus Airport Wrocław at 13:35 hours.

KLM already offers flights to the Polish cities of Warsaw, Krakow and Gdansk. Since last summer, Air France has been operating flights to Wrocław from Paris Charles de Gaulle.

All photos by KLM.

The agreement between the two airlines will see Stobart Air provide an E195 jet on an ACMI contract (aircraft, crew, maintenance and insurance) for the purpose of operating up to eight flights per day from Amsterdam, including Dublin to Amsterdam.

The partnership with one of the world’s oldest and most established airlines, follows Stobart Air’s recent €36 million investment in two Embraer E190 jet aircraft to service routes for BA Cityflyer from London City Airport, and the addition of 40 new jobs.

In 2018, Stobart Air’s overall passenger figures increased by 12% on the previous year, with the airline carrying 2,224,037 passengers on over 43,500 flights throughout the year.

The airline reported a significant increase on its Flybe routes from London Southend Airport, with passenger numbers doubling last year to 500,000.

Wrocław lies in the west of Poland and has much to offer travellers. In 2016 it was Cultural Capital of Europe.

The city of Wrocław (pronounced: vrɔtswaf) has a population of more than 600,000 and is Poland’s fourth largest city. Wrocław is KLM’s fourth destination in Poland after Warsaw, Krakow, and Gdansk. Air France began operating a service to Wrocław’s Copernicus Airport this summer. Wrocław is a lively university city where trade and industry flourish. It has a beautiful old market square, which is lined by pastel-coloured buildings housing cafes and restaurants.

KLM will operate a daily service from Schiphol to Wrocław using Embraer 175 equipment. This aircraft has 20 business class seats, an Economy Comfort zone with 8 seats, and 60 Economy Class seats.

Starting on May 14, 2018, KLM Royal Dutch Airlines is flying to Växjö, Sweden every day and does so as sustainable as possible. This means KLM not only purchases sustainable biojet fuel for the route, it also compensates the total remaining carbon dioxide emissions of all flights through KLM’s CO2ZERO service. 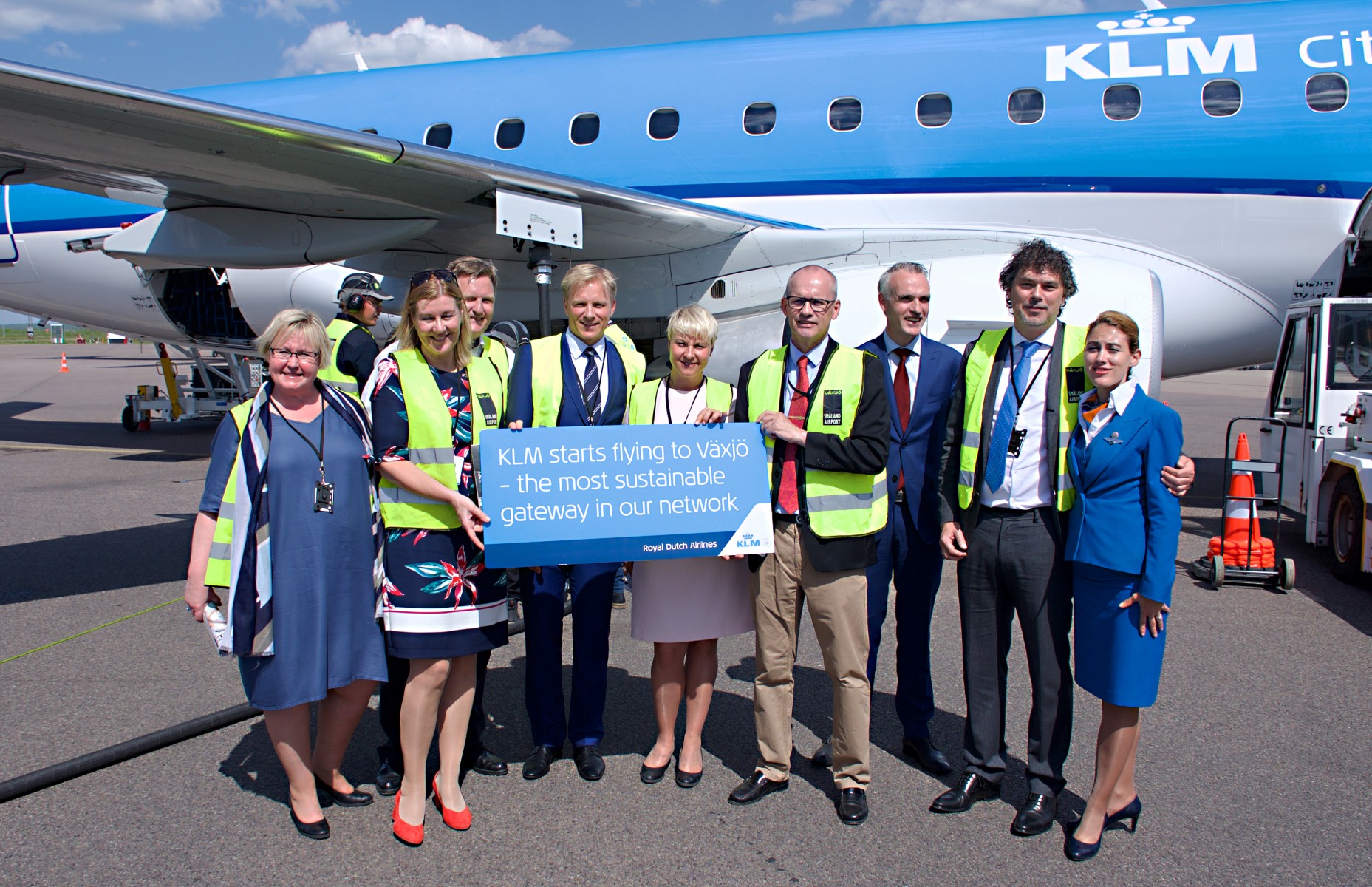 “KLM is involved intensively in flying as environment friendly as possible, for instance, by investing in sustainable biojet fuel. I am pleased that KLM and Växjö Småland Airport are compensating jointly for the total CO2 emissions of flights to and from Växjö. This makes Växjö – our most sustainable destination – a valuable addition to the KLM network. It is one more step towards making aviation more sustainable, in which cooperation with local partners is crucial. Support from other companies, governments, and other airlines is necessary if we are to make aviation truly sustainable.”

Sustainable biojet fuel contributes significantly to making aviation more sustainable, but is still two to three times more expensive than fossil fuel. Södra, Sweden’s largest cooperative of forest owners, based in Växjö, will be the first non-Dutch partner in the KLM Corporate BioFuel Programme. Together with Södra and the City of Växjö, KLM and SkyNRG will also investigate the feasibility of producing biojet fuel in the region around Växjö.

CO2 compensation on the Växjö route
As it is not yet possible to fly entirely on sustainable biojet fuel, KLM and Växjö Småland Airport are joining forces to pay jointly for the total CO2 compensation for flights to and from Växjö. The money will go to the reforestation initiative CO2OL Tropical Mix in Panama, a ‘Gold Standard for the Global Goals’ project. The project converts degraded meadows into mixed forests by planting a mix of native tree species and some exotic species. In addition, the project’s activities create long-term employment thereby providing a sustainable source of income for the local population.

Växjö
Växjö is the capital of the Kronoberg region located in the south of Sweden. The city has an entrepreneurial climate and a renowned university. It is surrounded by beautiful nature, offers a wide range of outdoor activities, and has an excellent gastronomic reputation.