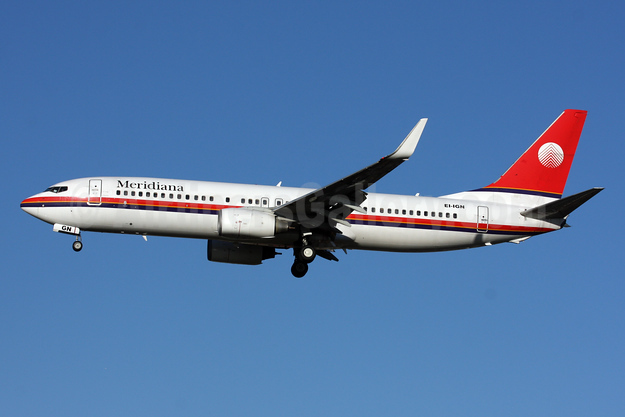 Meridiana fly fully acquired Air Italy (2nd) in October 2011. By April 2013, Air Italy had been fully merged into Meridiana fly, which decided to adopt the shorter Meridiana name once again.

Now under the guidance of new partner Qatar Airways, the company is reverting back and will adopt the Air Italy brand as the new stylist airline of Italy.

On February 19, 2018 the airline formally made this announcement:

Air Italy aims to have approximately 50 aircraft by 2022 and is already committed to receiving 20 of the brand new Boeing 737 MAX aircraft type from April 2018, over the next three years. Air Italy will also receive five Airbus A330-200 aircraft this year from the Qatar Airways’ fleet, prior to these being further replaced by Boeing 787-8 Dreamliner aircraft, commencing in May 2019.

Network destinations will also enjoy continued expansion, with new long-range routes from Milan to New York and Miami already announced recently, that will soon be followed by new short-haul routes connecting Milan and the airline’s long range destinations to Rome, Naples, Palermo, Catania and Lamezia Terme. In September 2018 Air Italy will be launching four weekly flights from Milan to Bangkok. Three additional long-haul destinations will be opened by the end of the year.

Further plans also include strengthening the short-range network to improve connectivity and launching the first long-range destination from Rome Fiumicino in 2019. Air Italy aims to fly more than 50 year-round routes by 2022.

Commenting on the new airline identity and developments, Chairman of Alisarda, Mr. Marco Rigotti, said: “Our ambition is strong now as it has been throughout our history, starting with the aim of assisting in the development of tourism in Costa Smeralda and, later, to develop the leisure and charter Italian market place.

“Over the last 10 years Meridiana has witnessed the radical transformation of the European aviation industry, characterised by a fierce competition. Air Italy aims to be a leader in the global industry, thanks to the airline’s hub in Milan Malpensa, and the reinforced base of Rome Fiumicino, alongside the seasonal network from Olbia’s Costa Smeralda heritage base which is also the headquarters of the airline”.

Qatar Airways Group Chief Executive, His Excellency Mr. Akbar Al Baker, commented: “Qatar Airways is known the world over as the best airline in the world, as voted for in Skytrax 2017. It is with this ambition and dedication to the passenger experience that we will work together to build a sustainable airline alternative for the people of Italy and global travellers to and from this beautiful country”.

“With high quality and an affordable schedule of services in the domestic, regional and intercontinental segments, Air Italy will achieve global scale in both fleet and network expansion, offering high-quality premium class products across all flights on a modern fleet.”

Qatar Airways previously strengthened its commitment to Italy in 2017 with the acquisition of 49 percent of AQA Holding, the new parent company of Air Italy, while the previous sole shareholder Alisarda kept 51 percent.

Meridiana’s Chairman, Francesco Violante, commented: “Air Italy has an ambition to reach a goal of transporting 10 million passengers per year by 2022 traveling to, from and via Italy. We expect more than 8 million of these to use Milan Malpensa airport. In support of this ambition, there is a great need to develop new skills and competences amongst our people and for all to embrace change as a fantastic opportunity. I wholeheartedly support this new effort.”

Meridiana has carried more than 100 million passengers to date as full-service carrier, operating both short-haul and long-haul flights. The Company has more than 1,400 dedicated employees, maintains codeshare partnerships with other major airlines, and is a full member of IATA and the largest airline at Olbia Costa Smeralda airport.

Meridiana fly (Olbia, Sardinia) on July 18, 2011, announced a merger with Air Italy (2nd) (Milan-Malpensa). Since then the two airlines have been operating as two separate airlines with their own brands and operating philosophies. This is now changing.

Meridiana has been using the Meridiana fly name since its merger with Eurofly (Milan-Malpensa) on February 28, 2010. Now the company will revert back to just Meridiana for the rebranding. The pictured 1991 livery above will now become the standard livery for all of the merged aircraft. For now, until the merger is complete, Air Italy is technically wet leasing its aircraft to Meridiana. The pictured Boeing 737-800 of Air Italy carries a small “Supplied by Air Italy” sticker applied close to the main forward left door.

The Air Italy brand will now be retired.

According to commercial director Andrea Andorno, “we want to emphasize the characteristics of full service carriers for the high-class clientele. No more low cost philosophy” according to this report by La Stampa.

Air Italy (2nd) (Rome) will be merged into Meridiana fly (Olbia) by February 15. According to this report by First Online (translated from Italian), “Meridiana SpA will acquire all of the ordinary shares held by the former shareholders of Meridiana fly – Air Italy Holding Ltd. (Marchin Investments BV, Pathfinder Ltd and Zain Holding Ltd., which together control 38.71% of the shares of the combined airline group). Meridiana fly will then turn over 89.91% of the share capital to its new controlling shareholder AKFED, controlled by Prince Karīm al-Hussayn Aga Khan. The transfer of shares will be completed by February 15. The new CEO of the reorganized Meridiana fly will be Roberto Scaramella, the aviation director of AKFED, who replaces Joseph Gentile.”

Meridiana fly was originally founded as Alisarda on March 29, 1963 by Prince Karīm al-Hussayn Aga Khan, with the aim to promote tourism in Sardinia. Scheduled flights have been operated since 1964.

At the end of February 2010, a new airline was founded: Meridiana fly, born from the merger of Eurofly, a company specializing in charter flights and Meridiana, with a scheduled European and national route network, mostly aimed at connecting the main Italian airports with the two main islands of Sardinia and Sicily.

Additionally, according to ch-aviation, the AOCs of both carriers were revoked by ENAC this week due to the financial difficulties of the two carriers and were issued temporary AOCs for a year.

Currently the two Italian airlines are now sharing the same website. Aga Khan is expected to increase his share holdings and investment in the new airline.

Bottom line, the Air Italy name and brand will be retired.

Bottom Copyright Photo: Marco Finelli. Meridiana fly has been slow to develop its own brand. Since the merger with Eurofly, most aircraft are still operated in uninspiring white schemes. Even this Airbus A320-214 I-EEZI (msn 749) at Bologna still wears the old colors of Eurofly. A total remake of the new entity must be accomplished for the new company to thrive.

Meridiana fly (Olbia) will operate a twice-weekly summer seasonal service from its Olbia (Sardinia) base to Hamburg starting on May 15 per Hamburg Airport.

Alitalia (2nd) (Rome) and Meridiana fly (Olbia) are in merger discussions according to a report by Il Messaggero on February 12, 2011. Bloomberg is reporting that no decision has been reached, quoting Meridiana fly owner Aga Khan.

Copyright Photo: Marco Finelli. Please click on the photo for the full story.