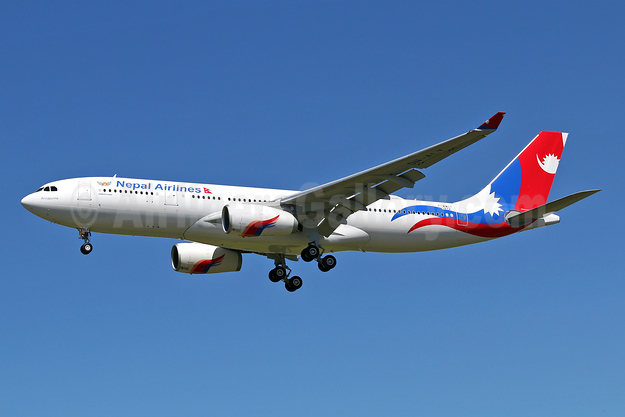 Nepal Airlines has taken delivery of the first of two Airbus A330s, which it will lease from Portuguese lessor Hi Fly. These will be in addition to its two existing A320ceos, and will be one of the largest aircraft operating out of Tribhuvan International Airport.  Situated at high altitude, only the most sophisticated of aircraft are capable of operating from this location, which is Nepal’s gateway to destinations in the rest of Asia and beyond.

The A330 is the most popular widebody aircraft ever, having won over 1,700 orders from 119 customers worldwide. Today, over 1,300 A330s are in service with 124 airlines, flying on everything from high density domestic and regional operations to long range intercontinental routes.

Nepal Airlines Corporation (NAC) (formerly Royal Nepal Airlines) (Kathmandu) took delivery of its first Airbus A320 on February 7. The pictured Airbus A320-233 D-AXAR (msn 6445) (above) in the 2014 livery is also equipped with Sharklet fuel saving wing tip devices. The aircraft became 9N-AKW on delivery and is named “Sagarmatha”.

Nepal Airlines is planning to introduce the new type on February 26 on the Kathmandu – Hong Kong route. The next day it will be introduced on the Bangkok route.

Nepal Airlines is moving to an all Airbus jet fleet. The airline has another A320 on order. The two A320s will replace two older Boeing 757-200s (below).

Following a handover in Hamburg, the aircraft was welcomed at a ceremony attended by government and airline officials at its home base on arrival in Kathmandu.

Below Photo: Nepal Airlines. The interior of the first Airbus A320.

Top Copyright Photo: C. Brinkmann/Airbus (all others by Nepal Airlines).

Nepal Airlines (Kathmandu) de Havilland Canada DHC-6-300 Twin Otter 9N-ABB (msn 302) has crashed today while operating flight RA 183 from Pokhara to Jumla, Nepal with 15 passengers and three crew members. The aircraft did not arrive at its planned destination. Burning wreckage has been located in the jungle near Khidim. There are no reports of survivors.

The A320 was chosen for its unique performance capability required for high altitude airport operations and its flexibility that enables it to be deployed on a wide variety of routes. Equipped with Sharklets to deliver unbeatable economics and up to four percent reduction in fuel burn, the aircraft will be the cornerstone of NAC’s modernized fleet.

Nepal Airlines currently flies to four international destinations and 25 spectacular domestic locations in the heart of the Himalayas. The new A320s are fully equipped with latest Required Navigation Performance (RNP) technologies, allowing the aircraft to fly precisely along predefined routes using state-of-the-art onboard navigation systems. This is particularly beneficial for operations at high altitude airports which are constrained by mountains such as the carrier’s main base in Kathmandu.

Nepal Airlines Corporation (NAC) (Kathmandu) has jumped from Boeing to Airbus and has signed a Memorandum of Understanding (MOU) to acquire two Airbus A320 aircraft equipped with the Sharklet fuel saving wing tip devices. Sharklets deliver up to four percent savings in fuel consumption making the aircraft a cornerstone of NAC’s fleet modernization.

Nepal Airlines (Kathmandu) has become a new prospective Airbus customer by signing one A320 and one A330-200. The new order was announced at the Dubai Air Show.

Nepal Airlines (Kathmandu) will fly to Lhasa (Tibet) starting next year following a new treaty between Nepal and China.  Air China will also be permitted to fly the same route.

Nepal Airlines (formerly Royal Nepal Airlines) (Kathmandu) has been denied government permission to order new airplanes. One member of the Public Accounts Committee described the flag carrier as being on the “verge of liquidation”.