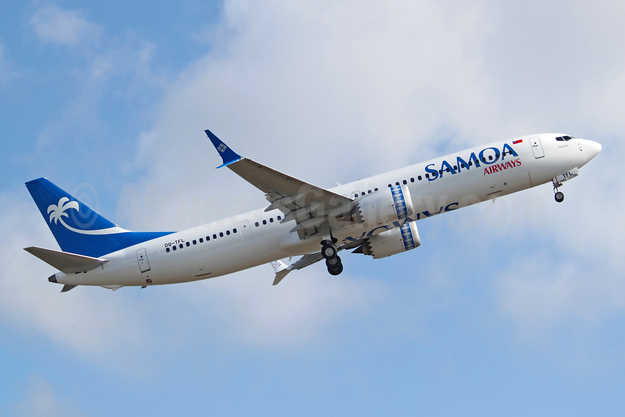 Samoa Airways and Air Lease Corporation (ALC) previously signed a memorandum of understanding (MOU) in Apia, for the lease placement of one new Boeing 737-9 MAX 9 aircraft.

The aircraft was scheduled for delivery in late March 2019 as DQ-TFL and was due to replace its existing 737-800.

The lease was cancelled as a result of the March 2019 worldwide Boeing 737 MAX groundings.

Above Copyright Photo: Joe G. Walker. The MAX 9, msn 43339, ln: 7163 will now be going to Alaska Airlines. Aircraft has a “Boeing Capital” registration of N235BE and rudder is now in partial AS colors.

Samoa Airways and Air Lease Corporation (ALC) have signed a memorandum of understanding in Apia, for the lease placement of one new Boeing 737 MAX 9 aircraft.

Scheduled for delivery in late March, the aircraft, which will be delivered direct from Boeing in Seattle Washington, will replace the National Carrier’s existing 737-800.

The airplane will feature the new Boeing Sky Interior, highlighted by modern sculpted sidewalls and window reveals, LED lighting that enhances the sense of spaciousness and larger overhead stowage bins.

The MAX’s technological advances plus its powerful LEAP-1B engines are redefining the future of efficient and environmentally friendly air travel.

Samoa Airways is set to become the first airline in the South Pacific Region including New Zealand and Australia to operate the new Boeing 737 MAX 9.

The new aircraft will be configured with 16 Business Class seats and 173 seats in Economy Class, and will operate between Apia, Auckland, Sydney and Brisbane.

Samoa Airways has made this announcement:

Just a few months shy of its one-year anniversary, the national carrier has announced that (subject to regulatory approval) it will fly direct between Apia and Brisbane, twice weekly, on Tuesday and Sunday, using its 737-800 aircraft.

The launch flight is scheduled to take off on November 13, 2018 to mark one year since Samoa Airways took to the skies.

It’s the latest milestone in the airline’s short history, and one which promises great potential.

“The Brisbane area is home to a large Samoan population and I am particularly pleased that the national carrier, with the support of Brisbane Airport, is able to respond to calls by our community who travel frequently between Samoa, American Samoa and Brisbane for family, church and cultural obligations, for improved air access”, said Tupuivao Seiluli Alvin Tuala, CEO of Samoa Airways.

At the announcement today, Tupuivao has signed a partnership agreement, acknowledging the relationship between Queensland and Samoa, and the collaborative approach by Brisbane Airport and the national carrier to establish non-stop air services, with Gert-Jan de Graaff, CEO of Brisbane Airport Corporation.

The Minister for Samoa Airways, Lautafi Selafi Purcell will deliver the official address on behalf of the Samoan government and Samoa Airways at this occasion in Brisbane.

A special event for the Samoan community in Brisbane will also be held in Ipswich today as part of this announcement.

Hon. Lautafi will also be the main speaker for this gathering.

Brisbane Airport is Australia’s third busiest, with total annual passengers of 23 million in 2017.

It is a key gateway which serves 32 international ports and 52 domestic destinations and Brisbane Airport is an award winning airport offering world class facilities.

Brisbane also has a large and wealthy passenger catchment of around five million people. This includes 2.3 million people in the Brisbane area which includes a strong and growing Samoan community.

Around 1.1 million people live in the surrounding regions which are within a 90 minute-drive, including the Sunshine Coast, Gold Coast and northern New South Wales, with a further 1.6 million in northern and inland Queensland in areas such as Mackay, Townsville and Cairns.

Brisbane is also home to some of Australia’s well known travel brands and improved air access from this key gateway will support leisure tourism opportunities for Samoa as a destination.

The new flights will be available for bookings soon.

All images by Samoa Airways).

The Somoan government decided to walk away from Virgin Samoa and create its own national airline.

Earlier this year, the Government of Samoa announced that, with the initial support of Fiji Airways, it would re-launch international jet services to and from Samoa. This airline alliance would help expand the “Pacific Partnership Alliance” and allow for more growth for airline routes into the South Pacific.

Samoa Airways is managed and staffed by a local team with extensive airline business and operational experience and wholly-owned by the Government of Samoa. In addition to air services, other key parts of the company’s business include ground handling services for Air New Zealand and Fiji Airways and non-commercial operators flying into Faleolo International Airport (Samoa’s gateway), as well as General Sales Agency services.

Acknowledging the airline’s origins and links, Samoa Airway’s logo features an adapted version of the iconic coconut tree which since 1959 has been the symbol of Samoa’s national carrier.

To visitors, the coconut tree evokes warm tropical weather, beautiful beaches and the luxuriant Pacific environment which Samoa has in abundance.

For Samoans, the coconut tree has countless uses and like the growth trajectory of the ‘tree of life’, it also represents the resilience and versatility of Samoans to punch above their weight and proudly take their place on the global stage. Combined with its age-old culture and way of life, it’s these simple pleasures and authentic experiences which draw many visitors to Beautiful Samoa.

While the designs use the blue, red and white of the Samoan Flag, the airline’s livery also incorporates Samoan motifs which have a special meaning in Samoan culture.

All images by Samoa Airways.