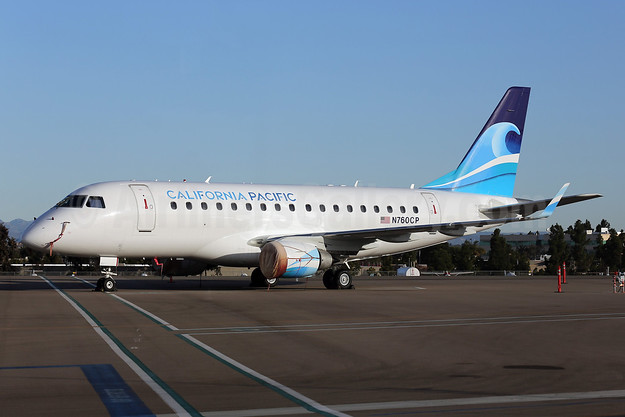 California Pacific Airlines (Carlsbad, CA), which failed in its first attempt to gain its Part 121 AOC with an Embraer 170 (above), is still alive. It has found another way to start operations in 2018.

The History of California Pacific Airlines by Ted Vallas:

In 1980 I had received air carrier permits and approvals to operate a scheduled 121 operation out of Carlsbad Palomar Airport to a number of California, Nevada, Arizona, and Mexico cities.

Just prior to my first start, I had moved my Flag and Domestic Air Carrier operation from the Caribbean to Carlsbad’s Palomar Airport. The move added five Convairs and a complete repair station to my Palomar Operations.

At approximately the same time and prior to my start, a Lear Jet operator began a Lear training program using Palomar’s instrument landing system (ILS) and other facilities. He moved in a number of very noisy Lear Jets from other areas for touch-and-go operations. His flights caused hundreds of noise complaints from the area residents, which were definitely justified.

Even though I had received approvals for any operations after a number of hearings, the airport manager approached me to delay my flights until the Lear Jet operator completed his program and the complaints quieted down. I agreed with the understanding that the permits already granted to me would not require any further hearings.

After the Lear Jet operation left Palomar, but before I could start my schedule, area residents requested that I go through new hearings. The airport manager went along with their request and did not honor his commitment to me. He withheld my counter space and gate area telling me that the pressure from the area residents was too great on the City Council and him without new hearings. Realizing that I would not get new permits approved, I moved the flight operation to San Diego’s Lindbergh Field.

I was able to continue my helicopter operation, repair stations and my Super 580 Aircraft company modification center at Palomar. In preparation for my operations, I had built a number of hangars and office buildings at Palomar. I also approached the County to allow me to build a much needed new and modern terminal building and restaurant hoping that it would open the door for the return of my desired scheduled operations. Even though the airport manager and the County of San Diego approved of my request, the FAA did not.

About three decades later, the County of San Diego, owner of the airport, has taken an entirely different approach to its vision for the future of Palomar Airport by building a modern air terminal that meets my desire for a facility to support a scheduled airline operation. The first piece of my dream is now in place.

My business plan of 1980 was nearly identical to my proposed plan of 2009. I recognized thirty years ago the need for scheduled service from North San Diego County, which could be recognized as a “hometown airline.” Today, anyone who resides or conducts business in the North County will see an immediate need for better air transportation from our own area.

We only have to look back some twenty years when the pride and joy of San Diego residents was its Pacific Southwest Airline (PSA). It was a true regional airline flying point-to-point through the state and region. Back then, the entire San Diego County population was not as large as today’s North County of 1.3 million people.

CP Air will rejuvenate the regional air system concept. You might rightfully say that I am copying and improving upon the successful portions of the old PSA plan of point-to-point service.

Operations out of Carlsbad’s Palomar Airport will save North County residents (1) a typical three-hour roundtrip to San Diego’s Lindbergh Field, (2) a delay of ninety minutes standing in lines, clearing security, and preparing for flight, and (3) an average expense of $24 for parking.

To augment my original plan, I will use new, state of the art jet aircraft featuring 2 by 2 seating. This seating configuration offers a much more comfortable experience eliminating the dreaded “middle seat”, at least 31 inches of legroom, and the widest coach seat in the air. To add to the comfort and convenience, each of our passengers will receive a seat assignment.