Star Air has made this announcement:

Passengers can now fly between Hyderabad and Bengaluru on Star Air’s Embraer Jet from August 26, 2021 and have a private jet-like experience. The flights will be operated on every Tuesday, Thursday and Saturday.

Hyderabad is the 15th destination that Star Air has added to its network.

For the first time, Star Air will be competing with the major players in the industry with its 50-seater Embraer Jet which offers superior comfort by providing extra legroom with a 31″ seat pitch and no middle seats.

Along with connecting the metro cities of Bengaluru and Jamnagar, Star Air is introducing direct flights from Jamnagar to Bengaluru and Hyderabad from 26th August, 2021 as well.

Star Air (India) made this announcement:

Star Air, after spreading its wings in eight Indian cities spanning across five Indian states is now on the verge of connecting one more state under its airline’s operations. Financial capital of Madhya Pradesh, Indore, is the next connecting destination of this promising aviation player. This airline, which has gained phenomenal success in Karnataka, Maharashtra, Delhi-NCR, Andhra Pradesh, Uttar Pradesh, and Gujarat region of India, is now ready to win people’s hearts of yet another city from next year. Star Air would start its nonstop flight services connecting Belagavi, Karnataka with Indore from  January 20, 2020.

Indore and Belagavi are two important regions of India which till date are not connected with direct flight services. People who want to travel between these two cities (or any nearby locations of these cities) have to travel far, which creates hassle and much inconvenience during their journey and make the whole voyage unpleasant. With the new flight services, Star Air would not only become the first airline in India to connect these two vital regions, but also fulfil the long-standing demand of people living across the geography of these two cities. It is expected that millions of people from South and West Maharashtra, North and West Karnataka, and from many districts adjacent to Indore would be benefitted by this upcoming service. Especially, districts from Maharashtra like Kolhapur, Sangli, Satara, Solapur, Sindhudurg, Ratnagiri along with Goa and many districts from Karnataka like Belagavi, Dharwad, Karwar, Vijapur, Dawangere would be benefitted because of this connectivity.

Star Air will provide its direct flight services between Indore and Belagavi thrice in a week.

Star Air operates under the UDAN scheme. Hence, its seats are available at very reasonable rates,so that anyone can fly to his/her dream destination without much expense. Currently, it provides services to eight Indian cities like Ahmedabad, Belagavi, Bengaluru, Delhi (Hindon), Hubballi, Kalaburagi, Mumbai, and Tirupati.

Star Air has made this announcement:

Star Air, part of Sanjay Ghodawat Group, since its inception in January 2019, has always taken the right step to create a niche for itself in this highly competitive but lucrative aviation arena. After garnering immense praise for its various popular services, and earning accolades for achieving the best on-time performance delivery in the startup category at all India level, the airline is now set to add one more golden feather to its cap.

Star Air will create history by launching its commercial air services from Hubballi to Hindon Airport (Delhi). It would be the first airline in India to start commercial operations from Hindon Airport, which is very close to New Delhi. Hindon is most suited for passengers travelling to Noida, Ghaziabad, Meerut, Nainital, Uttarakhand and Northern U.P. The nearest Delhi Metro stations is Rajendra Nagar on Red line, using which the entire Delhi becomes reachable within 1 hour.

Hindon has been an active Air Force Base for many years. The first ever passenger terminal was inaugurated on 8th March, 2019 by Honorable PM of India, Shri Narendra Modi. This airport is well-equipped with all modern facilities. As of now, Hindon Airport can handle up to 300 passengers at the same time but AAI is committed for its further expansion whenever the situation demands. This Airport will start its operations under the RCS-UDAN scheme where connectivity between Tier-2 and Tier-3 cities with metro cities would become a reality.

Bengaluru-based Star Air is set to add more Embraer 145 aircraft to its existing fleet in coming months. The company has a tie-up with Embraer and placed a new order for the purchase of three more advanced Embraer ERJ 145 aircraft. This deal is expected to strengthen Star Air relationship with Embraer further. 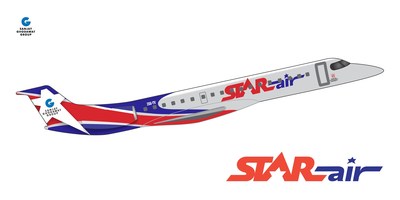 Star Air of India made this announcement:

After receiving tremendous applause for its commendable air services across different parts of India – Star Air is set to expand its operations. Mumbai is the latest addition to its already existing air routes. The airline is expected to start its operation between Belagavi and Mumbai from September 6, 2019.

Star Air (India) has announced it will begin scheduled passenger operations on January 25. The new airline received its AOC on January 1, 2019.

The upstart is introducing service from Bengaluru to Hubballi.

Star has made this announcement:

It has been a known fact that the aviation industry has witnessed an exponential growth in the recent years. Although a lot of new airports have been operationalized, the airlines are constrained to provide direct (no transit) flights from these airports. Envisioning this demand of smaller business jets flying directly from A to B, the Sanjay Ghodawat Group – a reputed business house in India with over 20 business verticals, have entered the aviation with a promising new airline – Star Air.

Headquartered in the Bangalore International Airport, Star Air has been established with a view of serving the common man, with an experience like that of a business class. “What we aim for is to create the right balance between a common man’s pocket and the expectations which he holds from an airline,” quoted Capt. Simran Singh Tiwana, CEO of Star Air. “In due course time, we aim to provide an all jet engine fleet connecting new city pairs,” he added.

Introducing the Embraer ERJ 145 for the first time in India in commercial airline, Star Air has smartly chalked out a road map, which seems to go a long way. The plane, till date, was the chosen favourite of the business class as private business jets. Starting off with a fleet of two aircrafts, the airline is planning a steady expansion.

Under the UDAN regional connectivity scheme, launched by the Govt. of India, Star Air has bagged three routes under their wings:

The airline is yet to disclose its routes from Bangalore and other cities.

The airline is all set to takeoff, with its first flight expected in mid-July 2018.