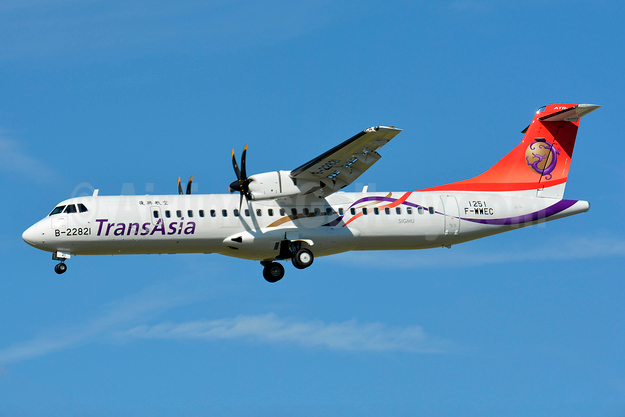 TransAsia Airways (Taipei) doomed flight number GE 235 death toll has risen to 40 today including the two pilots. Three people remain unaccounted for and 15 people survived the accident according to CNN.

Investigators have been reviewing the data from the flight data recorder (FDR) and the cockpit voice recorder (CVR) for clues of why the ATR 72-212A (ATR 72-600) crashed on takeoff from Taipei (Sungshan) on February 6 with 53 passengers and five crew members on board.

The Aviation Safety Council of Taiwan is collecting data and has suggested the pilots may have turned off the working engine prior to the crash. They were able to restart one engine but it was already too late. The ATR 72 hit a taxi and clipped the bridge and subsequently crashed upside in the river as previously reported.

Copyright Photo: Manuel Negrerie/AirlinersGallery.com. Rescuers are pictured looking for and removing survivors from inverted ATR 72-212A (ATR 72-600) B-22816 (msn 1141).

TransAsia Airways (Taipei) today (February 4) has suffered another crash. Brand new ATR 72-212A (ATR 72-600) B-22216 (msn 1141) with 53 passengers and five crew members operating as flight GE 235  reportedly lost power this morning on takeoff on runway 10 at 1052 am (local time). The airliner was unable to maintain its climb and hit a vehicle and clipped a bridge with its left wing and crashed into the Keelung River, killing at least 16 people. The crew report a Mayday on the takeoff and an engine flame out. The ATR 72 had just departed from the old Songshan Airport (TSA) (Taipei International Airport) in downtown Taipei. The airport was built in 1936.

According to the airline, 22 people have safely reached the shore. 16 are confirmed dead. All others were rushed to area hospitals.

Google Map below: A: Location of bridge that was clipped and B: Final location of the aircraft in the river.

Top and Below Copyright Photos: Manuel Negrerie/AirlinersGallery.com. ATR 72-212A (ATR 72-600) B-22816 (msn 1141) was delivered new on April 15, 2014. It is pictured preparing to takeoff at Songshan Airport previously. Below, rescuers attempt to find everyone on board in the river.

Below Copyright Photo: Manuel Negrerie/AirlinersGallery.com. The ATR 72 unfortunately hit this yellow taxi on the bridge before careening into the river. The driver was able to get out of the vehicle with only minor injuries.

V Air (subsidiary of TransAsia Airways) (Taipei) will finally launch operations on December 17. The first route will be to Bangkok. The new low-fare airline issued this statement:

V Air, a Taiwan-based low-fare carrier, will launch routes from Taipei to Bangkok on December 17 and from Taipei to Chiang Mai on January 7, 2015 respectively– subject to final Thai Government approvals.

Copyright Photo: Manuel Negrerie/AirlinersGallery.com. Airbus A321-231 B-22608 (msn 6009) displays the bear livery as it arrives in Taipei (Sung Shan).

V air (subsidiary of TransAsia Airways) (Taipei) has repainted and unveiled its first Airbus A321-231 registered as B-22608 (msn 6009) into the new low-cost carrier’s bear livery. The TransAsia A321 was unveiled today on their Facebook page.  B-22608 will arrive at Taipei’s Songshan Airport very shortly.

TransAsia Airways (Taipei) 70-seat ATR 72-212A (ATR 72-600) B-22817 (msn 1145) operating as flight 222 crashed into residential buildings while attempting to make a landing at Magong Airport today (July 23) in the Penghu Islands with 54 passengers and four crew members on board. The brand new turboprop (delivered on May 14, 2014) had aborted its first attempt to land and was making a go around for its second attempt to land when it crashed into the village of Xixi in Penghu’s Huxi Township and burned. The aircraft was attempting to land when the last feeder band of departing Typhoon Matmo was hitting the islands. 48 people died (10 survived with injuries) in the crash according to the Civil Aeronautics Administration. The Penghu Islands are west of Taiwan in the Taiwan Straits.

Typhoon Matmo slammed into Taiwan yesterday (July 22) with heavy rains and strong winds and was departing the islands as the flight attempted to land.

TransAsia Airways flight 222 departed Kaohsiung International Airport bound for Magong Airport. The airliner was circling the island waiting for the weather to improve for landing when it lost contact with the tower as the feeder band of the storm lashed the island. The flight had been delayed at Kaohsiung waiting for the storm to pass the offshore islands.

Read the full report from the BBC (with photos): CLICK HERE

TransAsia pledges to take care of the families and officials defended the decision to fly into the departing storm. Read the update from Channel News Asia: CLICK HERE

TransAsia Airways (Taipei) as we previously reported, in January 2014 announced the name of its new low-fare subsidiary. The name V air (Wei Hang) was selected through a contest. The new logo featuring a black bear has just been unveiled today in Taipei.

The “V” is representative of the word “victory” and the well-known “V” hand signal according to the press release written in Chinese.

The first A321 will arrive in a few weeks and will initially be operated under TransAsia name and brand however it will be repainted in September into the new V air livery featuring a black bear tail logo.

TransAsia Airways (Taipei) has announced the name of its new low-fare subsidiary. The name V air (Wei Hang) was selected through a contest. A new logo will be developed. Two winners were announced and will receive free travel. The “V” is representative of the word “victory” and the well-known “V” hand signal according to the press release written in Chinese. The new airline is expected to launch operations later this year.

China Airlines‘ (Taipei) Board of Directors has elected company President Huang-Hsiang Sun as its new chairman.

Sun immediately set up a team to study the possibility of a new low-cost joint venture possibly with TransAsia Airways (Taipei).

According to Wikipedia, Kinmen or Quemoy is a small archipelago of several islands administered by Republic of China (Taiwan): Greater Kinmen, Lesser Kinmen and some islets. The islands are located off the coast of mainland China.

Kinmen is known for its shisa (wind lion god) figures.