UNI Air has updated its Airbus A321-200 corporate livery with the EVA Air livery design with the UNI Air southern cross tail logo. 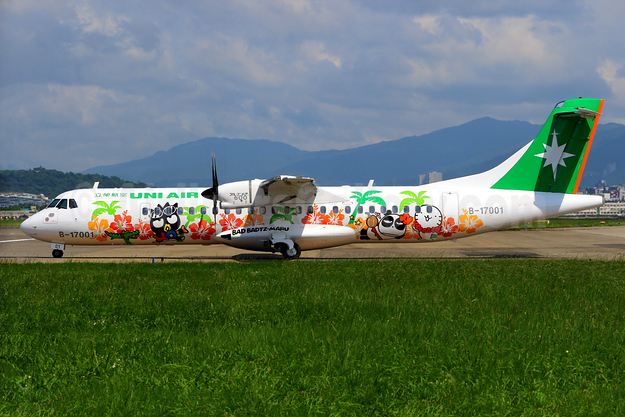 UNI Air on September 13, 2016 unveiled its first special livery on one of its new ATR 72-600s. The pictured B-17001 features the Japanese mangas (comics) named “Bad Badtz-Maru” [Bad Penguin], featuring some Sanrio characters.

This is a first time the EVA Air Group has applied this kind of livery of unique characters. The group is expected to drop some of their Airbus A330 “Hello Kitty” liveries in near future [the contract will soon be concluded). This unique ATR 72-600 will serve exclusively on domestic routes such as to Makung from Taipei Songshan Airport, in order to develop tourism in Taiwan.

UNI Air (subsidiary of EVA Air) (Taipei) yesterday (September 27) accepted at Toulouse its first new ATR 72-600. The delivery of B-17001 (msn 1044) is the very first ATR 72-600 aircraft in the livery of an Asian carrier. This ATR 72-600 is expected to enter revenue service on October 11, with a commercial domestic flight from Taipei to Taidong.

With the introduction of its new fleet of 10 ATR 72-600s, UNI Air will progressively replace its fleet of Bombardier DHC-8-300 turboprops.

Since ATR launched the -600 series aircraft in late 2007, the newest ATR 72-600 has proven itself as the best-selling 70-seat regional aircraft worldwide, with some 240 orders since then. The ATR 72-600 received its EASA-certification in May 2011, thus becoming the world’s most-recently certified 70-seat regional aircraft. Among other improvements, it features the most modern avionics suite, equipped with full-glass cockpit specifically developed for ATR by Thales, and totally redesigned cabin interiors, by Italian designer Giugiaro.

Copyright Photo: Eurospot. B-17001 is pictured at Toulouse prior to the handover in the new livery reflecting its relationship with parent EVA Air.

Parent EVA Air is intending to acquire six additional Airbus A321s to its existing order in order to replace the 11 UNI Air MD-90s. The MD-90s will be phased out between 2014 and 2016 according to Flightglobal.

Copyright Photo: Manuel Negrerie. B-17920 is rolled out of the hangar at Taoyuan International Airport (TPE) today in the new EVA Air-like look.

UNI Air (Taipei), a subsidiary of EVA Air (Taipei), has signed a contract with ATR for the purchase 10 new ATR 72-600s. Deliveries are scheduled to start in third quarter of 2012.

UNI Air will use its new ATR-600s to progressively replace its Bombardier DHC-8-300 aircraft.

The new ATRs will be equipped with advanced technologies such as a glass cockpit avionics suite and redesigned cabin interiors. The aircraft will feature Armonia cabin especially created for ATR by Italy’s Giugiaro Design and equipped for passengers’ enhanced comforts with lighter-weight slim-line seats and larger overhead bins that will accommodate a maximum number of carry-on bags.