The airliner is pictured arriving at the Ho Chi Minh City (Saigon) base. 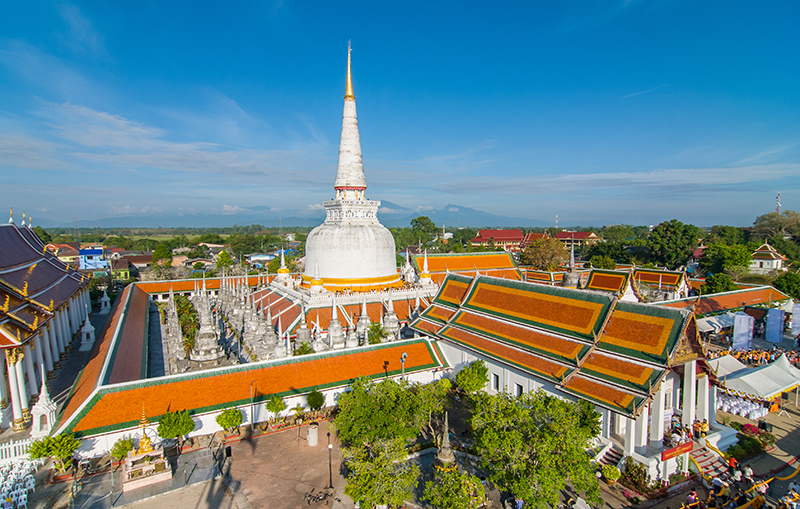 Hat Yai, a large district of Songkhla province in South of Thailand, is well-known as the center of trade, logistics, communications, transportation, and tourism of the province and the region. While Nakhon Si Thammarat and Khon Kaen are famous for their precious history. For Ubon Ratchathani, it is one of the four major cities of Isan, a region in northeastern Thailand, also known as the “big four of Isan.” Meanwhile, Surat Thani is a province in the lower southern Gulf of Thailand with many popular big and small islands around the province, including traveler’s favorite islands of Koh Samui. Let’s travel to these Thai top destinations with Vietjet. 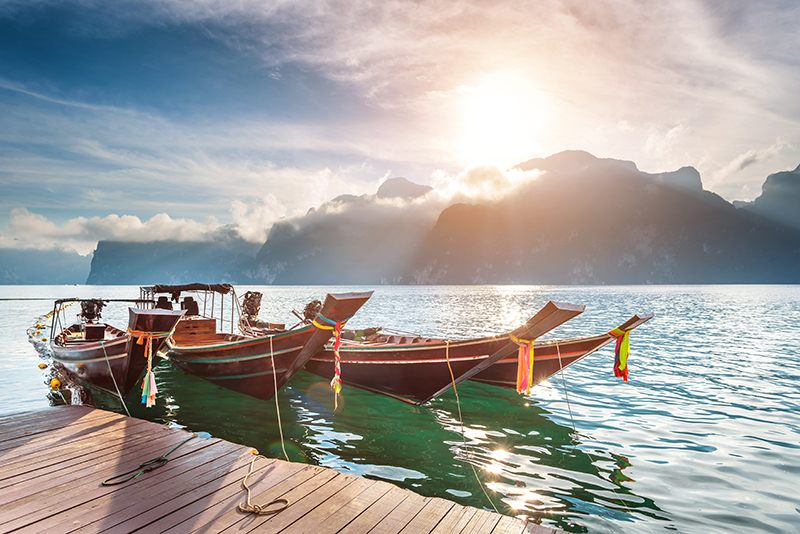 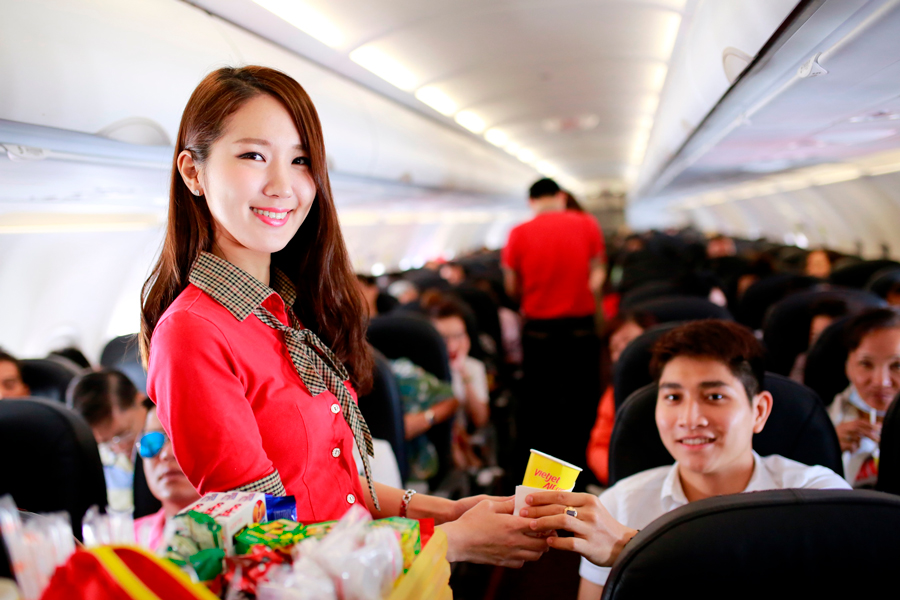 Currently, Thai Vietjet is operating stable flight operation covering Thailand domestic network including routes between Bangkok and Chiang Mai/ Chiang Rai/ Phuket/ Krabi/ Udon Thani. Passengers are recommended to check the regulations and procedures upon arrival of each destination city and airports for smooth entry. The airline also continuously increases flight schedules and extends its network in response to rising demand. Earlier, Thai Vietjet has offered 1-year complimentary travel to front line medical staff, including all members of Thai Covid-19 Prevention & Control Committee and all doctors and nurses of 160 appointed hospitals for treatment of Covid-19 patients in Thailand as a way to appreciate the heroes who have been working hard to prevent and control the outbreak until the situation is recovered.

In other news, following the announcement of Civil Aviation Authority of Thailand (CAAT) about re-opening Phuket International airport for domestic flight operation starting from June 13, 2020, Thai Vietjet is the first and only airline confirmed to resume operation of the route between Bangkok (Suvarnabhumi) and Phuket international airport to serve passengers demand from that date. The airline strictly complies with current safety and healthy procedures including measuring passengers and crews’ body temperature, social distancing at the airport and on-board the flights. Passengers are required to wear the face mask throughout the journey. 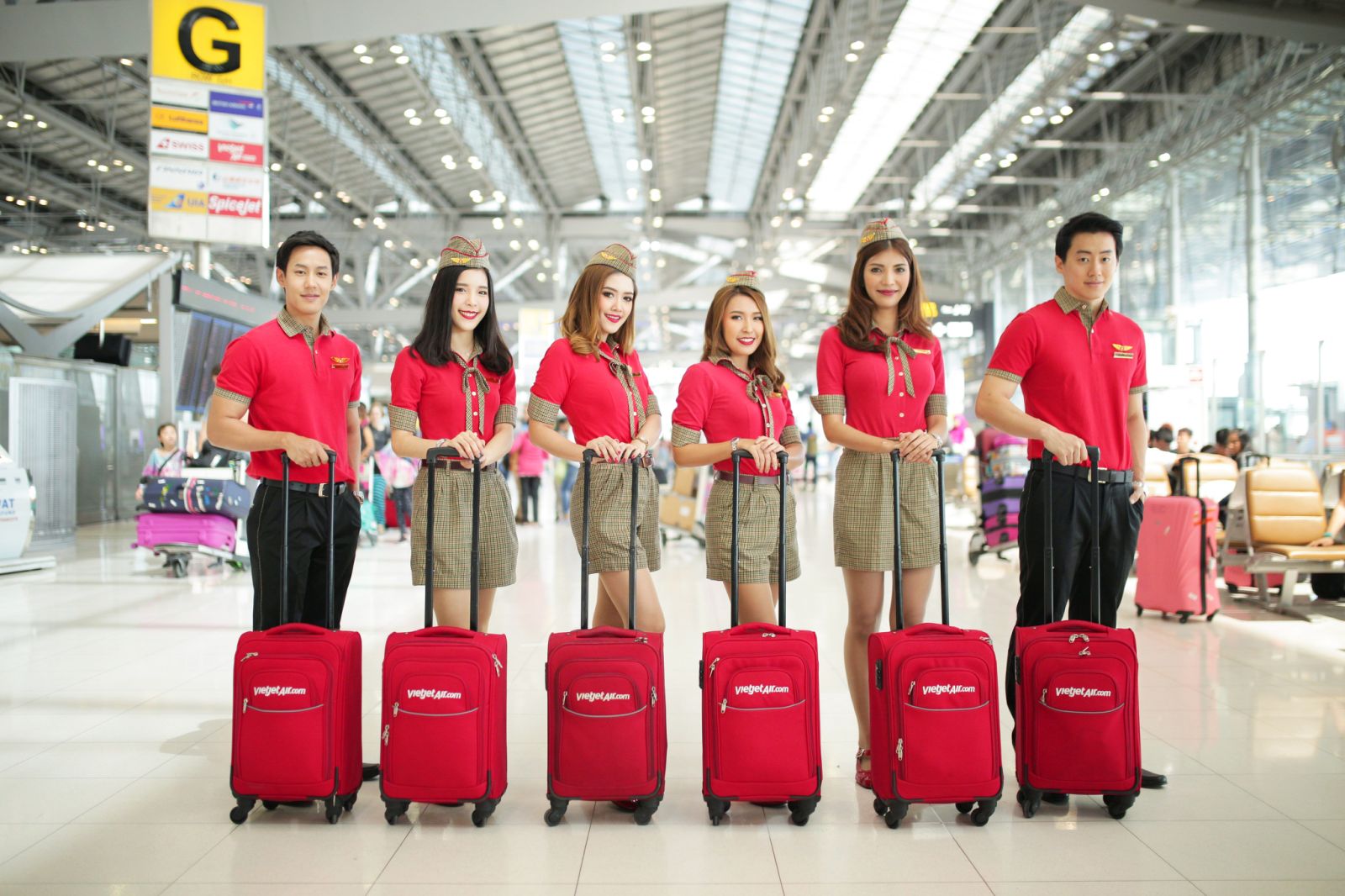 Flight VJ322 was operating from Duong Dong on Phu Quoc Island to Ho Chi Minh City. The A321 landed on runway 25L in heavy rain, but skidded off the runway into a grass field after crossing two taxiways.

Vietjet has announced that it will add the Airbus A321XLR to its fleet, with a firm order for 15 aircraft and the conversion of five A321neo aircraft from its existing backlog. The announcement was made during a visit to Airbus headquarters in Toulouse by Vietjet President & CEO Nguyen Thi Phuong Thao, hosted by Airbus CEO Guillaume Faury.

During the visit, the airline also signed a new training agreement with Airbus Services. This will see Airbus position two new A320 Family full flight simulators at the carrier’s training centre in Ho Chi Minh City. Airbus will also provide a range of training services to the airline and its instructors.

Vietjet will be among the first airlines to receive the A321XLR. The addition of the aircraft to its fleet will allow Vietjet to further expand its network, flying longer routes across Asia, as well as to destinations as far afield as Australia and Russia.

Including this announcement, Vietjet has now ordered a total of 186 A320 Family aircraft, of which 60 have been delivered. The airline’s outstanding Airbus backlog is entirely composed of A321neo aircraft.

The aircraft will deliver an unprecedented Xtra Long Range of up to 4,700nm – with 30% lower fuel consumption per seat, compared with previous-generation competitor jets. At the end of September 2019, the A320neo Family had received more than 6,650 firm orders from nearly 110 customers worldwide.

Novus has releases this statement:

Global aircraft leasing and financing company Novus Aviation Capital and new-age carrier Vietjet Air have signed a Memorandum of Understanding (MoU) for the financing and leasing of 10 aircraft over the next 18 months. The investment is valued at approximately $1.3 billion at list price, encompassing a combination of operating and finance leases. The aircraft will be a mix of single aisle aircraft from Vietjet’s order book.

Boeing and Vietjet confirmed that the innovative and growing Vietnamese carrier has purchased 100 additional 737 MAX airplanes, taking their MAX order book to 200 jets. During a signing ceremony today in Hanoi, United States President Donald Trump and Vietnamese Communist Party General Secretary and President Nguyen Phu Trong joined leaders of both companies to unveil the $12.7 billion order, according to list prices.

The deal includes 20 MAX 8s and 80 of the new, larger MAX 10 variant, which will have the lowest seat-mile costs for a single-aisle airplane and be the most profitable jet in its market segment. The order was previously unidentified on Boeing’s Orders and Deliveries website.

In ordering 80 MAX 10s, Vietjet becomes the largest Asian customer of the airplane type. The carrier plans to use the added capacity to meet growing demand across Vietnam, as well as to serve popular destinations throughout Asia.

“The deal for 200 Boeing 737 MAX airplanes today is an important move for us to keep up with our international flight network expansion plan with a higher capacity, thus offering our passengers with more exciting experiences when being able to fly to more new international destinations,” said Madam Nguyễn Thị Phương Thảo, President and CEO of Vietjet. “I believe that our fleet will have breakthroughs thanks to new-generation technologies, which helps improve flight quality and enhance operational reliability, while reducing operating costs in the future. Passengers will then have more opportunities to fly with reasonable fares. The contract signing ceremony, which is witnessed by the top leaders of Vietnam and the US on the occasion of the US-North Korea Summit in Hanoi, will mark a milestone in the two companies’ growth path.”

Vietjet placed its first order for 100 737 MAX airplanes in 2016, which set the mark for the largest commercial jet purchase in Vietnam’s aviation sector at the time.

In addition to airplane purchases, Boeing will partner with Vietjet to enhance technical and engineering expertise, train pilots and technicians, and improve management capabilities at the airline and in Vietnam. 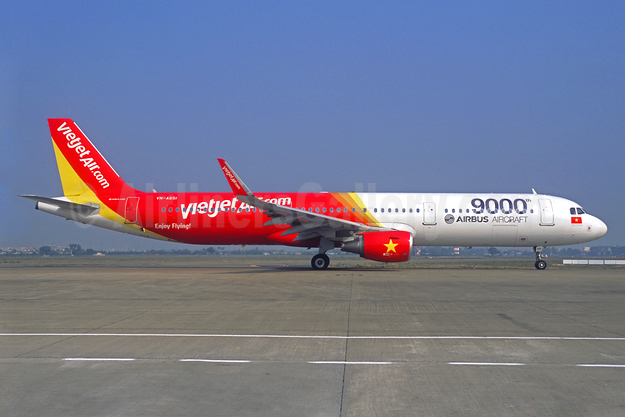 The new purchase agreement increases the number of A320 Family aircraft ordered by Vietjet to 171, of which 46 have already been delivered. This leaves the airline with a backlog of 125 aircraft on order with Airbus for future delivery, comprising 120 A321neo and five A321ceo.

Vietjet has signed a Memorandum of Understanding (MOU) with Airbus for the purchase of an additional 50 A321neo single aisle aircraft. The agreement was announced at the Farnborough Air Show today by Vietjet Vice President Dinh Viet Phuong and Eric Schulz, Airbus Chief Commercial Officer.

The latest agreement will see the carrier’s backlog of orders for the A320 Family rise to 129 aircraft, including 123 A321neo and 6 A321ceo. Vietjet will use the additional aircraft to meet growing demand for its services on both its domestic and international networks.

Vietjet first took to the skies in 2011 and now operates an all-Airbus fleet currently comprising 59 A320 Family aircraft. The carrier’s route network already spans the whole of Vietnam and some 30 destinations across Asia.

Boeing and VietJet signed a Memorandum of Understanding (MOU) today at the 2018 Farnborough International for an additional 100 737 MAX airplanes. The agreement, which includes 80 737 MAX 10s and 20 737 MAX 8s, is valued at more than $12.7 billion at current list prices.

The Vietnamese low-cost carrier will become the largest MAX 10 customer in Asia once the deal is completed. VietJet plans to leverage the added capacity of the MAX 10 to satisfy surging demand on high-dense domestic routes, as well as on popular destinations throughout Asia.

As part of the agreement, Boeing would partner with VietJet to enhance technical and engineering expertise and the training of pilots and technicians in Vietnam, helping to further develop the commercial aviation ecosystem in the growing country. Boeing will also support VietJet in improving management capabilities at the airline and in the country.

VietJet is Vietnam’s first privately-owned airline and is also the first low-cost carrier in the country. The airline is in the midst of bolstering its world-class fleet with highly efficient and capable airplanes that will allow for expansion of its regional network.

In 2016, VietJet finalized an order for 100 high-capacity 737 MAX 8 airplanes, which set the mark for the largest-ever single commercial airplane purchase in Vietnamaviation.

The deal will be reflected on Boeing’s Orders and Deliveries website once it is finalized.

All images by Boeing. 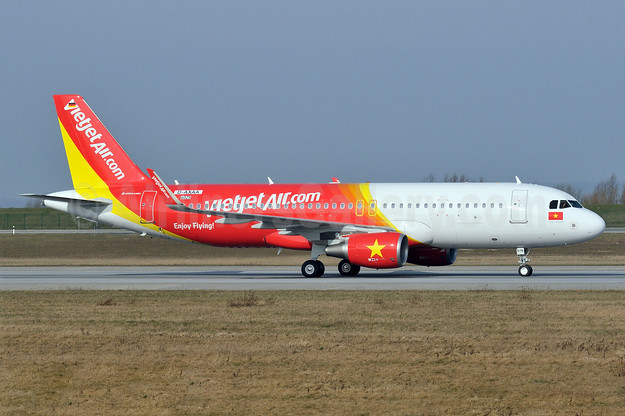 The Hanoi – Taichung route will be operated with 5 return flights per week on every Monday, Wednesday, Friday, Saturday and Sunday from June 22, 2018 with around two and a half hours flight time per leg. The flight departs from Hanoi at 13:00 and arrive in Taichung at 16:30 (local time). The return flight takes off at 17:30 (local time) in Taichung and lands in Hanoi at 19:20.

The Danang – Daegu route will be operated on a daily basis from July 19, 2018 with around four and a quarter hour flight time per leg. The flight will depart from Danang at 00:15 and arrive in Daegu at 06:30 (local time). The return flight will take off at Daegu at 07:30 (local time) and lands in Danang at 10:00every day.

Daegu is the fourth largest city of South Korea, after Seoul, Busan and Incheon.

Vietjet has made this announcement:

Vietjet is on a high note in France recently as it received its newest Airbus A321 which bears the official logo of the 45th anniversary of the establishment of diplomatic relations between Vietnam and France. The hand-over ceremony took place in the presence of His Excellency

Speaking at the ceremony, Vietjet Managing Director Luu Duc Khanh, said: “It is our great honor to have our aircraft emblazoned with the official logo for the 45th anniversary of the Vietnam – France diplomatic relations. This is a meaningful tribute that acknowledges Vietjet’s continual efforts to introduce a vivid image of an innovative and integrated Vietnam to the international community. Standing high from profoundly comprehensive collaborations among Vietjet and French partners, we would contribute more to the development of economic – cultural – trade cooperation between Vietnam and France.”

The newly added A321 is the 43th of a total 121 aircraft that Vietjet has ordered from Airbus. This delivery is the fastest ever handover made between the two companies. The new aircraft boasts a wide cabin with a logical configuration that will give passengers extra comfort so they can enjoy a superlative flying experience with Vietjet. The latest addition to Vietjet’s expanding fleet will allow the airline to pursue its strategy to improve its services and to expand operation to farther destinations in South Korea, Japan, India, Australia and other destinations in the Asia-Pacific region.

The official logo for the 45th anniversary of diplomatic relations between Vietnam and France was unveiled by the French Embassy in Hanoi on January 24, 2018.

In another important event in France, Vietjet signed a comprehensive agreement with Safran – CFM worth US$6.5 billion for the supply of 321 engines to power the airline’s 148 aircraft as well as fleet management services, training, R&D programs (for example, in fuel efficiency), and technical management. Safran – CFM will also help the airline develop regional-level support maintenance capabilities.

Also in France, Vietjet leaders also inked a finance agreement with GECAS France on purchasing and leasing six A321neo aircraft worth US$800 million.