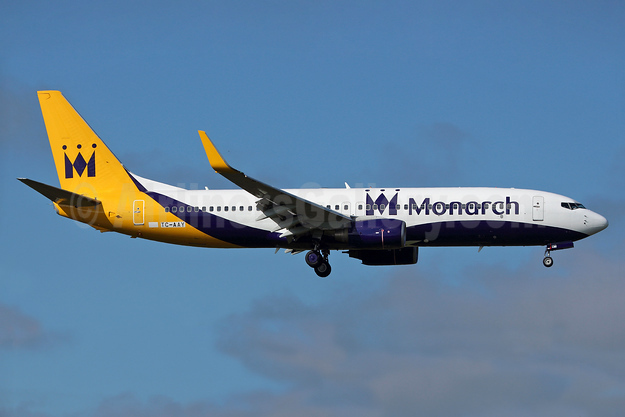 The pictured Pegasus Airlines TC-AAY is seen arriving at the Birmingham base on May 18, 2017 on lease for the summer for crew familiarization before the new Boeing 737 MAXs arrive.

The new type will be operated this summer as G-ZBAV.

The company describes the VIP tour:

The Four Seasons Private Jet Experience comes to life through a variety of extraordinary itineraries that crisscross the globe and allow you to discover up to 10 international destinations on a single private jet journey. Whether you want to travel around the world or delve into the cultural life of a specific region, your adventure awaits.

Video: The painting of G-TCSX:

Video: An inside look:

Monarch Airlines (London-Luton) has announced two new routes from Birmingham Airport – to Salzburg and Turin – as part of its winter ski program for 2014/15. Flights will commence on December 13, 2014.

Flybe (Exeter) on April 10 celebrated the inaugural flight of eight new routes to operate from Birmingham Airport with passengers taking off to Cologne/Bonn on the carrier’s distinctive Bombardier DHC-8-402 (Q400) signature purple aircraft (above).

On the same day, Flybe also took off on the first of its daily flights to Florence – the first time ever this route has been offered out of Birmingham. This was followed on April 11 with the airline’s inaugural flight to Porto (four days a week) and its four-days weekly service to Alicante (started on April 12).

The remaining four of Flybe’s new routes from Birmingham will take off in May, with Bordeaux, Palma de Mallorca and Toulouse starting on May 13 and Newquay on May 16.

With a record 12 aircraft based at the airport, Birmingham has become Flybe’s largest base. This summer, it will be operating 32 routes to and from Birmingham with a total choice of up to 381 return flights a week.

Biman Bangladesh Airlines (Dhaka) as planned, operated the last revenue passenger flight of a McDonnell Douglas DC-10 yesterday (February 24). The last flight was a charter flight (flight 008) from Birmingham with the pictured DC-10-30 S2-ACR (msn 48317) with 200 passengers eager to fly the last flight. The DC-10 type has flown passengers for nearly 43 years and continues today as a freighter with several cargo airlines.

Bottom Copyright Photos: Allan Huse. A picture of the flight crew and the cockpit for the last flight from Birmingham. The seats in the middle were not sold. Only the window and exterior aisle seats were sold on the last flight.

Video: Amateur video of one of the enthusiast charter flights from Birmingham:

Copyright Photo: Gordon Stretch. Boeing 777-240 ER AP-BGK (msn 33776) arrives at Birmingham in the new look. The company has also added back "Pakistan International" on the fuselage.

Bmibaby (bmibaby.com) (East Midlands) has modified its color scheme with the first aircraft being this Boeing 737-59D G-BVKB (msn 27268). The former “Children in Need” special color scheme (with balloons) has now been repainted. A new red “Tiny” emblem now adorns a light blue tail. G-BVKB has also been renamed “Jelly Bean”. The use of “Tiny” now matches the use of the figurine on its website.