From KOMO in Seattle:

The airline confirmed 23 flights into and out of Paine Field were canceled because FAA restrictions mean the Embraer E175 airplane can not land in poor weather or low visibility because 5G could possibly interfere with systems.”

The airline confirmed 23 flights into and out of Paine Field were canceled because FAA restrictions mean the Embraer E175 airplane can not land in poor weather or low visibility because 5G could possibly interfere with systems.https://t.co/ppsl6lfIdv

Tomorrow’s weather forecast doesn’t show much improvement over today; so please check your flight status with @AlaskaAir prior to leaving for the airport. pic.twitter.com/KxbBpmQkZM

Alaska Airlines is canceling all flights in and out of Paine Field amid foggy weather and concerns about 5G. https://t.co/hb0iUhxuDB

Alaska Airlines will begin operating its own Boeing 737 aircraft from Paine Field in Everett.

Boeing 737 service from PAE to Phoenix starts on February 17 followed by Las Vegas on March according to Herald Net.

In the next two months, Alaska Airlines will begin flying bigger jets on two of its 12 routes out of Paine Field, @JanicePods reports.
https://t.co/CmaUuqQV70

Propeller Airports has announced it will close the Paine Field terminal until August 1. All passenger services will be suspended from May 22 through July 31.

The company will use the closure time to complete aircraft ramp maintenance and repairs.

Previously Alaska Airlines had announced it was reducing service at PAE to just one flight a day due to low demand.

San Juan Airlines has announced it will become the third scheduled airline at Paine Field in Everett, WA (PAE).

Staring on May 1, 2019, the local carrier will fly from PAE to the San Juan Islands.

All images by the carrier. 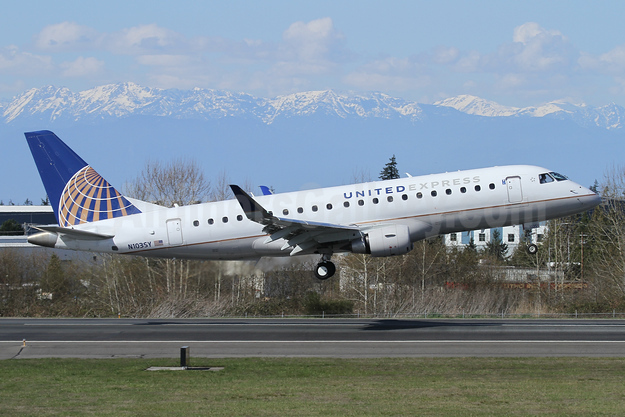 Alaska Airlines issued this story on their blog:

At 10 a.m. today, Alaska Airlines Flight 2878, with service provided by Horizon Air, made history when it departed from Everett to Portland.

“This is a huge moment for Horizon, and being here you can see what a big deal it is for the local area. This is what we’re all about,” said La’Princia Miller, a Horizon Air flight attendant.

The aircraft – with 76 guests and four crew members onboard – became the first flight from the new commercial air terminal at Paine Field-Snohomish County airport, unleashing a wave of pride, excitement and so many possibilities.

“This is a game changer. From where I live, the traffic is very predictable coming to Paine Field, like 20 minutes to get here. That’s really nice,” said Joan Carstons, who lives in Kirkland. “Going to Sea-Tac, there can be a wreck or something else happening that day that could cause a longer drive.”

“This is history in the making. I’m just so excited to be a part of it and serve the community I come from,” said Michelle Tagalog, Horizon Air customer service agent who lives in nearby Lynnwood. “Our goal is to give our guests a great travel experience that gets them through the main door and into the terminal in just a few minutes.”

When Paine Field was first planned during the 1930s, it was supposed to be a commercial airport. Instead, it became a different economic engine tied to the aerospace industry in Snohomish County. But now that original goal is a reality: Paine Field is home to the nation’s newest passenger air terminal – and Alaska is helping lead the way.

Today, just three flights departed from Paine Field. By mid-March, we’ll have our full schedule of 18 daily nonstop departures to 8 West Coast destinations that are most popular with our guests. Horizon Air is providing the all-jet service on the Embraer 175 aircraft, which features first class and premium class seating.

Paine Field makes catching a flight easier for more than one million people living in North Puget Sound. Many will enjoy shorter commutes to the airport: more time in the air and less time on the roads, which will ease traffic congestion.

We’re getting super excited! Our first flights from Paine Field in Everett, Washington take off March 4. We’ll soon have 18 daily nonstop departures to 8 terrific West Coast destinations. For so many of our guests – especially those who live in North Puget Sound – this new airport will be a game-changer.

Today, we’re sharing a sneak peek of what’s in store:

Before flying out of Paine Field for the first time, you may be wondering the best route to get there, where to park, and what food and drink options you’ll have. Propeller Airports – which operates the new terminal – has launched a website to help travelers plan their trips. We recommend checking it out!

From the Alaska Airlines blog:

If you live north of Seattle and throughout Snohomish County, we’re ready to make your day with some news you’ve probably been waiting to hear: We’re now selling tickets for 18 daily nonstop flights between Paine Field in Everett, Washington, and eight West Coast cities.

Say hello to Alaska flights at a more convenient, brand new airport terminal, and goodbye to a potentially much farther drive south to Sea-Tac Airport.

The first day of scheduled service is Feb. 11, 2019, subject to government approval. The all-jet service from Paine Field will be provided by Horizon Air flying the Embraer 175 aircraft featuring first class and premium class cabins.

“We’re tremendously honored to be a part of this historic moment with the opening of a brand new commercial airport,” said Andrew Harrison, Alaska Airlines’ chief commercial officer. “Providing all new service from Paine Field and further expanding where we fly our guests, including from our Global Partners’ major international hubs, highlights the strong growth in our region and a thriving West Coast.”

To celebrate the start of ticket sales, we’re offering a two-day sale on fares to and from Paine Field, starting at low as $39 one-way*. And for all nonstop flights flown to and from Paine Field through March 31, 2019, Mileage Plan members will earn double miles after they register for a special promotion**.

After the initial start of service on Feb. 11, the planned daily flight frequencies will increase over the course of several weeks to ensure new operations are running smoothly. Here’s how that looks on our flight schedule: