Luxair has made this announcement:

As the 60th anniversary of the first Luxair flight approached, operated on March 31, 1962 to Paris Le-Bourget, the airline launched an appeal to artists from Luxembourg and the Greater Region to imagine its next special livery.

In April 2022, a pre-selection established by Luxair staff members, made it possible to select eleven designs, then in May, the winner, Marco Weiten (below), was elected by a professional jury of artists and art experts as well as by the management of Luxair.

Renaissance, future, tradition … so many illustrations tell the story of Luxair’ on its new special livery. Drawn by the Luxembourgish artist Marco Weiten, this mix of colors represents the indisputable Luxembourgish symbol Roude Léiw which rises from its ashes like a phoenix, to celebrate the 60 years of Luxair.

Welcome to our new #FlyingIsAnArt livery by @marcoweiten! 🥳️
After getting many inspiring designs from a lot of artists, Marco Weiten has captivated us with his vision of the future.
Celebrate our 60th anniversary with us and fly forward with #Luxair ✈️ pic.twitter.com/mnWlZY9dnX

On February 28, 2022, as the 60th anniversary of the first Luxair flight approached, operated on March 31, 1962 to Paris Le-Bourget, the airline launched an appeal to artists from Luxembourg and the Greater Region to imagine its next special livery.

The waiting is over… on June 29, 2022 the airline finally unveiled its #FlyingIsAnArt Anniversary edition!

For this third edition of #FlyingIsAnArt, Luxair invited artists to draw their vision of the future of the airline, while highlighting the values of inclusion, diversity, audacity and innovation. The competition was a great success and the company received more than sixty works overflowing with creativity, each one more original than the other.

In April, a pre-selection established by Luxair staff members, made it possible to select 11 designs, then in May, the winner, Marco Weiten, was elected by a professional jury of artists and art experts as well as by the management of Luxair.

The Boeing 737-800, registered LX-LGV, dressed in Marco Weiten’s designs symbolizing the rebirth and promising future of Luxair, took off for the first time on Wednesday, June 29, 2022 transporting its passengers to Tenerife.

“60 years of Luxair, flight, history, power, energy and skill, serenity and the desire to give the best. Let’s celebrate 60 years together with this lively design. Luxair’s colors symbolically run through the different decades and unite in a strong Luxembourg symbol, the red lion. It represents a Luxembourg tradition, but here it rises from its ashes like a phoenix and all the colors converge in it, the dawn of a fantastic future. All together we are a positive sign of respect, competence, teaching and practice. At 60 years, Luxair is just beginning to fly… the future is now.”, Marco Weiten.

Air Serbia and Luxair have established a new partnership agreement.

In other news, Air Serbia is increasing the number of flights to Montenegro with this announcement:

Due to high demand, Air Serbia has provided in July a total of 12,340 additional seats on flights to the Montenegrin coast. The Serbian national airline has made additional 10,228 seats available to passengers by introducing 43 round trip flights to Tivat this month. Also, the introduction of a different aircraft type on existing flights on this popular route has made another 2,160 seats available.

With reference to the concerned changes, Air Serbia will operate up to 54 flights a week to Tivat in July, while the number of daily flights on this route will range from six to as many as eight.

In July, Air Serbia plans to operate three daily flights to Podgorica, that is, up to 21 flights a week, and Serbia’s flag carrier will operate a total of 322 round trip flights to both of its destinations in Montenegro. In order to provide greater capacity, one return flight to Podgorica on Sundays will be performed by an Airbus A330 with 257 seats. 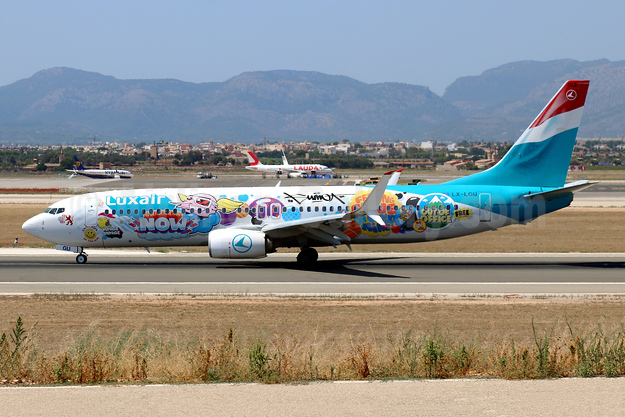 LX-LGU is the Luxair’s brand new special livery designed by SUMO!, a Luxembourgish artist and national figure of contemporary art which Luxair has decided to entrust with the mission of revamping two aircraft of its fleet: a Boeing 737-800 LX-LGU and later a Bombardier Q400 LX-LQA.

According to the airline, 11 people and 200 hours of artistic creation, an 19 hours to fix the decals on the planes  were dedicated for the first aircraft of this project.

Plane spotters and travellers at Luxembourg airport will soon be astounded to see a Luxair plane sporting surprisingly bright colors and positive messages.
A unique look designed by Sumo.

Luxair wanted to offer its passengers a unique travel experience, combining art and travel. These two worlds are naturally entwined. The art of travel, the art of getting away from it all and leaving behind all those difficult months to rediscover the pleasure of travelling safely.

Sumo is a Luxembourgish artist and national contemporary art icon, who celebrates its 25th year of painting. Luxair therefore decided to entrust the artist with the make-over of two of its planes, a Boeing 737-800, registered under LX-LGU, and a de Havilland Canada Q400, registered as LX-LQA.

Christian Pearson, aka Sumo, is in charge of these makeovers that will transport Luxair passengers to new horizons with his new colorful landscapes and imaginary characters.
Sumo has dressed the fuselage with a vibrant and harmonious outfit featuring happy figures and messages. The artist will also be let loose on the cabin interior. The head rests are soon to be decorated with fresh and invigorating designs, whilst pictures of his works will also be displayed at various points in the cabin.

Sumo’s works with his wild yet controlled signature style reveal themselves the more you contemplate them. His dynamic designs are in keeping with his feisty and colossal alias, as they induce powerful sensations, whilst his words make you feel good and entice you to travel.

Luxair has created the first flying gallery in Luxembourg thanks to this collaboration. Passengers on board one of these aircraft will be able to admire the unique creations until March 2021.

Luxair is also proud to be able to promote a Luxembourgish artist through this experience by transporting his works of art across Europe. 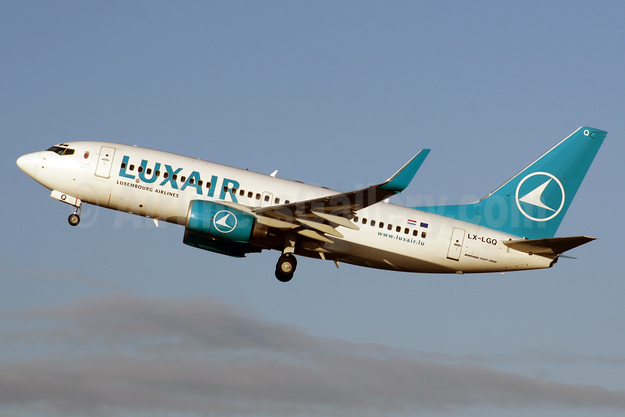 Luxair Luxembourg Airlines will take delivery of two additional Boeing 737-700 aircraft with 142 seats each in March and May 2019.

As extra capacity is required in the short term, it was decided to opt for two planes currently operated by a large European flag carrier. These aircraft meet all Luxair safety, quality and comfort standards.

The LuxairGroup fleet will then have 8 Boeing 737s and 11 Bombardier Q400s.

This significant increase in capacity will allow LuxairGroup not only to consolidate, but also to expand its network whilst stimulating growth. To do so, Luxair Luxembourg Airlines and LuxairTours started to implement a series of changes in their flight plan.

Luxair (Luxembourg) has reached a new tentative collective labor agreement with its staff and the unions. The agreement is subject to final ratification vote. This follows union protests in October. The airline is expected to save up to 8 million euros ($9.4 million) annually according to the Luxembourg Wort.

Luxair (Luxembourg) will operate summer seasonal service from Luxembourg to Olbia (twice weekly with Bombardier Q400s) from May 17 through September 27, 2015 per Airline Route.

In addition, the carrier will also operate to Palermo starting on May 24, 2015 with Embraer ERJ 145 regional jets. From July 5 through September 13, 2015 the airline will operate a Luxembourg-Malta-Palermo-Luxembourg routing.

APB’s newest program is the culmination of a five-year design effort using the latest computational fluid dynamic technology to redefine the aerodynamics of the Blended Winglet into an all-new Split Scimitar Winglet. The unique feature of the Split Scimitar Winglet is that it uses the existing Blended Winglet structure, but adds new aerodynamic scimitar tips and a large ventral strake.

Split Scimitar Winglets can now be installed on all Boeing 737-800 and 737-900ER aircraft. All remaining commercial and private variants of the 737 Next-Generation aircraft are scheduled to be certified by May of 2015.

Luxair-Luxembourg Airlines (Luxembourg), the national airline of the Grand Duchy of Luxembourg, has placed a firm order for another Bombardier DHC-8-402 (marketed as a Q400) turboprop airliner and has also taken an option for an additional aircraft. The airline currently operates a fleet of six DHC-8-402s.