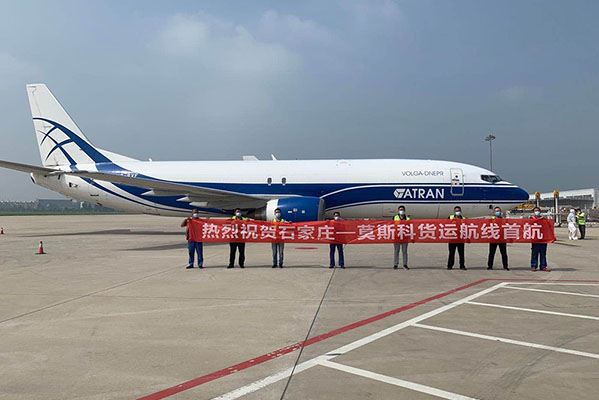 ATRAN Airlines, express air cargo carrier within Volga-Dnepr Group, has expanded its network with bringing Shijiazhuang (China) into the loop. The carrier intends to operate the flights on a weekly basis to Vnukovo International Airport in Moscow (Russia) where it is based.

The maiden flight, which was operated on August 8, 2020, lifted almost 15 tons of e-commerce-related consolidated cargo. ATRAN is planning to deploy both types of its freighters — Boeing 737-400SF and Boeing 737-800BCF — to guarantee high-quality services for its customers and final consignees who expect on-time delivery of their online purchases. 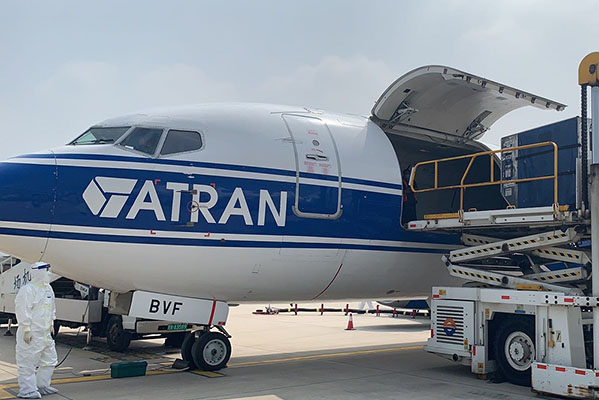 With Shijiazhuang being the capital of Hebei Province and neighboring Beijing and Tianjin to the north, the city covers the catchment area of North China. After booming growth of e-commerce and its penetration across first-tier cities of China, second-tier cities, likes of Xi’an and Shijiazhuang, are becoming active game-players and accumulate stable traffic to Russia.

Shijiazhuang is the latest addition to ATRAN’s network which complements existing Xi’an, Nanjing, Hangzhou, Urumqi and Zhengzhou most effectively and will provide greater delivery options for ATRAN’s customers.

Atran Airlines, the Russian air express carrier within Volga-Dnepr Group, has enlarged its fleet with the delivery of its first Boeing 737-800BCF (VQ-BFS), increasing its total number of freighters to five.

Having successfully completed certification of the Boeing 737-800BCF in Russia, the airline will be the first to operate this type of freighter, enabling Atran’s customers to benefit from its enhanced operational capabilities and more solutions for cargo deliveries.

The additional airplane will boost the carrier’s capacity and guarantee a wider choice of logistics solutions for its customers linking routes between Russia, the CIS and Europe. The freighter has already operated its first flights from Moscow (Vnukovo) to Norilsk and Yakutsk carrying much-needed essential consumer goods for the population of the Siberian and Far Eastern parts of Russia, including perishables, general cargo and e-commerce shipments.

In addition to accommodating 11 standard aviation pallets (2235×3175 mm) and containers in the cargo compartment, the Boeing 737-800BCF incorporates a reconfigurable cargo handling system which can be easily adjusted for various types of ULDs. Its advanced technical characteristics, together with ICAO Stage 4 noise certification, make it an ideal aircraft for European short and medium-haul cargo operations, enabling easy and seamless deliveries of express and mail consignments.

Boeing (Chicago, Seattle and Charleston) and Volga-Dnepr Group (Moscow) (Volga-Dnepr Airlines, Atran Airlines and AirBridgeCargo Airlines), a world leader in transportation of unique, oversize and heavy cargo, have signed a Memorandum of Understanding (MOU) to further the Group’s fleet expansion with 20 additional 747-8 Freighters (above), valued at $7.4 billion at list prices.

The agreement also adds the Antonov-124-100 aircraft (below) to the long-term logistics support for Boeing and its partners.

Boeing and Volga Dnepr have a long history of successful partnership. The Group has already supported Boeing in a number of shipments. The unique technical abilities of the Antonov 124-100, along with Volga-Dnepr’s 25 years of global operations and experience gained in transportation of aviation equipment, will further serve Boeing’s logistics needs.

For Volga Dnepr Group, adding more 747-8 Freighters will allow development of the Group’s scheduled business, AirBridgeCargo Airlines (ABC), and keep the airline’s high growth rates. Volga-Dnepr Group was the first to order the Boeing 747-8 Freighter in Russia and took delivery of its first 747-8 Freighter in 2012. These additional 20 airplanes will be acquired through a mix of direct purchases and leasing over the next seven years.

Volga-Dnepr Group has represented the Russian airfreight industry in the international market since 1990. The Group, which includes three leading Russian all-cargo carriers – Volga-Dnepr Airlines, AirBridgeCargo Airlines and Atran Airlines – has a multinational team of 3,500 employees in fifteen countries.